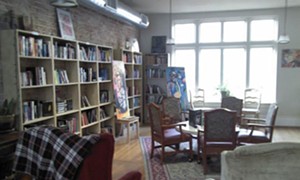 In one short year, Poor Richard's Book Shoppe established itself as a home for alternative expression, not exclusively but especially for artists of color. It filled a vital need in Charlotte's arts landscape and became a hub of creativity. Inside that brick loft off the cobblestones of Brevard Court was a feeling something like Harlem, something like Atlanta - something like Charlotte. Poor Richard's hosted readings for Charlotte playwright Stacy Rose's Gentrification! (Rose is now a fellow at NYU's Tisch School of the Arts); Naked Arts free-form musical performances; the best regularly scheduled live jazz party in Charlotte; unplugged acoustic performances; book signings; public discussion forums; free meditation classes; and more. PRBS had just obtained its bar license when a leasing dispute closed the doors this April. Owners Sheri and Bryan Borges have been scouting other locations, and we've got our fingers crossed for news of a grand reopening.