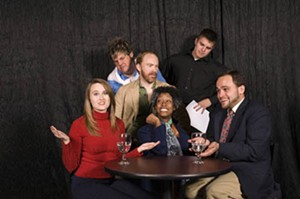 She doesn't always get the roles that bring out her best - like the Country Mouse in Mouse Tails, in 2007, or the female lead in Rosencrantz and Guildenstern Are Dead, this past January - but Tania Kelly puts her best into whatever she gets. And when Kelly collides with a role that allows her to show out - say Vixen, in Actor's Theatre's Yuletide triumph of 2008, The Eight: Reindeer Monologues - it offers a glimpse of how phenomenal she can be. Even Kelly's venison Vixen was upstaged by her exploits as Charlotte, the hyper-eccentric therapist in Christopher Durang's Beyond Therapy. That screamingly funny performance at Petra's Piano Bar in November outsparkled anything else we saw last season.