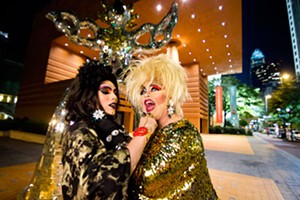 Two ab-fab examples of putting the Queen into the Queen City. BethAnn Phetamine can shoot (and lick) sparks off a grinder chest plate. She can whip past brunch patrons on roller skates while wearing a white afro. While she may be the main attraction at Snug Harbor's Thursday night Shiprocked shows, what makes BethAnn stand out is not her stunts - it's her heart. Born in a small South Carolina town, the erstwhile Justin Cregos is one of the most genuine queens you'll meet off stage. She'll tell you in a shy, genuinely puzzled voice how Wet Willie's slushies will fuck you up. For a good time, get drunk with this queen. And for a fabulous time, there's Buff Faye. No drag queen can be in two places at one time, but Buff Faye certainly tries. She performed at the Queen's Fab Fest at Queen City Theatre Charlotte and, when she wasn't in full drag for its Wizard of Oz sing-along, she was running a Campus Pride auction by the door as her male self, Shane Windmeyer. She also won the runway category at the Transfaith in Color Sweet-T Mini Ball last month. If any drag queen could solve Syria and the jobs crisis, it would be Buff Faye. She could probably whip Obama and Romney both. No, really - she could whip them.