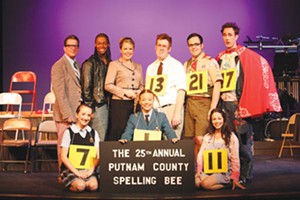 He first began attracting notice three years ago as Savage Red, one of the weirdest characters in ThomThom, Matt Cosper's truly weird take on To Kill a Mockingbird. But Jeremy Shane has been no less memorable in everything since: Captain Braid Beard in How I Became a Pirate, an elephant and a hypochondriac in Junie B... Batman Smells and, most impressive, William Barfee, wielder of the magic spelling foot in Theatre Charlotte's 25th Annual Putnam County Spelling Bee. That performance, in no way inferior to the Tony Award winner on Broadway, cemented Shane's stature as Charlotte's alpha slob, a sheer comedy delight.