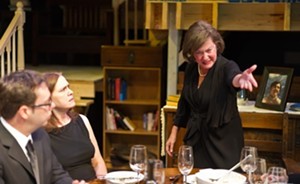 In its first year at its nifty new digs in NoDa, CAST wasted no time in tackling unprecedented challenges - and triumphing. Most impressive was its exemplary production of Tracy Letts' three-act and three-story-tall August: Osage County, a spectacle that left no doubt why the script won the Pulitzer. Later in the season, CAST's first-ever musical, Floyd Collins, was another bold departure. No less heartening than the company's willingness to jump in and accept the new challenges of a new venue was its willingness to open its doors to younger groups like Treehouse, Machine, Dysfunctional Figurines and 700 Miles South.