Life's a drag: Charlotte's queens had to fight for the right to be themselves

To celebrate La Cage Aux Folles, Jerry Herman's famous musical about two drag queens that runs at Belk Theater from May 29 to June 3, CL looks at drag culture in Charlotte — where it's been, where it is, and where it's going — through the eyes of local performers, both young and old. 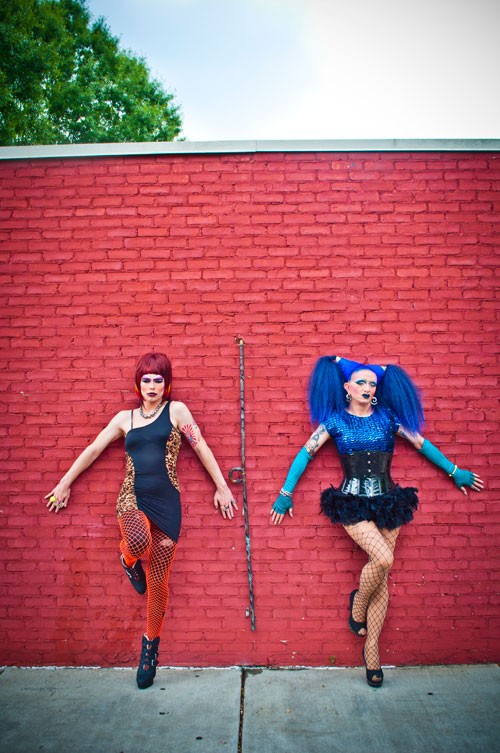 On a Sunday afternoon in April, two drag queens in ripped fishnets and high heels walk into a local Dunkin' Donuts. Lilith DeVille, 28, and BethAnn Phetamine, 24, order a dozen powdered, chocolate and raspberry jelly-filled treats. The teenage cashier is unfazed, but a mom shields her daughter's wide-eyed stare at Phetamine's tight leopard dress. The black feathers of DeVille's skirt rustle as she walks by each table.

Once the two sit down, a food fight breaks out. Phetamine stuffs a donut into DeVille's mouth, making her writhe like a snake that's swallowed too much rat. Her full blue lips are caked in confectioner's sugar, and she smiles.

The pair have come to this particular Dunkin' Donuts, at 1831 South Blvd., for more than dessert. For 30 years, this building belonged to Oleen's, the most famous drag club and the first gay club in Charlotte. It was one of the few establishments where men who dressed in women's clothing could feel comfortable, could feel like themselves, in a city known more for its Bible-thumping preachers than its mavens of the counterculture.

THE FOREMOTHERS OF DRAG in Charlotte charged out of the darkness and into the light in the '60s, when society considered men in heels — if it considered them at all — as cross-dressing prostitutes. Legendary queens, like Boom Boom La'Tour, who has performed locally for 46 years, fought to avoid police harassment as hard as they fought to be taken seriously as performers. In the early days, cross-dressing could land a drag queen in jail for six months on prostitution charges. But that hardly stopped them.

La'Tour remembers her first drag show well. It was Halloween night, 1969, and Oleen's was packed. La'Tour, a high school senior, was anxiously waiting to perform. Among the gay-friendly onlookers were also lawyers, police and the sheriff. La'Tour's heart was pounding. Her performance could have landed her in jail, but desire trumped caution.

Don Robertson and Oleen Love had opened the club that same year. The venue, where the bar and stage shared one room, had shoddy sound and lighting. But queens were guaranteed the freedom, at least from patrons, to be themselves.

La'Tour eventually became one of the club's most celebrated acts. "I wasn't going to make it to Hollywood," she says. "Oleen's was the closest I got."

In the earliest days, performers had to wear at least one article of men's clothing, usually underwear, to avoid being considered a prostitute, says Greg Brafford, Oleen's manager from 1984 to 2000, when it closed, and owner of the gay bar Woodshed. Arrests and police harassment were everyday problems, so drag queens had to learn how to protect themselves.

"They were men in dresses, and they were fighting," Brafford says. "They would take off their high heels and tear somebody's head in a heartbeat."

The disco era changed Charlotte's perception of drag queens. Police began to see them as entertainers, not street walkers. La'Tour remembers when they first appeared in the Charlotte Observer and on local news channels.

The campiness of drag performances made them palatable for a larger, sometimes less accepting, audience, says Kent Brintnall, who teaches religion and women and gender studies at UNC Charlotte. It's why all kinds continue to enjoy drag performances.

"They're the least threatening representation of gay culture," Brintnall says. "They fit an expectation of gay men being over the top and effeminate. In some ways, drag queens can be analogized to gay male minstrel — gay-man black face."

Much like black face in the 19th century, drag today is as much entertainment as it is a symptom of an underlying issue.

"There's an internal audience for camp critique and the external audience that thinks of it as very funny," Brintnall says. "But there's a more biting thing going on. [Camp] is a way of rendering a kind of anger and critique very safely." 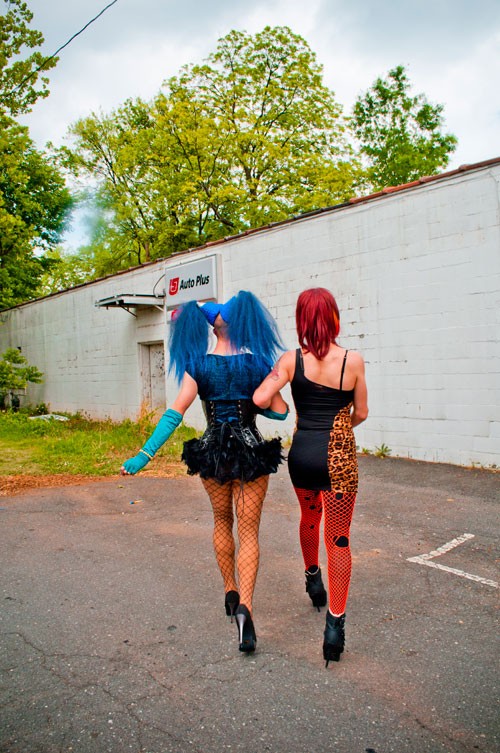 DEVILLE NEVER FELT the need to conform while growing up in the small South Carolina town of Lancaster. In high school, she was known as A.J. Barker, but thanks to inspiration from Disney villains and John Waters films, she became divine, wearing clothes Lancaster didn't often see. Her velvet cape trailed behind her in the halls. She would clutch her purse — a replica of a coffin — on her way to math class.

"I was your textbook, late-1990s, Hot Topic Goth kid," she says. "I looked like I crawled out of the crypt. I was the epitome of that. And I didn't care."

Young A.J. Barker was confident, but students still found reasons — sometimes less obvious than the clothes — to tease the boy. After all, he also was raised in an Orthodox Jewish household.

BethAnn Phetamine grew up as Justin Crego, a shy kid who would watch the famous 1995 drag movie To Woo Foo, Thanks for Everything, Julie Newmar and fantasize about living the lives of its characters. He was raised Southern Baptist and attended church with his family every Sunday, but Justin always knew he was different. After he met A.J. in middle school, Justin developed the courage to become the wild, outspoken BethAnn Phetamine.

"I've always looked up to [A.J.] and admired him because he was openly gay, and he was the freak of this small little redneck school," Phetamine says.

For some queens, the outfits and attitudes are less about an act than they are about self-transformation. Transgendered male queens use drag to express who they really feel like inside — women.

Jamie Monroe, 1987's Miss Gay North Carolina America, performed in women's clothes before she decided to live her everyday life as a woman. Audiences and the drag community at the time viewed her with confusion, even derision. That's when Monroe stepped away from the limelight to better understand herself as more than just a performer.

"It seemed to be hard for transgendered girls back then," Monroe said of her high performance years in the 1980s and 1990s. "Now, I'm really comfortable in my own skin."

ON A RECENT FRIDAY, Jessica Jewel Addams scoots the slice of apple pie she ordered aside and leans in to describe how she stuffs her bra to make her boobs look bigger. Then, she reveals the proper way to "tuck" her penis under her body with masking tape. But she's less willing to discuss something more personal, more private: her family.

Born Jesse Ellis Shaw, Addams was raised a Southern Baptist in Southport, where her father wore cowboy boots and had a gun rack in his pickup truck. Jesse didn't think to emulate the gait and mannerisms of a boy until his older sister told him he acted like a girl.

"I grew up unisexual in mindset," Addams says. "I didn't really bother thinking if I was a boy or a girl. I was just Jesse."

When Jesse was 16, his 3-year-old nephew was playing with the guns in his father's truck when he accidentally pulled the trigger. Jesse's dad, who stood nearby, was shot and killed.

Addams changes the subject, as if she's trying to distract herself from going too deep into the memory. She pulls out her phone and smiles at pictures of herself in the afro wig she wore one Halloween. For Addams, dressing up as a beautiful woman has, in a way, become a way for her to escape the ugliness of life.

It's also been a way to express who she really is. Whether working as a cashier at Food Lion, her day job, or doing a drag show, Addams pads her bra to give the appearance of breasts until she can afford to get the real thing. (She has been saving up for her implant surgery.) She does her makeup every morning and no longer wears men's clothes. After her 25th birthday on July 21, Addams will start a regimen of female hormones.

Addams is not sure if she'll make it as a transgendered queen in Charlotte, although the path to fame is less rocky thanks to transgender queens like Monroe, the Miss Gay North Carolina who struggled for acceptance. But Addams' desires are simpler than performing on a stage. She hopes that people on the street, or at a neighborhood donut shop, will one day say hello instead of gawk. People may see her as different, but Addams says she's always felt most comfortable in her skin as a woman.

"I see myself as anybody else." 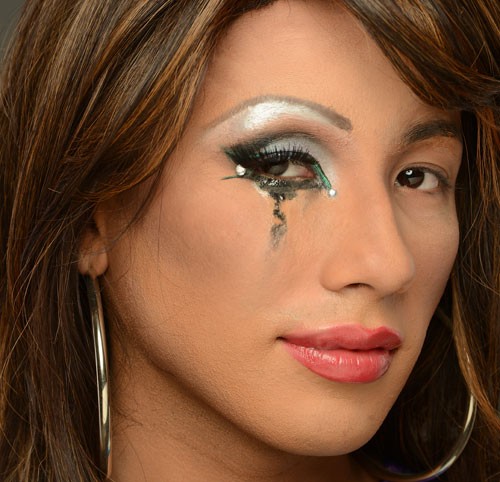 Angela Lopez first entered the U.S. aboard a bomber plane — a dramatic grand entrance to her new country. Today, she would expect nothing less. That's because Lopez is one of a kind among Charlotte's drag culture.

Considered the only mainstream Latina drag performer in the Queen City, the Central American-born entertainer can samba, meringue and cha-cha past all her peers. While Lopez has fought to perform in mainstream gay clubs, her Latina queen counterparts are content to work in Spanish-speaking establishments only.

"It's like a great divide," she says. "They go over there to do their shows, and we stay over here to do ours."

Lopez's dark eyes and radiant smile conceal a rocky childhood. The 31-year-old was born Carlos Capps in Panama. In 1989, the half-Panamanian, half-Cuban Lopez and her family were evacuated when the U.S. invaded Panama to arrest the country's head of state, Manuel Antonio Noriega, on drug-smuggling charges. That first in-flight trip aboard a bomber plane landed Lopez in the States, where she lived in Florida, Washington state and North Carolina. She returned to Panama from 1992 to 1996, but came back to North Carolina and settled in Sanford.

Lopez came out her freshman year of high school and started taking jazz dance classes. The intense teasing — Lopez was the only boy in her class — made her quit dance. She considers herself a butterfly, one that flew from flower to flower in search of a social home: "I wasn't Latino enough to hang out with the Latinos."

Luckily, her school's theater group became a haven. After graduating in 1999, Lopez moved with her boyfriend to Charlotte and entered her first drag talent show. Although she never intended to be a drag queen, her love of theater spurred her on.

Unlike most drag performers in Charlotte, Lopez never had a drag mother, or mentor, because she wanted total control of her career. She performed once at Oleen's, the first drag club in Charlotte, before it closed in 2000. The bar doesn't hold the same nostalgia for Lopez as it does for its founding queens, although she understands its historical importance and appeal among the city's drag community. "You don't get that feeling anymore," she says of current gay clubs and bars in Charlotte. "You don't get the intimacy that you would get at Oleen's."

A spirit of togetherness is also missing among her fellow Latina queens. Most of them only perform at the Latin club Skandalo's on Independence Boulevard and avoid English-speaking clubs because of the language barrier. Although Lopez is bilingual, most Latina queens in Charlotte speak Spanish only, she says.

Still with the same boyfriend, Lopez wants to eventually carve out a stable performance schedule for herself so she can raise a family. For now, she will compete in the Miss Gay N.C. America Pageant, held in August at The Scorpio, a Charlotte gay club since 1968. If Lopez goes on to the next round, she will enter nationals in October. She has been the first alternate in the national competition two times in a row.