Yes, You Can be Grateful on Thanksgiving 2017

"Just wait till you have bills to pay and a family to support!" my dad would shout over his turkey and dressing during the Thanksgiving dinners of my youth.

Dad, a forty-something fiscal conservative, and I, a twenty-something leftist English major, would spend entire Thanksgiving holidays arguing about Reaganomics, the Iran-Contra scandal and welfare. My mom, a traditional Southern Democrat, would wince.

The arguments often got heated. "You're a slave to the corporate ogre," I'd proclaim, dramatically. "You're a naïve, idealistic college student," he'd retort, dismissively.

Thanksgiving dinners were volatile and uncomfortable as my dad and I bloviated, staking our painfully obvious positions, and making potentially precious moments together miserable for everybody else in our family.

Just over two decades later, my dad and I took a road trip together across the South. By then, I was in recovery from addiction and he had volunteered to accompany me while I did the research and reporting for a book I was writing on southern music, history and politics. Dad attended 12-step meetings with me along the way, and would read my recovery literature and talk with me about it. 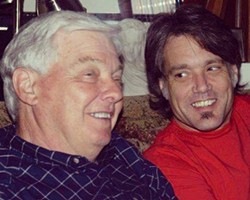 By then, my Republican father and I had come full circle. Politically, we both vigorously opposed then-president George W. Bush. Alarmed by Bush's saber-rattling and his party's cruel positions on same-sex marriage and other social issues, Dad was moving to the left. And I had become more willing to listen to his ideas about the economy.

The two of us realized on that trip that we were never really as ideologically split as each of us made out. During those earlier Thanksgivings, he had exaggerated his conservatism and I had pumped up my leftist views; the more Marxist I became, the more reactionary his retorts, and so on and so forth.

I've had the privilege of spending time with my dad during his most vulnerable moments, just as he had spent time with me during mine. Those old arguments over Thanksgiving dinners about Reaganomics and the Iran-Contra affair seem petty today.

My dad and I are fortunate in this regard. Not all family stories end up like ours. A recent NPR poll found that 58 percent of Americans are dreading Thanksgiving this year. They're afraid of political discussions. The country is more divided now than it has been in decades. Family members on different sides of political lines are less likely to try and understand each other's positions. Even the president of the United States urges us to hate each other.

Sometimes, we have to seek out different families — non-biological family members who understand us and are willing to provide mutual moral and emotional support.

And that's what this special Thanksgiving issue is all about.

I have friends in my 12-step program whose family members refuse to understand their plight. Fortunately, there are places for them to go and people to be with on Thanksgiving who do understand. I have LGBTQ friends whose families have shunned them. There are places where they, too, can go and be with people who care.

Some of my friends have great families, but would rather spend their Thanksgiving helping folks who live on the street and don't have families to spend time with. There are places and organizations that can use those friends' help, too.

And then there are those whose circles of friends in music and the arts are the best families they could ask for.

In this week's special Thanksgiving issue, we offer several options for Charlotteans who choose to spend their Turkey Days with alternative families. One of our favorite alternative families is the one that gathers at Common Market in Plaza Midwood pretty much every day. This year, Common Market's owner, Blake Barnes, is reviving an old Turkey Day tradition. On Thanksgiving, he and his crew will be serving up breakfast sandwiches, soup and good vibes to a neighborhood known for serving up good vibes during the other 364 days of the year.

Thanksgiving at Common Market is one of Barnes' favorite days. "I get to see a lot of people who used to live here come back in town," he says. "It's become quite a tradition."

Me? I'll be with Dad. We won't be talking politics. We'll be watching football together and reminiscing about that trip across the South that helped us appreciate each other all over again after too many years of strife.