Writing For a Song 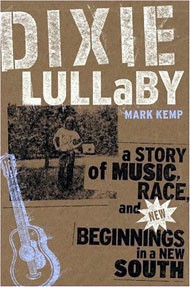 Kemp on Southern music roots
Asheboro, North Carolina, native Mark Kemp has written about music for a long time. Currently the entertainment editor at the Charlotte Observer, he has also logged time at Option, Spin, and Rolling Stone. He's lived all over the country, and interviewed more so-called "famous" musicians than anyone since Byron Allen.

However, Dixie Lullaby: A Story of Music, Race, and Beginnings in a New South (Free Press, 296 pgs., $26.00) shows that the writer has no doubts about where home lies. Like many Southerners of his generation, he grew up listening to a burgeoning young genre called Southern rock -- equal parts country, gospel, Brit influence, and soul and R&B. Ten years later, Southern rock had become a joke to many -- redneck music, in so many words -- despite its rather open-minded influences. People happened upon the Confederate flag caps of some of the music's listenership, ignoring the music's profound influence on jam bands (Widespread Panic), rock bands (R.E.M, Drive-By Truckers) and metal acts (Guns "N' Roses, Metallica). For Kemp and others like him (including myself) the music was something else -- an exciting avenue into a new South, where genres were blending as quickly as its people.

Kemp's impressive book rides an autobiographical narrative thread, but his story ought to resonate nicely with anyone who has ever felt like more than a sum of their (pickup truck) parts. --Timothy C. Davis

As Neil Strauss writes in the introduction to Lit Riffs ("Writers cover the songs they love," MTV/Pocket Books, 420 pgs, $13.95), one of the many great things about the medium of music is that it "occupies only the ears, leaving the imagination free to wander (unlike films or the Internet)." Which helps explain why music -- despite being notoriously difficult to describe -- is so much fun to write about, as this collection suggests. Captured between the pages of this book are short stories from 24 writers written around the theme of -- or inspired by -- particular songs. For instance, National Book Critics Circle Award winner Jonathan Lethem (Motherless Brooklyn, Fortress of Solitude) uses Yo La Tengo's version of Daniel Johnston's "Speeding Motorcycle" as the catalyst for his narrator's nostalgic look back after the end of an illicit affair. Tom Perrotta, author of Election, cites Tom Petty's youthful anthem "I Won't Back Down" -- and Johnny Cash's world-weary version of it -- as the inspiration behind his story of teenagers forced to learn life-long lessons about the strength -- and costs -- of staying true to one's ideals. Juliana Baggott (Girl Talk, The Madam) chronicles the life of a promiscuous, passionate Jersey girl whose men are markers of her fading youth -- the story takes as its source the "Crazy Janey" of Bruce Springsteen's ode to drunken youth, "Spirit in the Night." Other writers include the late Lester Bangs (Rod Stewart's "Maggie May"), Amanda Davis (the Cowboy Junkies' "Blue Guitar"), Heidi Julavits (the Velvet Underground's "I Found a Reason," via Cat Power's cover), Judy Budnitz (Tom Waits' "Way Down in the Hole"), and Arthur Bradford (AC/DC's "Highway to Hell"). Good, bad or indifferent, the stories exemplify the power songs can conjure.-- John Schacht

Cash at Folsom
"Folsom was ... a social statement on behalf of disenfranchised peoples," writes Michael Streissguth at the opening of his introduction to Johnny Cash at Folsom Prison: The Making of a Masterpiece (Da Capo Press, 185 pgs., $24). It was, the author contends, "as potent as any such statement in the roiling 60s."

Streissguth cites the 1968 record Johnny Cash at Folsom Prison as one of the most important of that turbulent era in his extensively researched and illustrated book chronicling Cash's visit to the infamous California prison. He even declares that by performing in front of "America's modern-day lepers" and releasing it on record, Cash "unapologetically told his listeners that these locked-away men deserved the compassion, if not the liberation, that the 1960s offered." It was, the author declares, a brazen act that none of Cash's peers -- Dylan, Zappa, the Beatles, and Crosby, Stills, Nash and/or Young -- could match with their own supposedly revolutionary music.

As the book also makes clear, it was an event that revived Cash's career in the late 60s by bringing the Man In Black's music to a whole new -- and at the time, unlikely -- audience: Hippies. In meticulous detail, Streissguth chronicles the events leading up to the day and moment that Cash and wife June entered the maximum-security facility. You see the show's effects and see the aftermath of the record's success and impact. And the author pulls it off without ever losing even the most casual reader's attention. --John Schacht