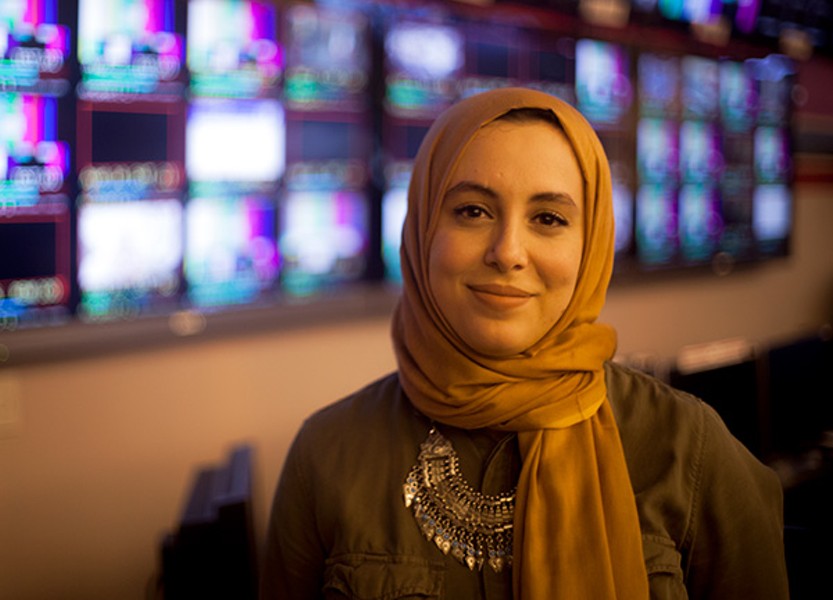 Last year, CL contributor Lara Americo debuted her photo series "Trans & Queer in the Workplace" in Creative Loafing between August and December. The series was eventually picked up by Huffington Post and served as the basis for Americo's Chrysalis exhibit at C3 Lab. This year, Americo has decided to highlight another marginalized and misunderstood population, the local Muslim population. Every other week, we will be running a photo and some insights from another Muslim Charlottean, as they discuss their work, personal lives and the judgement they often live with.

Rand Zafer is an associate news producer at NBC News in Charlotte who's deeply connected to her Muslim community in Charlotte. Her experiences in the newsroom and in her work shape how she sees the world and interacts with the people in it.

Muslim in Charlotte: Rand Zafer from Creative Loafing on Vimeo.

"Working at a news channel has been mostly great. However, I've had my share of struggles, especially when stories are about Muslims or especially when you have these stories about attacks, specifically terrorist attacks, because automatically Muslims become linked to those attacks because they have been carried out by people who've hijacked the religion.

"When we're covering those types of stories, it does get a little bit mentally and emotionally difficult for me. So many words get thrown around. Islam. Muslim. Even hijab. Just anything that relates to the religion gets linked to terrorism. So it does get difficult for me.

"But sometimes I have to separate my emotions from my job and recollect myself. My colleagues have been very, very supportive. They come to me after work or whenever they have a break and show me their support. They tell me that a lot of the stories do get misrepresented on TV because you have people who aren't very qualified telling these stories because they're not Muslim, they didn't live in the Middle East, they don't have the proper knowledge. Sometimes the stories are delivered incorrectly and the entire religion gets misrepresented.

"Another thing I really appreciate about working here is people are very open-minded. Whenever they have questions about Muslims and Islam, they come to me and ask me. That changes the way they tell their stories. They're very cautious about how they deliver any message that pertains to the Muslim community."