Usually I'd kick things off with a reader-submitted question, but this week is different. Park Terrace Theater is getting ready to unearth a time capsule buried there on May 11, 1964 that contains, among other things, a letter from the then-mayor to Charlotte's current mayor. In this week's QQC I take a look at what was happening in Charlotte and the world around that time. 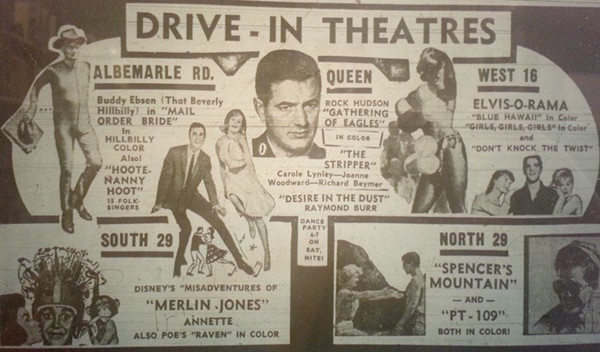 At home, most Charlotteans were likely gathered around black and white TVs watching programs on Channel 3 (WBTV) and Channel 9 (WSOC) like Mister Ed, The Dick Van Dyke Show and Petticoat Junction.

Less than a year after the assassination of President John F. Kennedy, Lyndon Johnson was at the helm. The world was embroiled in the Vietnam War. Schools in Charlotte were still racially segregated, and talk of integration had some white families worried and many black families enthusiastic about improved opportunities for their children. Headlines in the Charlotte Observer proclaimed things like, "Happy, Useful Life Possible For Most Mentally Retarded" and a "Communist Plot On [then-Secretary of Defense Robert] McNamara's Life Uncovered." Charlotteans were receiving the final round of a three-part injection series designed to eradicate polio, and a local gas war had knocked the normally pricey 30 cents a gallon to the bargain basement price of 15 cents.

At Elmwood Cemetery, a group of women known as the United Daughters of the Confederacy gathered to memorialize soldiers that had died in the Civil War 100 years earlier, while railroad employees were planning a strike. A daily report of Charlotte criminal activity indicated the following: eight assaults with deadly weapons, five store break-ins, two assaults, two house break-ins and three automobile thefts. (In light of recent questions surrounding government corruption, it's interesting to note that the Charlotte-Mecklenburg Police Department was under scrutiny for supposed mismanagement and gasoline theft.)

The opening of the Park Terrace that month was a cause for major excitement. The mid-century modern building was a nice compliment to the already established Park Road Shopping Center, which had opened eight years earlier. Announcements of the event were mailed out citywide, touting the many luxury features of the theater, such as rocking chair seating, and the line-up of events scheduled for the highly anticipated evening. Beginning at 8 p.m there was a fireworks display, followed by Doris Morgan performing on the organ "Music In The Sky." A local dedication by city government officials (among them, then-Chamber of Commerce President John Belk) was topped off by the movie screening for the night: Captain Newman, M.D., starring Gregory Peck, Angie Dickinson and Tony Curtis. It was also noted on the program that the film was to be shown "in color."

The public is welcome to attend the unearthing of the capsule, 2 p.m. Sunday at Park Terrace Theater. Beginning at 3 there will be screenings of Mary Poppins, The Sound of Music (7 p.m.) and Dr. Strangelove (8:30 p.m.). You'll also have the chance to marvel at a presentation of vintage automobiles.