The most awkward sexual moment in my adult life took place in Disney World, right on Main Street, Magic Kingdom where I worked as a “cast-member” in the Walt Disney World College Program.

I took a semester at Virginia Tech to study abroad, in the happiest place on Earth. An internship for which I was merely assigned a job in merchandise retail while wearing a flannel hoop skirt with a shoulder-padded blouse and bow tie. 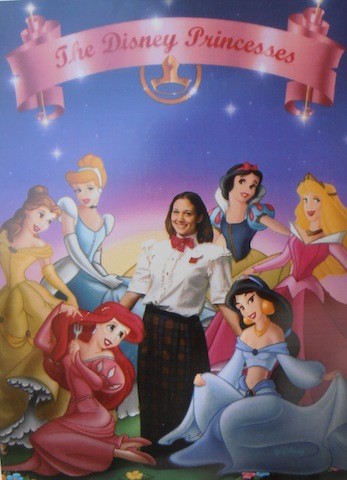 I worked in the very last store by the exit, where everyone came after the park closed to get their 8X10 photo of the family with Mickey Mouse.

One night, in between pondering why I’m getting college credit for operating a cash register ringing up over-priced souvenirs, I noticed a younger, kidless couple waiting in line. Every time I surveyed the line to assess when I could get the hell out of there, I noticed they were surveying me. Blatantly staring at me as though they were waiting for me to make eye contact. I surveyed them back, trying to figure out if I knew them from the College Program. Not registering their faces, I just proceeded to go about my cash register typing.

After catching them eye-raping me a few more times as they patiently waited in line, I felt kind of awkward when they reached the counter. They were both looking at me seductively while holding hands and nibbling each other’s ears as they whispered stuff back and forth. Only having a minute or so at the counter they got straight to the point.

“Hey Brittney (I was wearing a nametag) … you’re cute,” the girl said to me, as though I was a man.

I found it odd and uncomfortable that a woman just complimented me flirtatiously, in front of her boyfriend nonetheless.

“Uh, thanks. Do you guys have your photo number?” I asked so I could go get their picture.

Then the guy chimed in. “We really just wanted to come talk to you.”

I could only respond with a facial expression of confusion.

"We want to hang out with you. What are you doing tonight?” the girl confirmed.

Not having any plans and always looking to make new friends, I just mindlessly blurted that out, “Nothing! Probably won’t get home till midnight. Don’t think I’m going to party tonight though.”

“Well, we’re on vacation and we were looking for someone to party and swing with,” she responded.

“Like swing dancing? There’s a place on Disney’s Boardwalk that has all kinds of ballroom dancing.”

They both chuckled at my naivety as I nonchalantly rang them up for their souvenir photo. But I still didn’t get it.

"No, we like want to HANG OUT with you,” she reiterated, emphasizing the "hang out" to imply they’re not talking about sneaking in and playing beer pong at the Disney dorms.

The girl wrote her number on her receipt and handed it back to me. “Call me when you get off work,” she said, winking as she walked off.

As I walked through the Disney tunnel to change out of my Amish-looking outfit, I pulled the number with a foreign area code out of my pocket, wadded it up and tossed it into the trashcan. The whole idea of it freaked me out, and besides, I had a boyfriend at the time and I don't think he was invited. But I walked through that underground smelly tunnel with my shoulder-pads back and head held high ... I looked like something off Little House in the Prairie, and I was still sexy enough to be invited to a threesome. I got off on that.