Dating and Mating Don't Do This

… That’s a line used all too frequently by guys as either a conversation starter, or worse, a pick-up line.

Like the guy who approached me at The Liberty the other night.

Guy: Miss Cason, I’m sorry to interrupt you, but I wanted to introduce myself. I’m like Tucker Max.

Apparently he doesn't have his own name.

There’s somewhat of a burden in being Tucker Max’s protégé. Not the fact that people always assume that we’re sleeping together — because we’re not — but I have to put up with guys who actually use that line … on me. As much as I love Tucker as an author and mentor, I want a guy who is his own person … and especially not my big brother-boss. 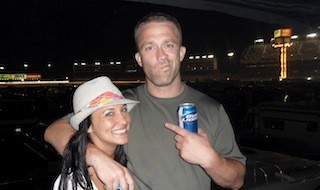 This is typically how the conversation goes:

Me: So you got an academic scholarship to Duke Law and went on to write two bestselling books?

Me: Soooo, you pretty much just get drunk, fall down, shit on yourself and others, and then sleep with a bunch of women?

Me: So, you’re just a douchebag?

Or worse … there’s the Tucker posers like this one …

This mail is sent via contact form on Brittney Cason http://brittneycason.com

I was at the Milwaukee Tucker Max book signing. I got to take my picture with you, which was almost as awesome as TM. I grabbed your ass, which you thought was funny once, but not twice lol. Sorry for pushing it, but I follow Mr. Max’s advice of living in a moment, and I doubt you actually remember this, a tons of guys hit on you every stop I’m sure. Well, just wanted to say hi, I’m a fan of yours now too! E-mail me back if you’d like haha

I showed this e-mail to Tucker …

His response: “I don’t tell people to sexually harass girls.”

Tucker’s philosophy may be to ask for forgiveness before permission … but that does not pertain to sex.

When the guy high-fived my ass in Milwaukee, I slapped his hand and pointed my finger in his face. “NO!”

And no, I wasn’t being funny — I treated him like he deserved to be treated … like a dog. Sadly, I’ve been in that situation quite a few times in the past. Do guys think they can sexually harass and objectify women at their own whim? You are not permitted to trespASS. You’re not even allowed to do that in a strip club when a girl is slapping you in the face with her bare breasts.

After I so kindly disregarded his disrespect to avoid the dramatics, he proceeded to grab my ass again.

Slap my ass once, shame on you — slap my ass twice, I’ll slap you.

Girls don’t want to be sexually harassed nor do they want a guy who pretends to be anything other than who he really is. Just like a man wants a woman who is beautiful under her make-up, a woman wants a man who has a personality under his ego and knows how to show respect.