Dating and Mating Don't Quote Me

No, no, I'm not saying men are dogs — just like them in the sense that they have to be trained. He's not like a puppy you have to house break because he knows how to hold his dick. And I'm sure he's not looking for a pissing contest (so don't give him one). But you do have to train him as to how he can treat you. 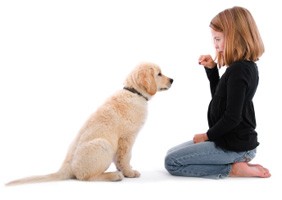 Let's say for example, if he's used to living alone, he may be a little particular about you being around all the time. You don't want to piss all over his place to mark your territory. But you need to lay down your ground rules of what you will and will not accept in terms of how he welcomes you in his life.

You can't change a person, but if a guy really wants to be your man best friend, he will obey by your demands for the respect you require for yourself. So train him to treat you the way you want to be treated. If he fails to oblige, let him off the leash and set his ass free.

Why is he a straying dog burying bones in someone else's yard? I hate to say it, but it could be because you let him get away with it. Granted, some men are just dogs. But most of them aren't, and they're looking for a loving home. Men need to be nurtured, like a puppy ... and fed like one, too.

Just like some dogs are difficult to tame, you can train a wild one to settle down. But you can't teach an old dog new tricks. Some guys just have bad role models for how to treat a woman ... it's not your fault, unless you put up with it.

Just like it's not my adult dog's fault he yanked his leash out of my grip and charged at another dog, only to end up getting bitten. It's my fault for letting him get away with everything when he was a puppy. He wasn't a bad dog, I was a bad owner. And I have comes to terms with the fact that my cheating ex-boyfriend wasn't the only bad one in our relationship. I let him get away with everything, leaving me with nothing ... except a big vet bill from my dog's surgery.