The historic Wilmore neighborhood made history on Saturday as the first neighborhood in Charlotte to plant an edible walkway at the intersection of Mint Street and Kingston Avenue. In a most excellent display of community, Wilmore residents, church members of Calvary United Methodist (the church that owns the property where the walkway is planted) and sustainably minded Charlotteans gathered together on a chilly Saturday morning to plant fruit and nut trees that will one day bear fruit for all of its residents to eat.

The idea stemmed from an observation made by Wilmore resident Kris Steele, who witnessed children walking up the street to get “food”, only to see them coming back from the convenience store with processed food items laden with salt, sugar and fat. Steele, who is also co-founder of Crown Town Compost, had a vision for something better and dreamed up the idea of an edible walkway. In Steele’s mind, an edible walkway would provide a sustainable source of fresh food, accessible to all.

“Imagine being able to just grab a piece of fruit from a tree,” says Steele. 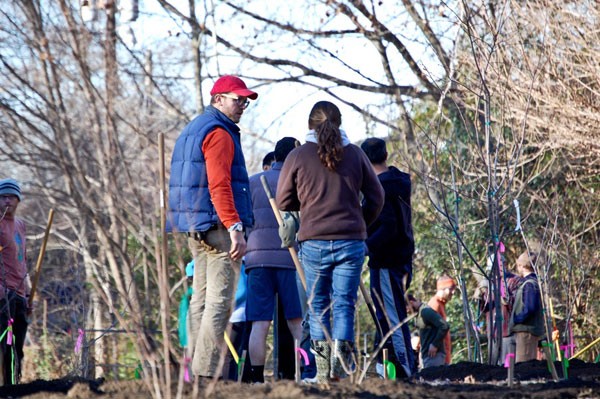 To make the idea a reality, Steele vied for resources from the community, which included a $2,500 beautification grant from Keep Charlotte Beautiful, a division of the City of Charlotte, and another $500 grant from nonprofit organization, Sustain Charlotte. Individual donors chipped in and several local businesses volunteered time, labor and materials to bring the walkway to fruition. Earth Farms donated compost and castings, Heartwood Tree Company donated labor and equipment and Full Wheel Farmers designed the walkway and has agreed to maintain the trees as they develop.

Volunteers planted apple, pear, fig, hazelnut and a variety of berry trees. Skip Johnson,59, a member at Calvary United Methodist Church for 35 years, has watched the neighborhood change considerably over the years. He believes the creation of an edible walkway is positive for everyone.

Nick Sisley, 34, a Wilmore resident since 2006, came to help out with his 3-year-old daughter Josie. Alongside them, folks from the contributing organizations loaned their time and talents to the project.

In a few years, residents will be able to reap the benefits of this project, an idea that started as a vision and became reality. Andrew Bowen, community research specialist at the City of Charlotte, believes Steele will continue to do good for Charlotte.

“He’s got huge visions for the entire city,” says Bowen. Judging by the recent launch of Crown Town Compost and the creation of Charlotte’s first edible walkway, we’d say Bowen is on to something.