The Yolk re-opens in Rock Hill

Last year, the Charlotte food scene was abuzz about a great new breakfast place in Rock Hill called The Yolk. Located in a dumpy strip mall, it boasted a homey atmosphere, intriguing specials and lines out the door every weekend. Say the word "pancakes" near me, and I'll tell you the best ones I've ever had were at the Yolk (and believe me, I've had my share of pancakes).

Owners Greg and Subrina Collier already had a relocation in the works when an electrical fire last August shorted out their plans. Finally, after months of insurance claims, construction and inspections, the Yolk has risen from the ashes, opening its new doors last Wednesday.

The restaurant's second home at 1912 Mt. Gallant Road is another shopping mall, only 50 years newer and in a better location. Ignore the old "Big Wok II" sign high on the façade and look for the small banner over the door announcing that breakfast is back in town. 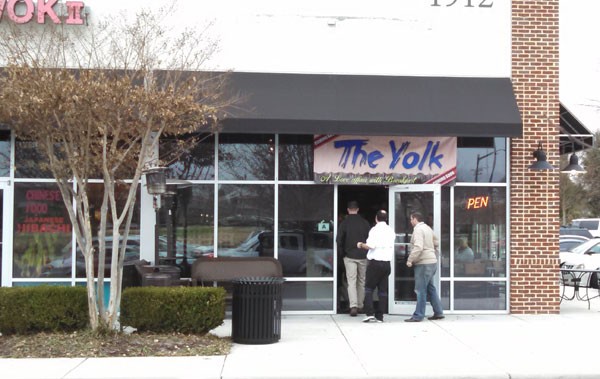 Much about the place remains the same. Subrina's vision of food-fostered fellowship re-sets the communal table down the middle of the long, narrow space. Grab any free seat, or put your name down if you'd rather be antisocial and sit in a booth. Most of the former wait staff have also returned to "TeamYolk," and will happily recommend their favorite dishes.

You'll find safe favorites on the menu, like omelets and those memorable buttermilk pancakes, but focus on the section titled Yolk Way or No Way. The names alone are worth the read — WWIII, Valley of the Sun — but the dishes themselves display Greg's passion for creativity. While consenting to include biscuits and gravy on the menu, he's bumped it up with brown butter biscuits, smoked chicken gravy and jalapeño ham. This food has "flavor" written all over it. 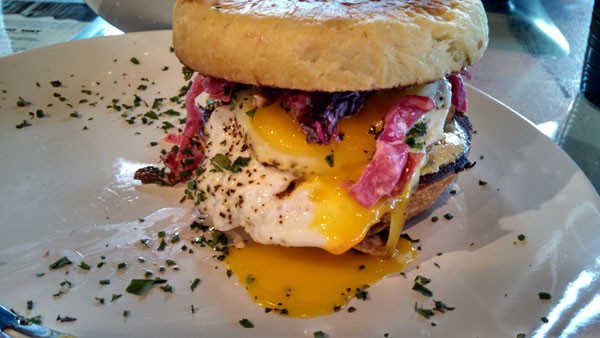 The same is true of the Sandwich & Wraps section. Sure, there's grilled cheese, but it comprises four varieties of melted dairy, including smoked gouda and fontina. The "Wich' Came First" is a handful of a sandwich built on a fried chicken croquette, a fried egg and remoulade sauce, then topped with a slaw of pickled veggies with a bite as bright as their pink color. It's an oozy, layered concoction that demands your attention.

Whether eating breakfast or lunch, order a side of the TN fries. Named for the Colliers' home state, the chunky potatoes arrive coated in Greg's proprietary blend of seasonings, including a subtle bit of sweetness. Don't ask for the recipe; you won't get it.

Local ingredients are not Greg's primary focus, but he does source all his eggs from Pennell Barn in York, and his bread from Breadsmith in Fort Mill. And while his N.C. fans are happy to make the short drive from Charlotte, he and Subrina dream of one day bringing the Yolk to our side of the state line.

There's no point in waiting for someday, though. Breakfast is, after all, the most delicious meal of the day.