A friend of mine once told me that you eat a dish twice: once with your eyes and again with your mouth. If that's the case, I can tell you that the Modern Duck a l'Orange at Lumiere (1039 Providence Road) proved delicious on both accounts. 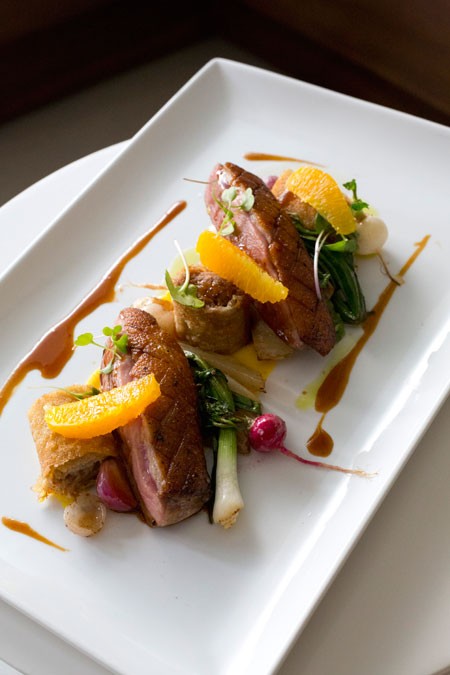 Since King Louis XIV was ballin' hard in the 17th century, duck a l'orange has had a place on the gilded plate. The dish has survived across centuries, continents and periods of saturated fanaticism. It remains, if done well, an icon in the realm of French cuisine. Traditionally, duck a l'orange is roasted duck flavored with oranges, usually accompanied by an orange- and liqueur-infused sauce. French folks love their sauces.

At Lumiere, chef Condron elevates the classic dish by preparing duck two ways, plated like an artwork on canvas. He begins with Moulard duck from the Hudson Valley, using both the breast and leg, treated separately. The breast is slow-poached tender and then pan-roasted to order, the crisp crosshatched skin concealing the duck's signature layer of flavorful fat and perfectly medium rare flesh beneath. The duck leg is prepared confit style, meaning cooked in its own fat, to a meltingly soft version of itself before it is enveloped in the French equivalent of phyllo dough, called Feuille de Brick. Condron prepares a classic sauce a l'orange with oranges, aromatics and Grand Marnier, careful not to turn it into something too cloying or jammy. Instead, the sauce maintains sophisticated depth and a bright essence of orange that cuts through the richness of the duck but does not overpower. The eye delights in color from tiny radishes, sliced orange wedges and roasted pearl onions and is further accompanied with fennel, slow-poached with fennel pollen and armagnac, a French brandy. Micro-basil and tarragon flit hither and thither and linear strokes of sauce frame the tasty work of art. If you want to experience French cuisine in Charlotte, this is your consummate plate.

Got a favorite dish in Charlotte? Share it with me at [email protected].