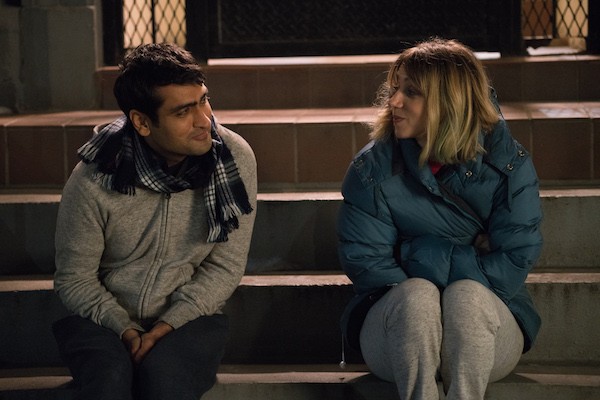 THE BIG SICK (2017). One of the sleeper hits of the summer movie season, The Big Sick finds its unlikely inspiration in the real-life relationship between Kumail Nanjiani and Emily Gordon. Nanjiani, perhaps best known for his role on TV’s Silicon Valley, basically plays himself while Zoe Kazan plays Emily Gordon (Emily Gardner in the film). He’s an aspiring stand-up comedian who’s perpetually having to contend with the attempts of his Pakistani parents (Anupam Kher and Zenobia Shroff) to rope him into an arranged marriage; she’s a college student who falls for him but then breaks it off when she realizes that he’s keeping her a secret from his family. So far, so expected — at least in terms of its comic beats and its romantic travails. But then Emily lands in the hospital, and the film veers off into unexpected directions as Kumail tries to deal with Emily’s misfortune while also attempting to ingratiate himself with her parents (Holly Hunter and Ray Romano). The script by Nanjiani and Gordon is generously laced with wit and wisdom, although the culture-clash interludes generally work better than the material centered around the comedy club. The acting is impeccable, with Hunter and Romano the cast standouts as Emily’s stressed parents.

Blu-ray extras include audio commentary by Nanjiani, Gordon, director Michael Showalter and producer Barry Mendel; a making-of featurette; deleted scenes; and a piece in which Nanjiani and Gordon discuss the real story behind the reel story. 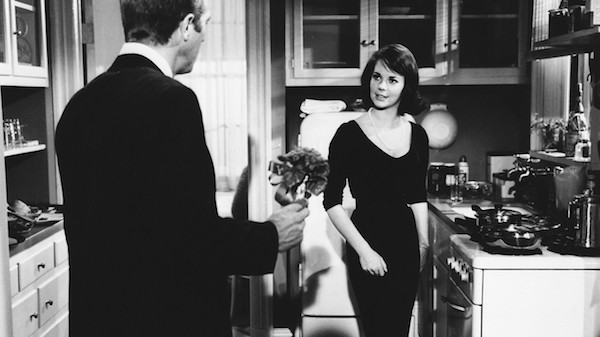 LOVE WITH THE PROPER STRANGER (1963). Although the motion picture rating system wasn’t overhauled until the end of the 1960s, it’s interesting to note that a bending of the rigid rules already began permeating the Hollywood films released earlier in the decade. Movies such as The Pawnbroker, Lolita and Who’s Afraid of Virginia Woolf? tested the cinematic boundaries, and while Love with the Proper Stranger didn’t venture quite as far, it nevertheless lunged in the proper direction. Natalie Wood stars as Angie Rossini, a New York shopgirl who informs Rocky Papasano (Steve McQueen), a struggling musician, that their one-night stand has left her pregnant. She plans to get an abortion, but since she comes from a deeply Catholic family, she can’t tell anyone except Rocky – for his part, he agrees to help pay for the then-illegal procedure. Directed by Robert Mulligan (To Kill a Mockingbird) from a script by Arnold Schulman, Love with the Proper Stranger is a bracingly mature film that tackles weighty issues in an intelligent and sober manner — at least until the home stretch, when it inexplicably turns into a frothy comedy and frustratingly ends on an abrupt and illogical note. The performances are all first-rate, including Herschel Bernardi as Angie’s concerned brother and Happy Days’ Tom Bosley as her bumbling suitor. A box office hit upon its original release, Love with the Proper Stranger managed to nab five Academy Award nominations, for Wood, Schulman, and the cinematography, sets, and costume design. 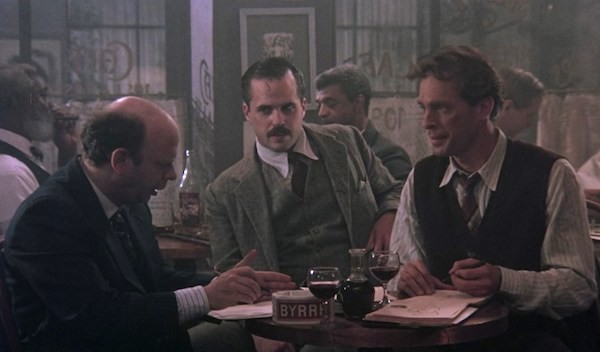 THE MODERNS (1988). A veteran filmmaker who’s never had a true breakout hit to call his own, director Alan Rudolph has pieced together a maddeningly inconsistent filmography that encompasses works both intelligent (Choose Me, The Secret Lives of Dentists) and idiotic (the Bruce Willis-Demi Moore thriller Mortal Thoughts, the Vonnegut bastardization Breakfast of Champions). Thankfully, The Moderns falls on the higher end of the scale – it’s clearly flawed but definitely worthwhile, and it almost serves as a test run for Rudolph’s other (and superior) film about intellectuals in the 1920s, 1994’s Mrs. Parker and the Vicious Circle. Here, the setting is 1920s Paris, as American expatriate Nick Hart (Rudolph regular Keith Carradine) divides his time between drawings caricatures to accompany the scribblings of a newspaper columnist (Wallace Shawn), creating forgeries at the behest of an art gallery owner (Genevieve Bujold) and a wealthy patron (Geraldine Chaplin), hanging out with the boozy Ernest Hemingway (Kevin J. O’Connor), and pining after his long-lost love (Linda Fiorentino), now married to a cold-blooded businessman (John Lone). Rudolph’s pictures are often a matter of style over substance, and that’s largely true here as well: While the script and the visuals start out on equal footing, the look of the film eventually outpaces the story, which grows exponentially silly. The performances are serviceable rather than scintillating, with Lone coming off best. 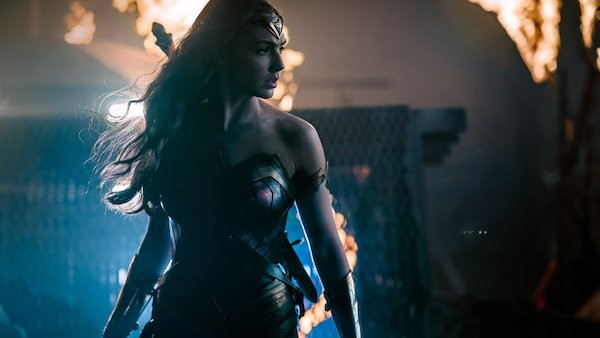 WONDER WOMAN (2017). Wonder Woman is the right movie at the right time – and for all the right reasons. Following the underwhelming trio of Suicide Squad, Batman v Superman: Dawn of Justice and especially Man of Steel, it’s the first movie in the DC Expanded Universe worthy of its box office riches. Following a rash of genre flicks that mistake nihilism for gravitas, it’s one of the few to unequivocally maintain that there’s still a place for uncompromised champions in our world. And following an eight-month (and counting) period which could be tagged Orange Is the New Bleak — during which a misogynistic Cretin-In-Chief and his army of racists, rapists, rednecks and reprobates continue to ratchet up the war on women — it proudly showcases a remarkable Gal who doesn’t suffer foolish men gladly. Just try grabbing her by the * ahem * and she’ll break your arm in three different places. In the grand scheme of all things cinematically superheroic, Wonder Woman takes its cue from the greatest of all such films. Like 1978’s Superman, this new movie views its central figure as someone to admire without reservation. As perfectly embodied by Gal Gadot, Princess Diana / Wonder Woman is compassionate and curious — a winning combination in any person. As American pilot Steve Trevor, Chris Pine is an engaging presence, playing off his co-star with a disarming mix of amusement and admiration. The final battle buckles under the weight of CGI overkill, but that’s about the only complaint that can be lobbed at an exciting and empowering film that stops the current trend of only DC’s competition producing marvelous entertainment.

Blu-ray extras include behind-the-scenes featurettes with director Patty Jenkins; a bonus scene; and a blooper reel. 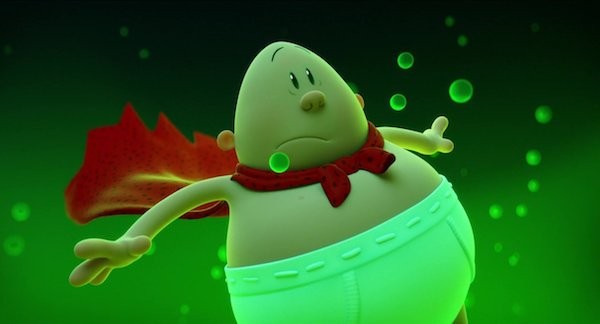 CAPTAIN UNDERPANTS: THE FIRST EPIC MOVIE (2017). Based on Dav Pilkey’s series of popular children’s books, this finds best friends George (voiced by Kevin Hart) and Harold (Thomas Middleditch) hypnotizing mean Principal Krupp (Ed Helms) into believing he’s Captain Underpants, a sweet-natured (if none-too-bright) superhero that the boys originally created in comic-book form. Once the dastardly Professor Poopypants (Nick Kroll) arrives on the scene with a master plan to eliminate laughter from the world, it becomes clear that Captain Underpants’ services will be required. With its bright gags and bright animation, this agreeable time-filler is at least preferable to another recent summer hit, the torturous Despicable Me 3.

Blu-ray extras include animated extras with various characters; lyric videos for “Weird Al” Yankovic’s theme song and Andy Grammer’s “A Friend Like You”; a Q&A session with the stars; and art galleries. 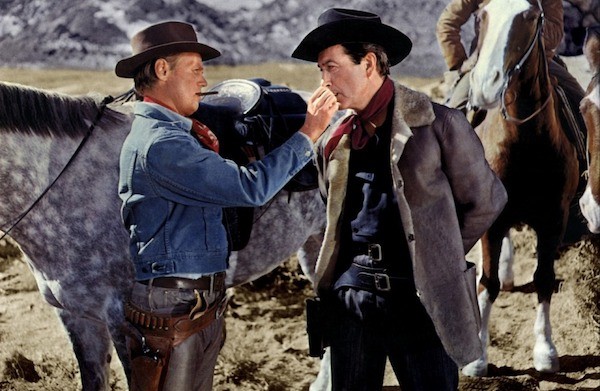 THE LAW AND JAKE WADE (1958). Here’s yet another solid effort from John Sturges, the underrated director best known for the one-two punch of The Great Escape and The Magnificent Seven. Robert Taylor plays both title characters: He’s Jake Wade but he’s also the law, a small-town sheriff who’s trying to put his criminal past behind him. But that proves to be extremely difficult when his former partner, the charming and perpetually grinning Clint Hollister (who else but Richard Widmark?), appears on the scene. With his gang (Robert Middleton, Henry Silva, Eddie Firestone and Star Trek’s Dr. McCoy, DeForest Kelley) backing him, Clint kidnaps Jake’s fiancée (Patricia Owens) and demands that Jake reveal the whereabouts of some buried loot. As is the case with most Westerns, the character dynamics are as important as the action set-pieces, and this one delivers on both counts. 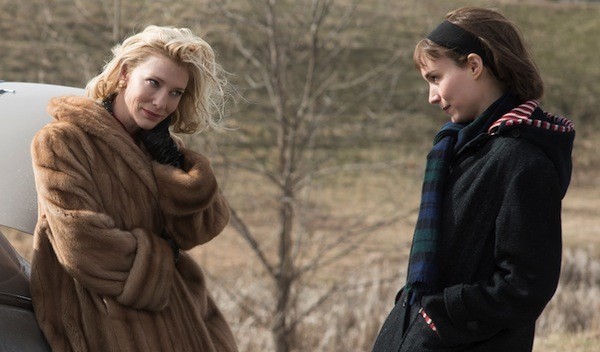 CAROL (2015). Todd Haynes’ exquisite adaptation of Patricia Highsmith's novel The Price of Salt proves to be a perfect bookend piece to the director’s 2002 Far from Heaven, merely one of the great motion pictures of the 2000s. This one also looks at the difficulties endured by idiosyncratic women in the 1950s, those who refused to allow societal taboos to throw a straightjacket on their independence or desires. Cate Blanchett plays the title character, a mother and recent divorcee who comes into contact with a department store clerk named Therese (Rooney Mara). The women are immediately attracted to each other, but they move cautiously, aware of the prejudiced and puritanical attitudes surrounding them. An affecting love story, Carol is blessed with a measured script by Phyllis Nagy, exquisite cinematography by Edward Lachman, a gorgeous score by Carter Burwell, Haynes' fine attention to period detail, and not one but two leading performances full of empathy, grace and aching tenderness. (Netflix Streaming)