The Age of Innocence, The Disaster Artist, I, Tonya among new home entertainment titles | View from the Couch | Creative Loafing Charlotte

The Age of Innocence, The Disaster Artist, I, Tonya among new home entertainment titles 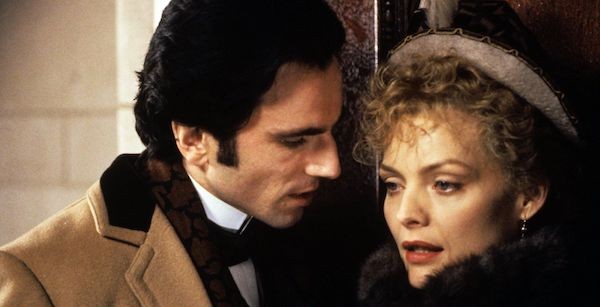 THE AGE OF INNOCENCE (1993). A raging bull in a china shop is the image many people had when they first heard that Martin Scorsese was tackling Edith Wharton's Pulitzer Prize-winning novel about love and deceit among the gentry of 1870s New York. But true film fans have always been aware that Scorsese has long been a passionate lover of such opulent period pieces as Luchino Visconti’s The Leopard and Stanley Kubrick’s Barry Lyndon, and here he channels that admiration into an exquisite and absorbing drama that's the cinematic equivalent of a good read. And, in a way, this love story about a man (Daniel Day-Lewis) enamored with a progressive woman (Michelle Pfeiffer) while courting her seemingly naïve cousin (Winona Ryder) still relies heavily on one of the director's most common themes: that of an individual who's unable to satisfactorily express his innermost longings and desires. Scorsese co-wrote the script with former film critic Jay Cocks, employing Joanne Woodward as the voice-over narrator who describes a conformist society that’s “balanced so precariously that its harmony could be shattered by a whisper.” The tech credits are impeccable, starting with Michael Ballhaus’s soaring camerawork, Dante Ferretti’s astonishing sets, and the gorgeous score by Elmer Bernstein (The Great Escape, To Kill a Mockingbird). An Academy Award winner for Best Costume Design (Gabriella Pescucci), this also earned nominations for Best Supporting Actress (Ryder), Adapted Screenplay, Original Score, and Art Direction-Set Decoration; absurdly ignored were Pfeiffer and Ballhaus (Day-Lewis at least earned a nod for the same year’s In the Name of the Father).

Blu-ray extras consist of a 1993 making-of featurette; new interviews with Scorsese, Cocks, Ferretti and Pescucci; and the theatrical trailer.

THE BREADWINNER (2017). Unlike the dismal box office hit The Boss Baby, here’s a toon flick that fully deserved its recent Oscar nomination for Best Animated Feature. An Irish-Canadian endeavor directed by Nora Twomey (The Secret of Kells) and co-produced by Angelina Jolie, The Breadwinner centers on Parvana, an 11-year-old girl struggling in Afghanistan under Taliban rule at the start of the 21st century. Living in this deeply misogynistic society alongside her loving parents, older sister and baby brother, Parvana finds her life greatly altered after a Taliban hothead has her father arrested for nonsensical reasons. Realizing that the family won’t survive without a male member to conduct business in public, Parvana decides to cut her hair, adopt the name Aatish, and pass herself off as a boy. Her newfound freedom excites her, but most of her time is still spent devising ways to spring her father from prison. Adapted from the novel by Deborah Ellis (with the author sharing scripting duties with Anita Doron), The Breadwinner is frequently startling in its honesty and brutality — heinous Taliban members pull no punches when striking women, and neither does this movie in showcasing the daily horrors that occur under this regime. The interludes in which Parvana spins a fanciful tale for her little brother initially distract from the more compelling mainframe but ultimately reveal themselves to be part of the whole.

Blu-ray extras include audio commentary by Twomey and key crew personnel; an introduction by Twomey and Jolie; a behind-the-scenes piece; and the theatrical trailer. 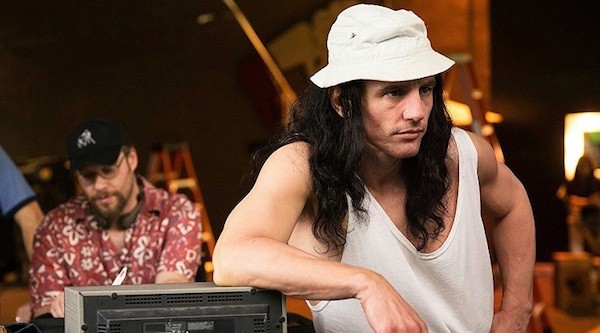 THE DISASTER ARTIST (2017). The spiritual companion piece to director Tim Burton’s Ed Wood, director-star James Franco’s The Disaster Artist is another cheerful Hollywood-insider piece about a man whose ambitions far outweigh his expertise. In this case, it’s Tommy Wiseau, the mysterious figure who in 2003 served as writer-director-producer-star-financier of The Room. A shockingly inept film co-starring Greg Sestero, The Room was barely seen upon its original release but has since emerged as a cult sensation. It even inspired a tell-all book by Sestero, and it’s that tome that functioned as the primary source for this endlessly entertaining film. Scripted by Scott Neustadter and Michael H. Weber (who earned an Oscar nomination for their efforts), The Disaster Artist initially traces the growing friendship between Wiseau (James Franco) and Sestero (Dave Franco) before focusing on Wiseau’s uproarious efforts to make The Room alongside incredulous cast and crew members (Seth Rogen adds some nicely modulated deadpan humor as script supervisor Sandy Schklair). Yet even amidst all the hilarity, there’s a subtle poignancy at work, as Franco (as director) and his scripters clearly admire Wiseau’s sincerity while also taking note of his insecurity. This is especially hammered home in an early sequence set in an acting class — condescendingly told that his unconventional looks and irregular cadence will only allow him to play monsters and villains, Wiseau responds by informing the gathered assemblage that they’re the villains because of how they’re treating him. It’s a sobering moment, and Franco, delivering a career-best performance, sells it beautifully.

Blu-ray extras include audio commentary by the Francos, Neustadter, Weber, Wiseau and Sistero; a making-of featurette; a piece on Wiseau; a gag reel; and the theatrical trailer. 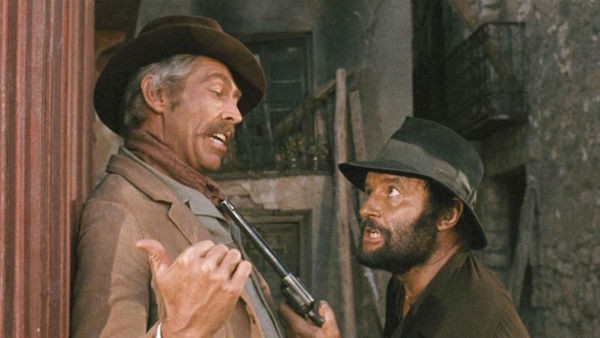 A FISTFUL OF DYNAMITE (1971). Italian director Sergio Leone turned Clint Eastwood into a superstar with his "Man with No Name" trilogy and also significantly boosted Charles Bronson’s leading-man status with the Western masterpiece Once Upon a Time in the West. Neither tough guy is on hand for this rowdy epic set against the backdrop of the Mexican Revolution, but you do get Rod Steiger as a Mexican bandit (a suitably hammy turn, even if his accent often slips into the Southern twang he employed in In the Heat of the Night) and James Coburn as the Irish explosives expert who awakens the self-centered bandido's anarchic spirit and sense of national pride. As with most Leone works, A Fistful of Dynamite (which also made the rounds under the monikers Duck, You Sucker and Once Upon a Time ... the Revolution) is full of sly humor and startling camerawork, and it also finds the legendary Ennio Morricone contributing one of his most offbeat scores. This would prove to not only be Leone’s final Western but also his penultimate feature film – he would later helm the 1984 gangster yarn Once Upon a Time in America before calling it a career.

A Fistful of Dynamite was released in the U.S. on two separate occasions in 1972, with running times of 120 minutes and 138 minutes. Fortunately, it’s Leone’s original 157-minute cut that has been making the most recent rounds on Blu-ray and DVD, and this new edition from Kino is no exception. Extras include audio commentary by filmmaker Alex Cox (Straight to Hell, Repo Man); separate audio commentary by film historian and Leone scholar Sir Christopher Frayling; a discussion of Leone by Frayling; a remembrance by co-scripter Sergio Donati; a piece on the film’s restoration; and trailers for all five Leone Westerns.

I, TONYA (2017). While the Theatre of the Absurd was a term given to a specific type of play, it can easily be used to describe such real-life incidents as the Tonya Harding-Nancy Kerrigan tabloid fodder tale of 1994, a real-life story so ridiculous in its details and its characterizations that it almost seems like fiction created for the stage. I, Tonya, therefore, adopts the right tone to relate the factual tale of the whacked kneecap, with director Craig Gillespie and writer Steven Rogers choosing to spin it in a darkly comedic direction. Even so, there remains real affection from the filmmakers for their central character, as Harding (Margot Robbie) is positioned as a figure of pity rather than a source of maliciousness. The movie posits her as an innocent in a manner in which real life may or may not agree, as Tonya is shown as a blameless victim in a life ruined by her strict mother (Allison Janney) and a career ruined by her scheming husband (Sebastian Shaw) and his dimwitted friend (Paul Walter Hauser). Robbie delivers an excellent performance as Tonya, allowing us to root for her against formidable opponents (including a skating community that caters to the rich and powerful at the expense of those lower on the economic ladder), while Janney is amusing in the rather one-note demands of her part. The music cues throughout the film (ZZ Top, Supertramp, and many more) are also tops. Janney earned an Academy Award for her supporting turn, with Robbie and film editor Tatiana S. Riegel nabbing additional nominations.

LITTLE SHOP OF HORRORS (1986). Little Shop of Horrors began as a 1960 Roger Corman cheapie (and subsequent cult classic) before being reinvented as an off-Broadway musical in 1982 by songwriters Alan Menken and Howard Ashman, the team that would soon be helping lead the Disney animation renaissance with their Oscar-winning work on The Little Mermaid and Beauty and the Beast. This 1986 movie is an adaptation of the stage hit, with ex-Muppet man Frank Oz taking the director's chair for this saga about lonely schnook Seymour Krelborn (Rick Moranis) and the dire consequences that arise after he finds a plant that thrives on human blood. The only off-Broadway cast member making the trip to the screen is Ellen Greene, and it's easy to see why: As the delicate Audrey, she shows off her formidable singing ability while also providing the piece with its warm center. Steve Martin is hilarious as the sadistic dentist Orin Scrivello, and there are cameo appearances by John Candy, James Belushi, Christopher Guest and, in the role that Jack Nicholson made famous in the 1960 original, Bill Murray as a dental patient who thrives on pain. Incidentally, the voice of the killer plant is provided by Levi Stubbs of The Four Tops. This earned two Oscar nominations, for Best Visual Effects (the animatronic work is excellent) and Best Original Song ("Mean Green Mother from Outer Space"). (Amazon Prime)