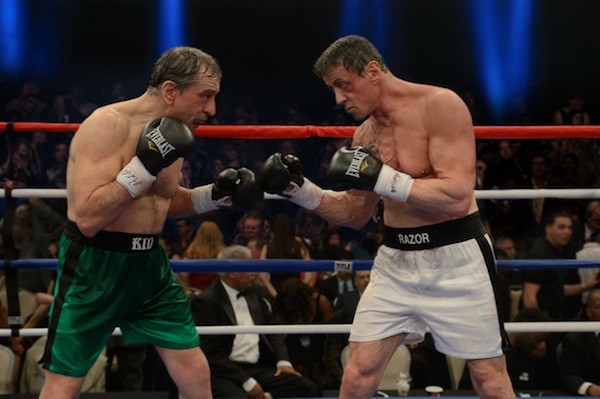 Muhammad Ali may have had the ability to float like a butterfly and sting like a bee, but Grudge Match can do no more than stumble around like a cockroach that's taken a direct hit from a can of Raid.

The pitch probably had Hollywood suits salivating, and, to be sure, it's a clever hook: Fashion a boxing picture in which Sylvester Stallone, whose Academy Award-winning Rocky made him an overnight star, and Robert De Niro, who won an Oscar for Raging Bull, play former pugilists who plan to get back into the ring 30 years after their previous two bouts left each boxer with one victory apiece. It's a sound premise for a breezy comedy, and Grudge Match gets off to a promising start as it draws on our memories of these actors in their prime and offers a bonus in Kevin Hart as the event's motor-mouthed promoter.

Unfortunately, scripters Tim Kelleher and Rodney Rothman were obviously laboring under the impression that this cotton candy confection needed some dramatic heft to it, so they added some buzz-killing subplots that drain away all the fun. Kim Basinger plays Sally, the woman who loved Henry "Razor" Sharp (Stallone) back in the day but made the mistake of sleeping with Billy "The Kid" McDonnen (De Niro). Jon Bernthal co-stars as B.J. (and you can bet there are a lot of feeble jokes centered around that moniker), the product of the fling between Sally and Kid. There's even a moppet (Camden Gray) — B.J.'s son — who (shades of Crazy Heart) is left to fend for himself while Grandpa Kid indulges in booze and babes at a bar.

These formulaic thrusts offer nothing new, and coupled with the fact that the winner of the bout is never in question, it looks like it will be up to wily vet Alan Arkin, as Razor's friend Lightning, to save this thing. But no, his character is just another in a long line of cinematic seniors with foul mouths, and with Nebraska's June Squibb raising the bar, Lightning's cracks about his favorite hooker (the things she could do with a ping pong ball!), his white pubic hairs and the health benefits of horse urine only further serve to make Grudge Match about as appealing as jock itch.