A bumpy Ride Along 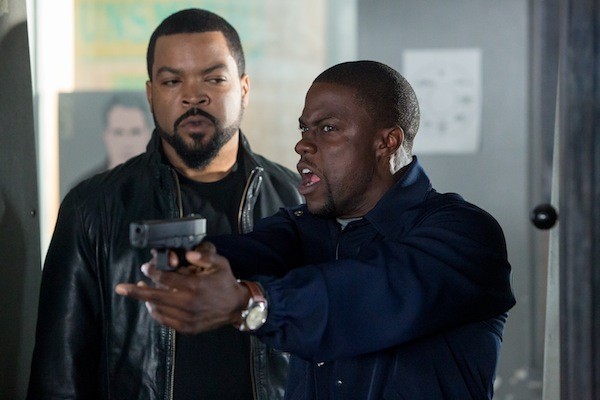 If you can't stand The Heat, then stay out of the multiplexes showing Ride Along.

Melissa McCarthy's vibrant performance opposite Sandra Bullock modestly elevated that 2013 summer hit out of its holding pattern as just another formulaic comedy involving mismatched cops. In this new picture, Kevin Hart similarly huffs and puffs and tries to bring the moviehouse down, but both he and co-star Ice Cube are defeated by drowsy direction and a screenplay that doesn't take enough advantage of their talents.

The movie's tagline is both clever and pushes the plot: "Propose to this cop's sister? Rookie mistake." (Give its creator a bonus ... or, better yet, a share of the profits.) Hart plays Ben Barber, a high school security guard who, despite spending most of his free time playing video games, is somehow in a serious relationship with the beautiful Angela (Tika Sumpter). James (Cube), Angela's brother and a veteran with the Atlanta Police Department, doesn't feel Ben is worthy of his sister's affections, so when Ben, after getting accepted to the police academy, confidently asks for James' blessing regarding Angela, the senior cop makes a proposal: Survive a day with me on the streets and you have my blessing to marry my sister.

And so off they go in James' squad car. This is where the hilarity is supposed to kick into high gear, but as we watch Ben timidly tangle with burly bikers blocking a handicapped parking space, tackle a crazy guy (comedian Gary Owen) throwing produce in a marketplace, and lose a verbal match to a lippy kid (rapper Benjamin "Lil P-Nut" Flores) on a playground, it becomes clear that the flimsy script (credited to four writers) will offer the actors little in the way of choice quips or promising scenarios, forcing them instead to animate their characters through sheer star power alone. So even though Kevin Hart is basically playing Chris Tucker in Rush Hour and Ice Cube is basically playing Nick Nolte in 48 Hrs., some of their own patented patter breaks free every now and then. Ben's ineptitude at a shooting range allows James to smugly lord over him, and Cube's slow-burn swagger works well in this context. As for Hart, his rapid-fire hucksterism is put to good use during a lengthy sequence in which Ben is forced to pose as a criminal kingpin.

Ride Along is instantly forgettable, but at least Cube and Hart provide it with a few choice moments. Everyone else involved with the production, from the director (Tim Story) to the supporting players (John Leguizamo, Bruce McGill, Laurence Fishburne, etc.), is simply along for the ride.