The Wedding Ringer: Seek an annulment 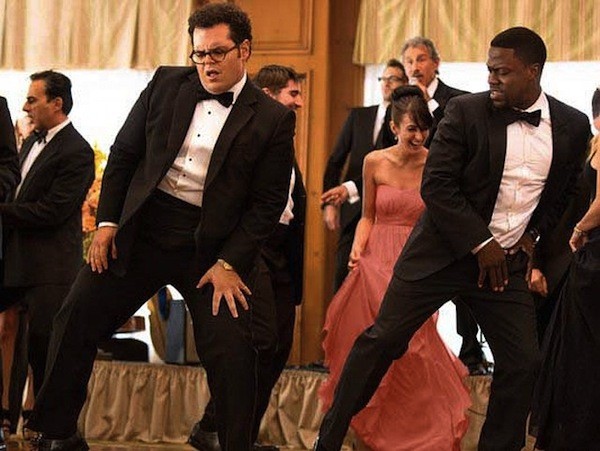 The workable premise of The Wedding Ringer posits that the awkward, overweight Doug Harris (Josh Gad) doesn't have a single friend in the entire world, which becomes a problem when his pretty fiancée Gretchen (Kaley Cuoco-Sweeting) wants to meet his best man and the groomsmen before the wedding. (How did they survive in social situations without his lack of buddies ever coming up before? Oh, never mind, or we'll be here all day with these sorts of questions.) So he hires Jimmy Callahan (Kevin Hart), whose job is to pose as BFFs for grooms in similar situations. But never before has Jimmy been asked to also produce a whole roster of faux groomsmen before — the term for this mission impossible of a package is "The Golden Tux" — so he sets about recruiting whatever wacky washouts he can find, from a nerd with three testicles to an ex-con known for raping other men in prison to that big dude from Lost.

Also among this motley crew is a hunk who's hilarious simply because he stu-stu-stutters. That's the level of insult comedy found throughout this picture, which, let's face it, is basically a Men's Rights Activist meme passing itself off as a motion picture. It follows the tired template of pairing a homely guy with a hottie (the reason why she's marrying him is dizzyingly daft). And when the hottie is revealed to be a heinous bitch? No problem! There's an even hotter hottie waiting in the wings to service our schlubby protagonist. And don't worry about the other misfits — there are hotties for all! On top of this, we also get the usual creaky swipes against nagging Asian women, helpless senior citizens and swishy homosexuals. Always the homosexuals. Gay panic in films of this ilk is nothing new, but the level here frequently reaches Terror Alert red.

There's a smattering of clever toss-away moments that reference various pop-culture touchstones (The Usual Suspects, The Goonies, Lost), but when left to fend for themselves, writer-director Jeremy Garelick and co-scripter Jay Lavender are at a loss and merely swipe entire plays from the likes of Hitch and Wedding Crashers. The only ingredient that makes this swampy stew even palatable is Hart, who continues to deliver inspired comic performances in dreck such as Grudge Match, Ride Along and now this. Just imagine the potential if his agent ever manages to get his hands on a good script.