The year’s wonders and blunders

During 2017, it seemed that movies mattered as much as ever.

While the country burned as Nero continued to fiddle with his Twitter account, Hollywood did its part to put out the flames. In real life, sexual predators were finally tagged and caged (yes, liberals condemn their perverts while conservatives elect theirs President; go figure). In reel life, filmmakers told the stories of folks who were increasingly being marginalized by an insidious right-wing agenda.

The year’s best pictures often reflected the issues of the day: the persecution of minorities; rampant misogyny; honest journalists fighting back against alternative facts; the have-nots having even less. And let’s not forget the wonderful heroine — make that superheroine — who would have no qualms about breaking the arm of any short-fingered vulgarian who tried to grab her by the ... ahem.

Of the 130 films I viewed over the past 12 months, here are my picks for the 10 best movies of 2017, followed by 10 worthy runner-ups, other assorted superlatives, and one final look at the worst of the worst. 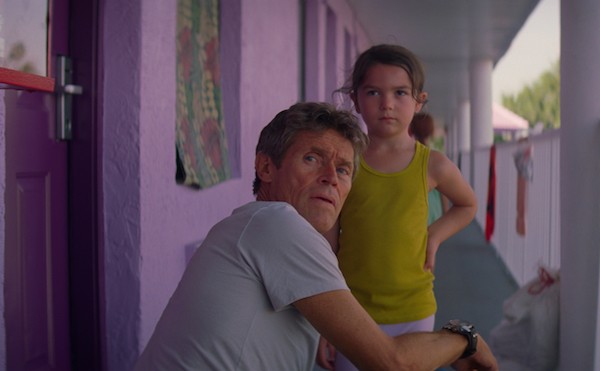 1. THE FLORIDA PROJECT (Sean Baker). The best film of 2017. The Florida Project was the name given to Disney World while it was still in development; now, it’s the title of a magnificent motion picture that’s set in the shadow of the iconic theme park. That would be the poverty-level Magic Kingdom motel, where single mom Halley (Bria Vinaite) lives with her mischievous 6-year-old daughter Moonee (Brooklynn Prince). Episodic in structure and damning in content, this masterful effort from writer-director Sean Baker offers a searing look at the America that’s all too often swept under the carpet and hidden from sight. Alternately humorous and heartbreaking, it finds Willem Dafoe delivering the performance of the year as Bobby, the stern but decent motel manager – and the closest thing to a Prince Charming that can be found in a setting tragically short on happily-ever-afters.

2. GET OUT (Jordan Peele). The best terror tale in at least a decade finds an African-American photographer (Daniel Kaluuya) remaining perpetually wary and on edge after he meets his white girlfriend’s odd family. As a thriller, Get Out is whip-smart and manages to avoid the types of myriad plotholes that tend to cripple pictures of this nature. It’s equally effective as social commentary, with writer-director Jordan Peele’s script examining such topical issues as miscegenation, cultural appropriation, police intimidation, racial profiling, and, of course, the notion that black lives matter.

3. THE POST (Steven Spielberg). These days, a timid and largely ineffectual media is par for the course — three cheers, then, for The Post, which may not match the brilliance of 1976’s All the President’s Men but nevertheless serves as a potent reminder of the potential power of the press. With Steven Spielberg at the helm and Tom Hanks and Meryl Streep heading the cast as Washington Post editor Ben Bradlee and publisher Kay Graham, this look at the furor surrounding the publishing of the Pentagon Papers represents old-school filmmaking at its most robust and rousing.

4. HAROLD AND LILLIAN: A HOLLYWOOD LOVE STORY (Daniel Raim). As the Harvey Weinstein saga reminds us, Hollywood can be a cesspool of abhorrent and indecent behavior. But on the other side of the equation rests this enormously entertaining documentary about storyboard artist Harold Michelson and film researcher Lillian Michelson, beloved behind-the-scenes experts who were married for 60 years. The wealth of film trivia is extraordinary, but it’s the romance between Harold and Lillian that truly propels this piece. 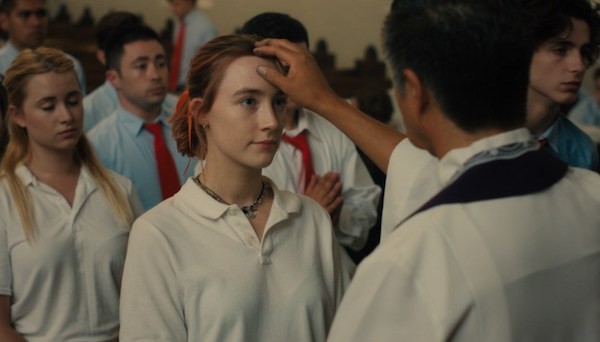 5. LADY BIRD (Greta Gerwig). Set in Sacramento in 2002, this lovely coming-of-age piece orbits around Christine McPherson (Saoirse Ronan), a teenager who bickers with her mom (Laurie Metcalf), bonds with her dad (Tracy Letts), and tackles the usual Herculean high school challenges. There isn’t much in Lady Bird that doesn’t feel recognizable from past films of this nature, but it’s writer-director Greta Gerwig’s ability to make her protagonist’s struggles appear raw and real that allows this affecting film to soar. 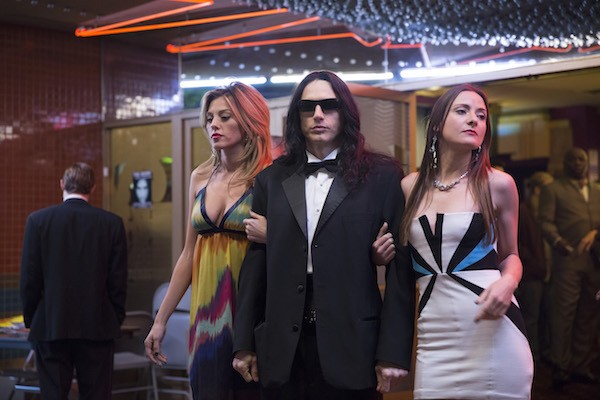 6. THE DISASTER ARTIST (James Franco). The spiritual companion piece to Tim Burton’s Ed Wood, this raucous effort is another cheerful Hollywood-insider piece about a man whose ambitions far outweigh his expertise. In this case, it’s Tommy Wiseau (beautifully played by James Franco), the mysterious writer-director-producer-star-financier of the atrocious 2003 cult sensation The Room. The Disaster Artist offers more laughs than any other 2017 release, but there’s an unexpected strain of poignancy also at work.

7. WONDER WOMAN (Patty Jenkins). In a year typically jam-packed with superhero sagas, this exciting and empowering movie easily emerged as the best of the bunch. Following a rash of genre flicks that mistook nihilism for gravitas, it’s one of the few to unequivocally maintain that there’s still a place for uncompromised champions in our world. As perfectly embodied by Gal Gadot, Princess Diana / Wonder Woman is compassionate and curious — and the progressive heroine we need in these troubled times. 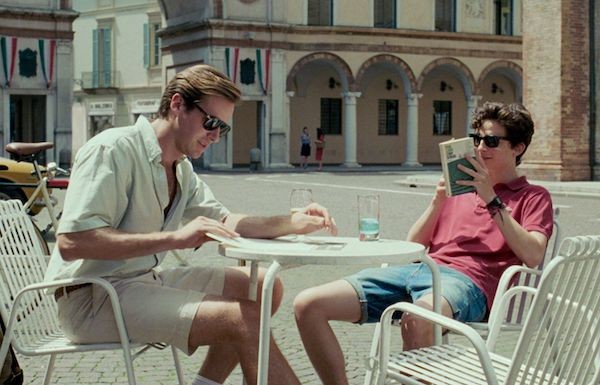 8. CALL ME BY YOUR NAME (Luca Guadagnino). A teenage boy (Timothée Chalamet) living in Italy with his loving parents spends a lazy summer hanging out with his girlfriend (Esther Garrel) and falling for his dad’s new assistant (Armie Hammer), a handsome young man who reciprocates his feelings. Like Lady Bird, here’s another exemplary coming-of-age tale set in the not-too-distant past (1983), this one drawing much of its strength from its wonderfully orchestrated marriage of sight, sound, and sensation. 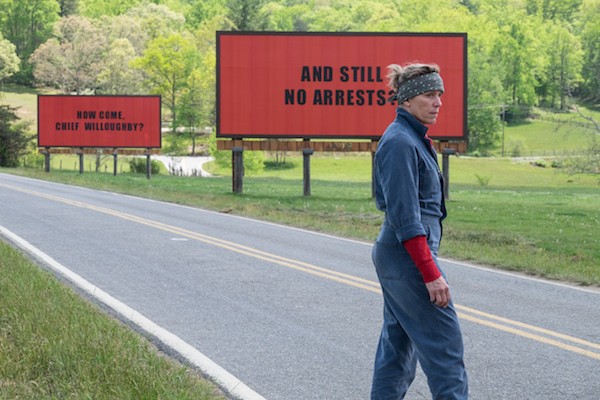 9. THREE BILLBOARDS OUTSIDE EBBING, MISSOURI (Martin McDonagh). Frustrated that no arrests have been made in the rape and murder of her daughter, a headstrong woman (Frances McDormand) confronts the local police in an unusual manner. The final stretch relies on too many coincidences, and Sam Rockwell’s character (a racist deputy) remains problematic throughout — even so, the first two-thirds are pitch-perfect, and McDormand and Woody Harrelson (as the congenial sheriff) are phenomenal. 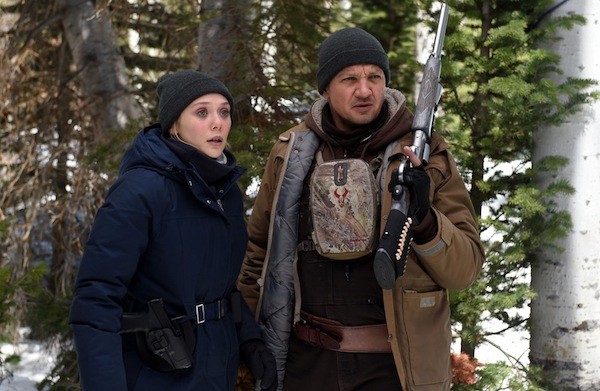 10. WIND RIVER (Taylor Sheridan). In snowstorm-battered Wyoming, a seasoned hunter (Jeremy Renner) and a greenhorn FBI agent (Elizabeth Olsen) investigate the death of a young Native American woman. What on the surface can pass as a standard murder-mystery instead becomes a remarkably complex exploration of various malaises, including the agony of familial loss, the systematic disenfranchisement of Native Americans, and the ever-present evil of toxic masculinity.

The Next 10 (Honorable Mentions, In Preferential Order): Mudbound; Land of Mine; T2 Trainspotting; Dunkirk; Quest; Beauty and the Beast; Blade Runner 2049; mother!; Coco; Your Name.

Best Supporting Actor: Willem Dafoe, The Florida Project; Woody Harrelson, Three Billboards Outside Ebbing, Missouri and War for the Planet of the Apes; Tracy Letts, Lady Bird and The Post; Steve Carell, Battle of the Sexes; Barry Keoghan, The Killing of a Sacred Deer

Sleepers: The Comedian; Good Time; The Killing of a Sacred Deer; Norman: The Moderate Rise and Tragic Fall of a New York Fixer; Their Finest; The Zookeeper’s Wife

Disappointments: The Beguiled; The Greatest Showman; Logan; Murder on the Orient Express; The Snowman; Wonderstruck 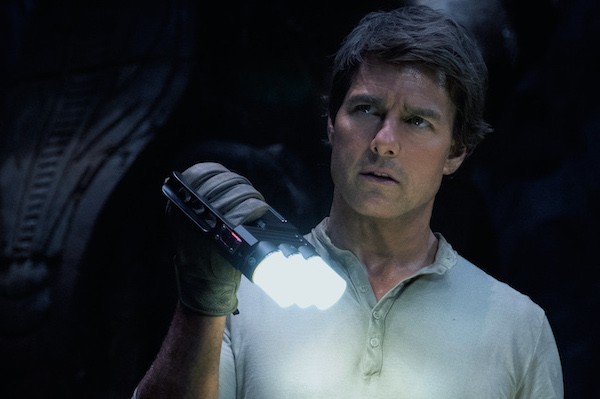 1. THE MUMMY A badly miscast Tom Cruise headlines the first – and, given the desultory box office, perhaps last – movie in the so-called Dark Universe franchise. A plastic product made by mercenaries, pimps and profiteers rather than filmmakers who give a damn, this abomination is impersonal and ineffectual, providing nothing in the way of thrills or chills or even basic entertainment value.

2. SUBURBICON Writer-director George Clooney dusted off a 30-year-old Coen Brothers script and unleashed a topical yet tone-deaf atrocity in which a nice black family in 1959 gets harassed by racist neighbors while the heinous white family next door literally gets away with murder. Obvious, overbearing and heavy-handed, it’s an embarrassment for everyone involved.

3. FIFTY SHADES DARKER There are at least 50 reasons why Fifty Shades Darker is almost every bit as awful as 2015’s Fifty Shades of Grey. The general prudishness necessary to snag an R rating and the lack of chemistry between Dakota Johnson and Jamie Dornan are but two. Ultimately, viewers will find more sexual currency in The LEGO Batman Movie than in this flaccid flick.

4. FREE FIRE A business transaction between various criminal lowlifes turns into a free-for-all gunfight, with characters shouting out feeble quips as they take potshots at each other. What was meant to be an exercise in style instead becomes an endurance test for audiences, as the film turns numbingly repetitive with its endless loop of uninteresting louts receiving their comeuppance.

5. FIST FIGHT The wimpiest teacher (Charlie Day) at a crummy high school is challenged to fisticuffs by the institution’s scariest instructor (Ice Cube). The appointment of the monstrous Betsy DeVos as Secretary of Education was the worst thing that happened to the U.S. school system in 2017, but arguably placing a distant second was the release of this flagrantly unfunny film.

6. THE HOUSE Needing emergency funds, three suburbanites turn an ordinary home into a Vegas-like casino. Even Requiem for a Dream offers more laughs than this smarmy dud in which all the performers basically play stand-up comics rather than actual people. It’s not unusual to see Will Ferrell in something this dreadful, but it’s disheartening to see Amy Poehler chained to this disaster. 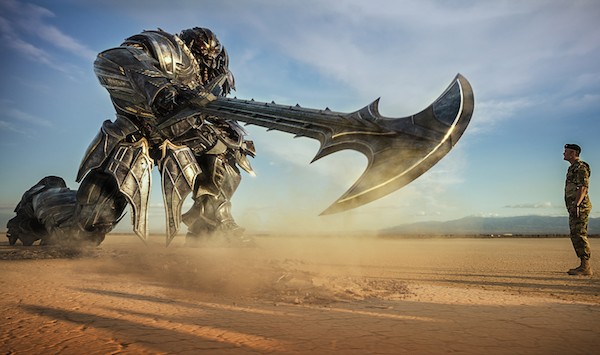 7. TRANSFORMERS: THE LAST KNIGHT The Transformers were responsible for the Allies winning World War II; the only person who can save humanity is Mark Wahlberg; the Decepticon named Mohawk actually sports a metallic Mohawk; and John Turturro discusses a book made out of goat scrotum. In other words, it’s business as usual in Michael Bay’s latest bray.

8. UNFORGETTABLE Katherine Heigl (no stranger to 10 Worst lists) delivers a one-note performance as a tightly wound divorcee who turns psychotic once her ex-husband (Geoff Stults) gives his heart to another woman (Rosario Dawson). Both daft and derivative, this is populated with characters so imbecilic, it’s amazing any of them can master a doorknob.

9. CHIPS The summer outing Baywatch got mercilessly trashed by most critics, but it looks as accomplished as The Fugitive when compared to this aggressively stupid adaptation of the vintage TV series about two motorcycle-riding California cops. Michael Peña is miscast as a stud; Dax Shepard (who also wrote and directed) is miscast as a funny individual.

10. KINGSMAN: THE GOLDEN CIRCLE Other titles might have conceivably deserved this slot more (e.g. Despicable Me 3, Pirates of the Caribbean 28), but this lame spy game works since it also ranks as the biggest disappointment of 2017. A distasteful and mean-spirited follow-up to the excellent Kingsman: The Secret Service, it’s less double-o-seven and more double-oh-forget-it.