August 09, 2017
comment
Eric Lee Lockwood, the music director of Charlotte's School of Rock, cofounder of the band Little District, and a fixture on the city's music scene for almost 15 years, died near his home in Pineville in the early morning hours of August 8. The much-respected singer-songwriter and music educator was 34.

Due to the delicate nature of Lockwood's death, the family has not released any further details at this time. He is survived by his wife Christina, and family that includes his cousin, Cole Flodin, the entire School of Rock student body, and David Bowie — his dog.

Lockwood, a native of Sandy Run, S.C., touched every life he came across in Charlotte's music communities with his irrepressible positive energy, love of music, dedication to his students, and pride in his work and theirs. Candace Williamson Steude recalls Lockwood's passion for music and drive to educate the next generation. “He had such an amazing energy for teaching; it just was awe-inspiring,” Steude, 43, a music educator who worked alongside Lockwood, says. “I became a better teacher just being in his presence and soaking up the unconditional support and encouragement.”

Chas Willimon was a member of Charlotte's Milkjug Music Collective with Lockwood in the early aughts. Willimon remembers the singer-songwriter as "a fine musician, a compassionate and funny guy and, to a fortunate many, a friend. You always knew you were a friend whenever you hung around him,” Willimon says.

Since Tuesday morning, Lockwood's Facebook page has been a stream of tributes — from friends, co-conspirators, and most poignantly, his students. The outpouring of grief and love from Lockwood's students — many of whom credit him with getting them out of their shells and helping them navigate the treacherous waters of adolescent self-image — is impossible to forget. 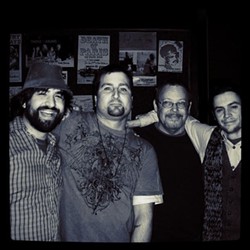 One of those grieving students is Magdalene Criswell, who recalled her first lesson with Lockwood in her post. "He made me play and sing my favorite song for him, even though I felt mortified by the very idea,” Criswell wrote. She was 17 at the time and convinced she was awful. But Lockwood loved it. “From that moment, he never stopped encouraging me in music, and in life," Criswell wrote. "There's no one like Eric Lockwood, and there's never going to be again.”

Lockwood, who joined School of Rock in 2009, soon became the top instructor and right-hand man to then-director Jill Livick. When asked to remember Lockwood, Livick was initially at a loss for words, but her words came eventually. “Eric was a friend, a mentor and a force. He was stubborn and vocal and passionate about making Charlotte a thriving music scene,” Livick says. The source of Lockwood's strength and passion, Livick is convinced, was his heart. “He wanted everyone to realize that they could be the best versions of themselves possible. His absence will be grieved by so many.”

It's not just students and fellow educators who are grieving — parents of Lockwood's students are saddened, too. “Eric was one of the truly good people you meet in your life, right to the core," says Mike Gruver, whose son Nick studied under Lockwood. "The respect that the kids had for him, and the respect of their parents, was unparallelled.” Teachers like Lockwood, Gruver says, come only once in a lifetime. “An incredible person.” Grover says. “The arts and music community and the School of Rock family won't be able to replace him.”