Community Rallies in Support of Couple Targeted by Racist Ranter 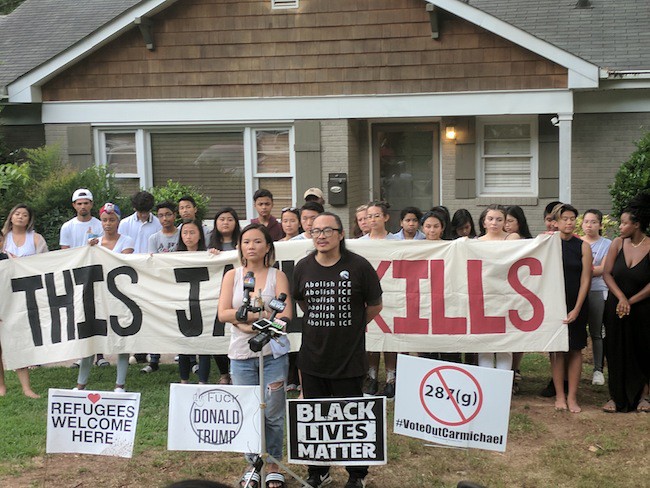 More than 30 people rallied outside the home of Tin Nguyen and Cat Bao Le on Tuesday night just two days after the couple posted a video showing a man harassing them in their front yard.

The man, who can be seen on the video yelling "I'm going to get you" at the couple and calling them the N-word, was apparently upset that the couple had a sign in their yard that read, "Fuck Donald Trump."

During a press conference in front of the home on Tuesday evening, Le said she was in the shower when she heard someone banging loudly on her door. She said she grabbed a towel and her phone and began recording when she realized the man was acting belligerent.

Le, executive director at the Southeast Asian Coalition, said she believes the man's actions were part of a bigger pattern of harassment aimed at minorities and immigrants during Donald Trump's presidency.


This just happened to our family in Charlotte. Please retweet!!!! pic.twitter.com/t51mMqMT5Z


Multiple online sources have identified the man as Charlotte's Cullen Heald, although Creative Loafing has not yet confirmed this. Heald's arrest record shows 31 infractions and arrests, including multiple charges of assault on a woman and domestic violence.

Nguyen, a local lawyer, said he did not trust the police to take action against Heald, so he did not call them, but that he appreciates the response both from the community around him and from the online community, in which the video has been shared thousands of times and made headlines.

"We know what happens to people like him," Nguyen said. "In the past few months, just turn on your TV, turn on your Facebook, you will see some white person wanting to police somebody just for breathing ... and so we know that that’s our justice. This video went viral within hours, it got picked up by all the different news networks, so that’s the kind of transformative justice that we believe in."

Nguyen said it's not the first time he and Le have been confronted over the yard sign, but that a previous call to local code enforcement was fruitless, as they hadn't broken any city ordinance.

"We have these signs here because we know that the president deserves this sign, he deserves this big middle finger," Nguyen said. He then referenced other signs in the yard stating, "Black Lives Matter" and "Refugees Welcome."

"We know that Cullen Heald was not just perturbed by the 'F Trump' sign, but he was perturbed by all of this," he said, referencing the multiple signs. "And the signs that we have here is the vision of the community that we believe in. We believe that refugees are welcome here. We elevate black lives and queer and trans black lives. We believe in all the immigrants that are in this community, and we do not stand with Trump one bit."