The Fourth of July Etiquette Guide

Don't be a BBQ Becky

We're coming up on yet another Independence Day, a usually chill holiday during which we grill food and spend time outside around family and friends. However, July 4th festivities often find us amongst strangers, as well. From Reedy Creek to Steele Creek, the parks will be packed and, come nightfall, folks will be congregating in neighborhoods around the city to throw caution to the wind and put on their own firework displays, laws be damned. This all sounds good, right? For the most part, yes. But with everything happening in the headlines this year, we see some opportunities for this day to go horribly wrong. That's why we're here with an Etiquette Guide for the Fourth of July to help you not be that asshole that ruins it for someone else. Because you do NOT want to be the next Barbecue Becky.

Do not call the police on black people simply for existing.

It all started with BBQ Becky (ok, it started a long time ago, but we're referring to when this topic began to trend). BBQ Becky is actually not named Becky at all, but Jennifer Schulte.

Schulte gained notoriety when she called the police on a group of black people barbecuing in an Oakland park. Despite her steel resolve when first confronted on video — and the fact that she dresses like a Navy Seal commando coaching softball — Schulte played the victim when police arrived and broke down in tears. Regardless, the barbecue was allowed to continue.

Since then, a white student called police on a black classmate sleeping in their dorm's common area. A white neighbor called police on Bob Marley's granddaughter as she left an Airbnb. Then most recently, we all met BBQ Becky's counterpart from across the bay, Permit Patty (Google her if you don't know).

No incidents like this have happened in Charlotte — at least not viral ones — so your goal as a white person this July 4 should be to not bring that shit here. Black people exist. Call the cops on them and you may be repsonsible for their death. Also, why would any sane person pass up an opportunity to instead join black folks having a barbecue?

Are you manning the grill at this year's cookout? Our best advice is to switch things up a little bit. Sure, go for the classics — the hamburgers, hot dogs, chicken, what have you — if that's how you get down. But try to remember the vegans and vegetarians who might be attending.

Want something cheap and easy? MorningStar sells some amazing Garden Veggie Patties you can find at most grocery stores.

Want to try something a little more inspired on the grill? Visit itdoesnttastelikechicken.com for some great recipes and avoid a blood bath from a nearby PETA activist — or the sad, hungry stares of your vegan friends.

As we gather to celebrate the "Land of the Free" and all that stuff we've been raised to believe through our entire lives, it would be easy to forget what innocent folks seeking asylum on our southern border are currently facing.

While families are being torn apart and/or sent back to homes and countries where they face desperation and, in some cases, certain death, those undocumented who have already made it across the border now live in fear of being sniffed out by overzealous agents of an evermore terroristic ICE agency.

There are far too many people in this country and in this city that get a perverse pleasure out of reading paragraphs like the one above, so what can be done to counteract them?

Befriend an undocumented person. Learn their story. Don't let them become the "other." Invite them to a get together, or better yet, attend a function where they feel safe.

It also wouldn't hurt to donate your time and/or money to a local organization like ourBRIDGE for KIDS, which works with refugee and immigrant children in Charlotte who may be living in a world of fear under the current presidential administration.

Don't shoot off fireworks wherever you damn well please.

This one just takes a little bit of empathy (are you seeing a pattern here?). There are countless dogs in the city of Charlotte, and chances are they're not fans of fireworks. Many dogs freak the fuck out when they hear fireworks, more so than during thunderstorms or other common loud incidents.

The best way around this is to just talk to your neighbors or the folks who live around the area you plan to light up on Wednesday night or the following weekend. A dog owner's life can be made remarkably better if you just move it down the street a little bit. Chances are the dog is going to hear fireworks that night regardless, but trying to lower the impact of your actions can make a big difference.

While not as common, some military veterans or other folks suffering from PTSD can be triggered by fireworks, as well. All we ask is that you know your neighbors. That shouldn't be too hard.

And if you're still going hard on the fireworks after July 8, then you're just being a dick.

While all four of the above suggestions are based on getting to know your fellow Charlotteans a little better, we admit that this one is based on pissing a few of them off just a little bit.

Trump supporters and other folks who prefer to turn a blind eye to injustice in America have focused in on NFL anthem protests as a treasonous insult to the country's military, despite all pronouncements to the contrary by participating kneelers.

So is the host of your cookout playing the anthem or some other Sousa-esque fuckery? Take that knee and have that conversation. We'll all be better for it one day.

Now that you know how to behave yourself, it's time to get out there and party. There's plenty of stuff going on for the Fourth and during the week or so leading up to it, but we found 10 that we think will be the coolest.

The second annual Independence Day celebration at this west CLT brewery, expect music from The Stark Reality acoustic trio between 4-7 p.m., and food from Cousins Maine Lobster and King of Pops for most of the afternoon. Pitchers of any beer under 7 percent alcohol will go for just $10.

Sycamore looks to step things up with a cookout but also plenty of food trucks including Papi Queso Food Truck, Queen City Sliders, JJ's Red Hots, OooWee BBQ and more. Look for live music on the main stage from Perpetual Groove and Atlas Road Crew. Hide out from the sun with tents and misting fans before fireworks start at dark.

For those who consider themselves patriots — and no, not the ones who call themselves "Patriot" on their Twitter bio and spend all day harassing libtards and snowflakes online — there's no more intense fireworks show than this one, which includes Charlotte Symphony Orchestra renditions of Sousa marches, the Armed Forces medley and more.

Nothing says Charlotte quite like celebrating Independence Day with some racing. Following an evening of races in which Legend Cars and Bandoleros will heat up the frontstretch at Charlotte Motor Speedway, attendees can get driver autographs and then stick around for a fireworks show over the midfield.

Long live the Queen City. Charlotte is turning 250 years old this year, and city leaders will be on hand to help ring in that milestone at Memorial Stadium on Tuesday night, as CLT250 Chairman Gene Woods joins members of city and county government to help bring us all celebrate a quarter millennia together.

The folks at the Whitewater Center are celebrating a full two days of Independence this year with yoga in the morning, live music in the afternoon and fireworks at night. Catch Dangermuffin and Marc Broussard on Tuesday, and/or Sam Morrow and Colter Wall on Wednesday. Fireworks start at 9:30 p.m. on each night.

One of the more disgusting things about this country — and the second biggest reason behind racism as to why our immigration situation is such a mess — is the ridiculous wait time that folks who want to become naturalized citizens have to go through. In view of this fact and the recent terror involved with being an undocumented immigrant in the U.S., it's all the more beautiful to watch folks experience their dreams come true at a naturalization ceremony held at the Charlotte Museum of History. Mix in food, a History Talks lecture, the ringing of the American Freedom bell and firework-themed crafts and you've got a party.

Cookout at the Bot

Things are getting fruity at the Wooden Robot in South End on July 4, as the staff there will brew up batches of Strawberry Swirl It!, Blueberry Swirl It! and Reserve Blanc and will be pouring up flights of these specialties until supplies last, which promises not to be long. Wooden Robot's culinary cohorts at Kr8 Gastropub will grill hamburgers, hot dogs and a vegetarian option, so everyone can get a bite to eat, even if you're not a drinker. 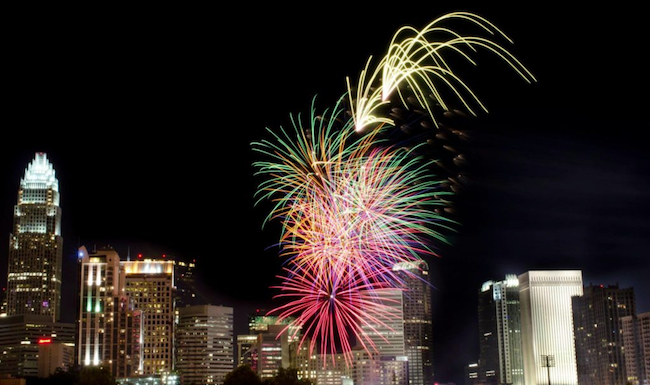 Ever since the BB&T Ballpark went up, they've had the fireworks scene on lock. Forget about the display they host every Friday night when the Knights are in town, the show they put on for July 4 is the biggest one in town. Hell, it's the biggest one in the South. The Skyshow is preceded by a street party in and around the neighboring Romare Bearden Park throughout the afternoon that includes live music and all types of food.

It's been 18 years and 18 pigs have been sacrificed for the sake of Plaza Midwood residents and friends. The folks from The Diamond will be serving pulled pork plates and sandwiches, hot dogs and cold beer — both canned and draught. While the food and drinks come at a price, the live music and camaraderie are free of charge. Many area businesses will also be holding sales and other special attractions.

Where: The Diamond, 1901 Commonwealth Ave.