Theater review: Over the River and Through the Woods

When Nick Cristano takes us Over the River and Through the Woods to his maternal grandparents’ house in Hoboken, New Jersey, the weekly rendezvous not only reconnects him with Grandma’s ample repertoire of Italian recipes, it keeps him in touch with the only remnants of his family left in the Northeast. That seems to go both ways, for the Gianellis and the Cristanos, who always drop in with Nick for Mama Aïda’s prodigious Sunday banquets. 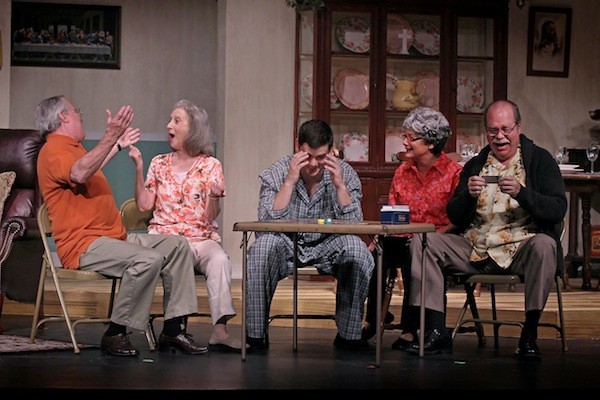 The clinging, however, is a one-way street, and the lengths that Nick’s grandparents will go to keep him close by are both comical and poignant in Joe DiPietro’s shape-shifting script. See, there are two reasons why the days of these Sunday feasts are numbered: Nick has been offered a promotion by his marketing firm that will station him in Seattle and, more fundamentally, those grandparents are — you guessed it — old.

Charlotte Repertory Theatre did this bittersweet comedy to kick off its final season in 2004. If you recognize that CPCC Summer Theatre’s non-musical offerings have always been confined to farces and thrillers, then you’ll acknowledge that this effort, directed by Carey Kugler, is a historic departure. Delivered to us by a cast almost entirely comprised of longtime local favorites, we have another artistic winner here, though attendance at panoramic Pease Auditorium wasn’t any more robust than the previous 41st season musicals were at Halton Theater.

Through Act 1, Over the River doesn’t stray too far from CPCC’s farcical inclinations. One wonderful shtick follows another as Nick tries to sit the grandfolk down quietly and break the news. The moment of truth is delayed by Nicky’s hesitation, compounded by the elders’ eccentricities, Aïda’s food-serving reflex, and Grandpa Frank’s refusal to turn on the air conditioner before July. With just a few weeks to turn the tide, Emma hatches her plot to keep her Nicky in town, setting him up — without his knowledge — on a blind date with a bright comely nurse, Caitlin O’Hare. She’s Irish, so you know they’re desperate!

Caitlin is fine with this dinner date, but Nick is freaking out, not merely because he’s blindsided but because he’s getting acquainted with his date at Aïda’s dinner table, with all four grandparents watching every bite and hovering over every word. Voluble immigrant Italians that they are, they have quite a bit to say themselves.

Kugler doesn’t prod his elder generation to sound any more Italian than Rep’s, but I found I enjoyed the current production at Pease Auditorium far more. As a group, the old folk become more three-dimensional. James K. Flynn has a particularly nuanced deadpan as he brings out Frank’s comical dimensions that transitions very naturally to the gravity of Act 2, and Gerald Colbert as Nunzio Cristano, with his gray hair slicked down, has begun to look so much like my dad — and my recently deceased Uncle Abe — that cold objectivity is impossible for me, particularly when Nunzio confides in us that he has terminal cancer.

Each of the two men has a pivotal one-on-one with Nicky, and each one of them balances our emotions between the need for a man to blossom into independence and the need for a parent to know how — and when — to let go. Flynn and Colbert handle these like the old pros they are.

Polly Adkins puts enough soul into Aïda’s devout belief in the efficacy of food to keep the running joke from growing too stale, lightly sprinkling our hostess with a loving attitude toward everyone, while Annette Gill brings more redeeming ethnic flavor to the meddlesome Emma than I found in her frosty 2004 counterpart. More of a sunny good sport in the 2004 version, Caitlin is now more sensible, mature, and deeply appreciative of the old folks’ value in Caroline Renfro’s portrayal. So we see far more clearly the growing up that Nick needs to do.

The biggest difference-maker is Brandon James as our protagonist. At various stages in his journey, Nick is childish, disrespectful, selfish, and ashamed of his own family. Yet we must not only find him appealing as a narrator, we must see Nick as worthy of all the fuss that his grandparents are making over him. Somehow James walks this tightrope without breaking into multiple personalities. There’s a slightly hyper energy as he interacts with his family, a touch of shyness when he encounters Caitlin, and an enthusiasm for telling the story to us.

Kugler not only gets the chemistry right in directing this savvy cast, he makes sure the energy is dialed up properly. James Burns’ convincingly suburban set design leaves a wee patch at extreme stage left, with an outdoor bench for a series of intimate conversations that occur outside the Gianelli home. All of these key moments were more audible to me, sitting on the aisle at the opposite side of the theater, than many of the shows I’ve seen at Pease where I’ve been much closer to the action.

With a sleek running time of 92 minutes plus intermission, this was a satisfying evening from beginning to end.