If you went into Thursday night's show expecting to see a different side of Deftones singer Chino Moreno, you may have been surprised. While Moreno played 15 songs with his side project +++, they weren't always the mellow versions heard on the band's two EPs and full-length album. Moreno found plenty of time to, well, be himself.

+++ (Crosses) was one of four bands performing as a partnership between the Fillmore and 106.5 The End for the New Music Revolution events (this was the fourth). The series is a great way to check out new acts without breaking the bank - tickets were just $10.65. That, and if you don't like the band, chances are they won't be on stage for very long. 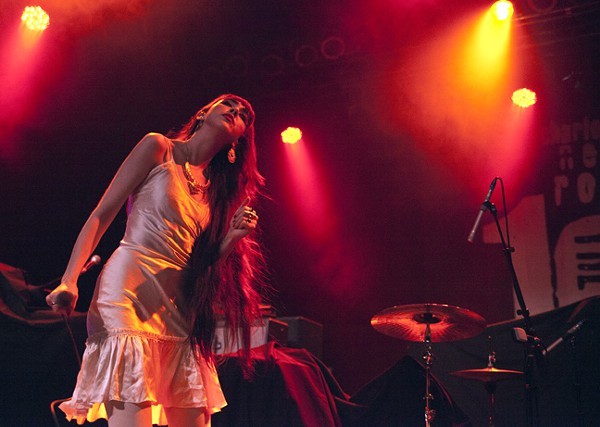 The night started with the emotive Gypsy-punk trio Nostalghia. Fronted by charismatic singer Ciscandra Nostalghia, the group teeters between a variety of genres - electronic, rock, classical - in an amalgam of sonic landscapes. The band's music lurches into screams or operatic howls without notice, while at other times providing ethereal moments that draw emotion from the listener. It didn't take long to win over a crowd that was left wanting more when the final notes rang out.

Next up was Wild Cub, a Nashville quintet that's been riding high on its single, "Thunder Clatter." The band's indie rock fused with some '80s synth got the crowd dancing. From the opening notes, singer Keegan DeWitt never stopped moving - lifting a knee up while singing, jumping in place or dancing around the stage. The band's dynamic performance is one of the reasons it keeps popping up on the national radar. It's difficult to follow up a familiar riff from a hit single, but Wild Cub is steadily winning fans over.

Sleeper Agent followed suit in similar indie-rock fashion, fronted by singer Alex Kandel. If the band's set felt a little rushed, it's hard to blame the delay - a 106.5 contest winner took center stage to propose to his girlfriend of three years. Given Sleeper Agent's stage presence, it's no surprise members are good friends with fellow high-energy Kentucky band Cage the Elephant. Kandel and company's latest single, "Waves," got the crowd moving as anticipation built toward the headliner.

As the lights dimmed before the final act, chants of "Chino!" rang out among the venue's patrons. While the band started off with a more electronic sound, it didn't take long for +++ to break out of that mold and into familiar Deftones territory with churning guitar and Moreno's signature screams. From there, the band was unrelenting. One minute, it caressed listeners' ears with mellow wanderings; the next, Moreno and company amped things up again. +++ hit a fever pitch toward the end of the night before slowing things down with "+rophy" and "Op+ion" to close out the set.

A two-song encore was kicked off by a cover of Q Lazarus' "Goodbye Horses," familiar, perhaps, because of a memorable (NSFW) Buffalo Bill scene in Silence of the Lambs. If you went into the Fillmore as a fan of the +++ albums, you may have been hoping for something less intense than the band offered. If you went in as a Deftones fan, you left knowing it's good that some singers never change.