by Michael A. Cooper Jr.

On Wednesday afternoon, state Sen. Dan Clodfelter was sworn in as the 57th mayor of Charlotte, the city's fourth mayor in less than a year.

He comes to office as the choice of 10 City Council members, an unelected replacement for Patrick Cannon, who resigned his post the same day he was arrested on blah, blah, blah, you know the story.

Clodfelter served on the council before moving to the legislature, but after years as a senator in Raleigh, he enters the job a relatively unknown figure for many in Charlotte.

I sat down with our new mayor in his new office on the 15th floor, on the morning of his swearing-in, to discuss the crazy week he's had, the transition into his new role and the challenges facing the city. 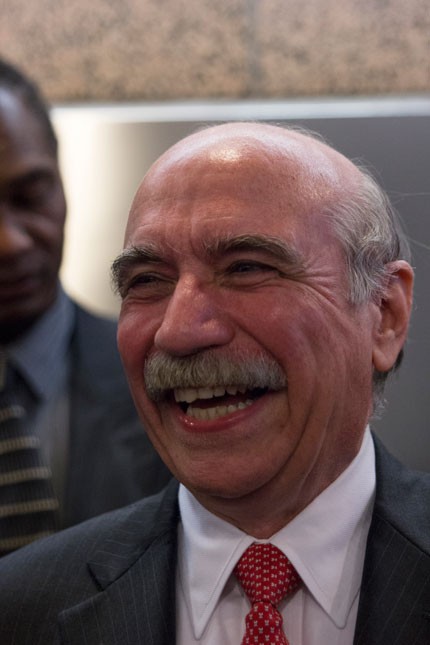 CL: Welcome to the office, I guess?
I've probably spent more time in this office in the past 24 hours than the whole time I was on city council.

Your assistant said that Creative Loafing was not originally on the list for interviews today and that you specifically asked for us. Why?
I used to talk to you guys all the time when I was on council. I always thought y'all were the people it was cool to talk to. You're always asking interesting questions. So I had to think about things I wasn't normally thinking about.

Is this office your swan song in public life?
Nobody can see the future. I don't have any plans beyond this. I didn't even have a plan for this. But if this is it, I won't feel unfulfilled.

Do you feel like a placeholder?
No, I don't. The job is what you make it.

Are you brining in an agenda of your own?
You guys have watched me in the legislature. You know I have ideas. But I don't intend to replace what the council is doing. I don't have the right to do that. That's not what this is all about. I won't be bashful about bringing ideas up, but not in a way that is disruptive. I don't work that way.

Did you honestly not hear rumors about Patrick Cannon? I heard a number of elected officials express concern about him in the weeks before he was arrested.
There are rumors about everything about everybody. I don't know what the rumors are about me. But I don't credit rumors. I don't have time for that.

What has your family said about all this?
I wouldn't be here if they hadn't said yes. I know better than that.

Do you feel like you can do more in Charlotte than in a Republican-controlled Raleigh?
I think I can be of more use working this job. I actually think I can be more helpful on state-level issues from this job now too.

How can you bring together the Democratic divide on City Council when your own appointment was symbolic of that divide?
I don't think it will be tough. I don't look at councils as factions. I see it as a series of 11 very talented people.

What can actually be done in the next year and a half to improve the lives of struggling people?
You're asking me for a crystal ball. That's a tall-order question. I think the council's priorities and goals are very positive. And if we carry forward, we'll see improvements. I've been at this stuff for 30 years, and I've watched areas of town go down, and I've watched them turn around. There is no overnight magic bullet. But that doesn't mean it can't happen. It takes a lot of patience, it takes diligence, and it takes sticking with it. And it will happen. I represented NoDa on the City Council in 1987 when I was first elected. They were crying for ideas about how to get that initiative. But they were a committed group of people. A small group of committed people made it work. They just continued to chip away at it. Look at the place today.

What are the five biggest problems facing Charlotte today?
I'm a little not up to speed with the council on that, but I think there are some immediate challenges like the airport. We have to get through that so we can get back to the non-glamorous work. That's the biggest challenge, getting the hot-button issues off our plate.

What can you do to restore trust in this office?
Trust is a thing that comes from listening, watching and observing. It is not something you hand out. I know the council is very interested in taking a look at city ethics policy. That would be a good thing for restoring public trust. I've been through that on the state level in 2006, when we did the complete rewrite of the state ethics laws.

You have a year and a half with a giant microphone and a big pulpit. What are you going to talk about?
I have to think some more about that. You're giving me my work assignment rather than getting answers to questions. So the next time we talk... .

What do you do for fun in Charlotte? What is your favorite neighborhood?
I live in the Elizabeth neighborhood. I'm part of a group that moved in in the '70s and watched it turn there. I'm a pretty voracious reader. I read everything I can get my hands on. And every chance I get to get up to the western part of the state and the high country, I try that. We have a place in Yancey County that nobody can find.

Have you ever thought about shaving the mustache?
It's scary. I've thought about it a lot, but every time I look to do it I get a little scared because I don't remember anymore what it was like, or what I looked like. The other thing that scares me is, my wife's never seen me without it.