I've traveled to Turkey twice to explore its vast and varying cities, which contain some of the most magnificent architectural structures (Blue Mosque, Süleymaniye Mosque, Hagia Sophia, Topkapi Palace in Istanbul and Mevlana Museum in Konya, to name just a few), so I was intrigued by Unity Productions Foundation's 2012 documentary, Islamic Art: Mirror of the Invisible World. 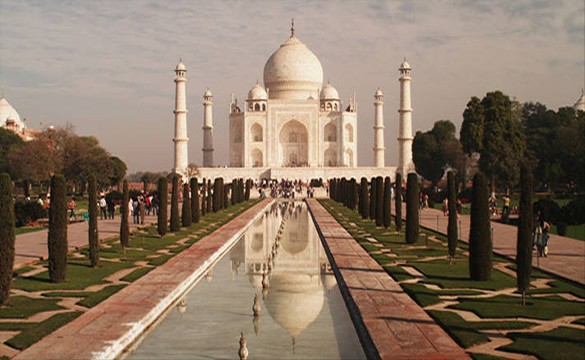 The film, which screens at International House on Jan. 8, covers the rich contributions that Islamic art and architecture has made to the world. In 90 minutes (clearly, not enough time to cover everything), viewers are shown clips of structures and artwork from nine countries - including Egypt, Israel, Syria, Tunisia, Turkey, Iran, Spain, Mali and India (of course, there's the Taj Mahal - pictured above). Intricate and stunning detail from mosques, palaces, art, calligraphy and sculptures are unveiled and explained through the context of Islam and 1,400 years of history. The film is narrated by Academy Award winning actress Susan Sarandon. Following the screening there will be a discussion led by Amad Shakur, who is the founder/director of the Center for the African Diaspora, a research institute in Charlotte. Check out the trailer below. Free admission. Jan. 8, 7 p.m. to 8:30 p.m. International House, 1817 Central Ave. 704-333-8099. www.ihclt.org.