On the site of what is now Metropolitan, home of Trader Joe's and Target in midtown, was once a mall called Charlottetown. Natives will remember a time capsule was buried in the ground before construction began. Do you know what happened to the mall and the capsule? - Branden Anderson, Charlotte

Charlottetown was torn down in late 2005 after surviving 46 years of retail service and different incarnations, once as "Outlet Square" and then "Midtown Square."

It was ground breaking at the time of its opening - the first enclosed shopping center in all of the Southeast and the third in the entire country. 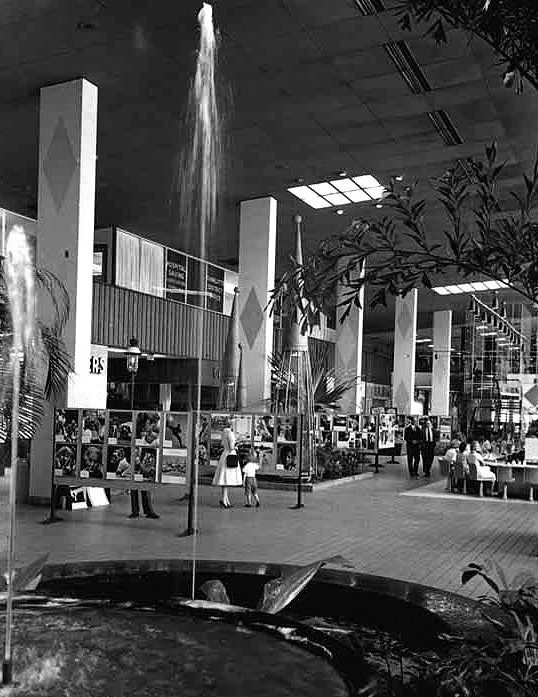 In fact, the grand-opening ceremony in 1959 attracted major media attention and hordes of Charlotteans anxious to spend their money in a temperature-controlled environment that boasted 40 stores, among them the high-end retailer Bon Marche', the drug store Eckerds, a Colonial Food Store, multiple restaurants, and specialty stores.

A Charlotte Observer story dated Oct. 28, 1959 said the following: "Ceremonies this morning will herald the beginning of a new era in shopping for the Carolinas and the southeast [sic] as Charlottetown Mall opens to the public. To usher in the historic occasion will be a college band, fanfare, short speeches, high officials and some top businessmen...A highlight of the opening ceremonies will be the burial of a time capsule. This miniature vault will contain editions of The Charlotte Observer and The Charlotte News, radio recordings...predictions for the future...and other data pertinent to the grand opening. It is scheduled to be dug up on the silver anniversary of the mall's opening, a quarter of a century from now."

Much had changed since Charlottetown Mall opened. Several stores had come and gone and larger enclosed shopping centers and malls, such as SouthPark and Eastland, had opened. Customers flocked to the new options, which featured more retailers and dining and entertainment opportunities than Charlottetown. 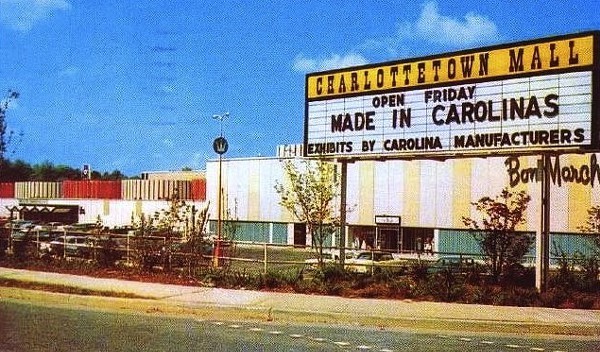 Only 300 people showed up for the unearthing of the time capsule, versus the estimated 50,000 people present opening day in 1959.

What was referred to in old newspaper stories as a "small vault" - but confirmed by onlookers as a child's coffin - was used to house the collection of items intended to show a future generation what the world was like at the dawn of Charlottetown Mall. Those same articles reported the container was "hermetically sealed."

Unfortunately, substantial moisture found its way into the container, leaving behind damaged, scant remnants. Wrote the Observer: inside were "gray photographs, yellowed newspaper clippings, a few predictions, and a map of Charlotte, but only the top page of each item could be read."

The unsuccessful "hermetic sealing" might have robbed the once nationally acclaimed shopping center of its heritage, but it didn't stop owners and managers from trying again. A new capsule was to be buried the following month and reopened on Oct. 28, 2009.

By 1984, Charlottetown had become Outlet Square. The then-management team, the Charlotte News reported, collected for the new time capsule pop culture items of the day, such as new-wave sunglasses and hot-pink bobby socks, along with predictions for the future from various local students. Among those predictions was the clearly gifted foresight of Mandy Gamble, then a seventh grader from McClintock Junior High School: "In the year 2009, I predict that school excuses will be changed from 'the dog ate it,' to 'the computer broke down.'"

Outlet Square took another stab at rebranding, becoming Midtown Square, but its efforts were in vain. The small mall once lauded by developers to "have it all" became a sad and vacant behemoth left behind for upscale boutique malls, Internet shopping and the Home Shopping Network. It had dwindled to only a handful of operating stores with few, if any, shoppers and ghostly abandoned storefronts.

It had one last gasp at popularity in its final days among a crowd with something other than shopping on its mind: horndogs used the vacant shops as places to score a quick shag.

When it was announced that the site was to be demolished, native Charlotteans who recalled the time capsule spoke out to ensure its contents were retrieved. So were they?

After several phone calls and skimming through a handful of documents, I found the whereabouts of the second time capsule. Dug up by Pappas Properties, the company responsible for developing Metropolitan, it remains in their possession.

"It looks like a small child's coffin," said a Pappas representative who declined to be identified. "It's on a shelf in our break room, but it's stuck shut. I can't get it open."

No matter. We know what's inside: bobby socks, sunglasses, and the thoughts of children from 29 years ago.