Question the Queen City: How did a train end up in Freedom Park?

I recently visited Freedom Park and saw part of an old train stationed on the park's grounds. How did it get there and where did it come from? - Daniel Hayes, Charlotte

The old Gainesville-Midland 301 has charmed generations of Charlotteans. It rolled off the lines of the Philadelphia Baldwin Locomotive works in 1920 and was shipped to Florida to serve the industrial rail line service Charlotte Harbor and Northern (the company had nothing to do with the city of Charlotte, aside from sharing a name). Once there, it shuttled between various small towns along Florida's west coast. 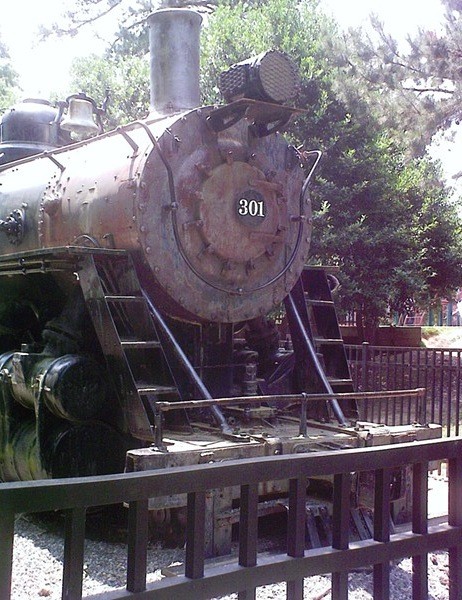 Beginning life with an oil-burning engine and the number 72 painted on the side, it was converted to a coal-burning steam locomotive when Charlotte Harbor and Northern was taken over by Seaboard in 1926. Seaboard gave it a new paint job and number - 930 - but its route remained the same, serving the region for 31 years.

In 1951, the aging engine got its last shot at public service when it was purchased by Gainesville-Midland, which gave it another paint job and the number 301. Over the next eight years it ran a continuous 35-mile jaunt in Georgia between Gainesville and Athens. By the time 1959 rolled around, steam powered engines were quickly disappearing into history and being replaced by faster and less noisy diesel engine trains.

The 301 had served long and hard. Repairs to the engine were becoming more frequent and parts harder to find, as were mechanics with the knowledge and desire to keep the aging behemoths up and running.

Ironically, Seaboard, the 301's former owner, acquired Gainesville-Midland that same year. The company wanted the rail lines and the access they provided in Georgia - but Seaboard had no desire to hang on to antique steam engines like the 301.

After the decision was made to retire the former workhorse, it was eventually offered as a gift to Charlotte after the city had requested a steam locomotive for display from Seaboard, which began in North Carolina. Though the company had none to offer at the time of Charlotte's request, it eventually came into one - the 301 - when it acquired Gainesville-Midland.

On a cold day in November 1959, the train crept slowly into the Queen City, where it was partially disassembled, and then trucked to its current location in Freedom Park to serve as a recreational play site for the city's children.

"I can still recall when it came to own," says Charlotte native Rebecca Kern. "I was just a little girl - around 5 at the time - and it was a big deal. Older folks and kids lined the streets at different junctions as it rolled into the city. My dad and I got to see it at Central Avenue. It was like watching something riding out of history as it passed. It was so exciting. It was also kind of funny; I remember dogs barking like crazy because of the noise and chasing the steam from the engine."

Once installed at Freedom Park, it was repainted and renamed "The Freedom Park Express" for a time, and it was surrounded by grey, pea-sized gravel. Children were allowed to crawl in and around it at will.

Several years and countless falls and scrapes later, access to the train is now much more limited. It is surrounded by a black metal fence, and entry is only allowed into the former conductor's chamber by an elevated footbridge.

"I'm not sure who ever thought gravel on a playground was a good idea when kids are involved," Kern said, laughing. "But I had lots of fun crawling all over that thing for many years, as I'm sure lots of Charlotte children did. Even though it's a lot safer for kids now, it does seem like they're missing out on some fun."

Now repainted and restored with the number and name it bore the day it first came to town, it largely serves as an exhibit of a mode of transportation long gone.