Nazi-tastic rally on Saturday draws the usual suspect, and then some

I've generally taken for granted that I would be the palest person in any given audience. That was based on the now-mistaken assumption that I would never go to a neo-Nazi rally.

Creative Loafing asked me to go and watch a rally by the National Socialist Movement, a neo-Nazi party, and the counter-protest organized by the Latin American Coalition.

I headed over to the rally at the Old City Hall downtown on Saturday afternoon and found it sparsely populated. Sweet, I'd arrived early.

NAZI DEEP THOUGHT FOR THE DAY: If you're a neo-Nazi and you get lost in the city, who do you get directions from?

You know what's awkward? Getting to a party too early. And there is nothing as awkward as getting to an neo-Nazi rally too soon. I arrived and saw only three neo-Nazis. Three. For a little while I was worried this was going to be it. What if today was a sick day and all of the neo-Nazis were under the weather, presumably lying in their beds curled up with their Hitler body pillows having just called their moms to come make them some all-white meat chicken noodle soup and read their limited-run illustrated edition of Mein Kampf to them?

Or they were just elsewhere.

The first counter-protesters to show up were - and I don't think they'd feel insulted by me saying this - the Milestone/punk crowd. If you don't know the Milestone club in Charlotte, you should go right now. (I'll wait. Back now? Great.) This collection of folks loves punk music, punk attire and reasonably priced beverages. If there's one thing punks hate, its laundry day. If there's a second thing they hate, it's Nazis.

The punks started an in-depth discussion with the neo-Nazis on their racial lineage. Whereas the neo-Nazis were curious what shade and religion the punks' parents were, the punks were more concerned about what barnyard animal the neo-Nazis had mated with and whether or not they would like to arrange a stop later in the day to go over some of the finer points of the discussion, perhaps out of sight of the police.

Shortly after that, a second group of protesters came. They were the headliners, if you will. Yes, I'm referring to the clown protesters. They wore big clown noses and rainbow-colored wigs, and honked horns. Some threw flour - "flour power," you know.

As I stood waiting for the main douche-tachment of neo-Nazis to arrive (apparently they hadn't yet), I got drawn into a few conversations. One gentleman came up to me and at some point said the following:

I declined all parts of his offer but watched him as he walked around.

He eventually found a guy to bum a cigarette from - he pulled out the swastika flag for him to see, too. The guy he was trying to get the cigarette from screamed, "This [impolite word] has a Nazi flag!" In a rather predictable turn of events, the guy was quickly surrounded by people who were curious if he had any other Nazi material or perhaps if he had Nazi flags inside of him ... like, maybe he was a Nazi piñata. The police came to his rescue and saw him safely off the premises. He stood looking somewhat frazzled and confused and his swastika flag was torn to shreds.

A while later, an older gentleman carrying what I presume was his granddaughter kindly asked the group I was standing with, "Excuse me, but are y'all ... are y'all... with them or against them?"

"Against," the guy next to me said.

And then came the main Nazis.

They marched in a banner-bearing parade in as manly and world-dominating a fashion as one can, given that they were in a parade with banners.

I'm not sure what I expected. Racist reality programs on cable TV are in short supply, and I really hope shorter demand, so I guess I was a little surprised that the fun didn't stop with just the neo-Nazis. With them were the Ku Klux Klan, skinheads, just plain ol' racists and a couple of bikers. Also, one racist was there in jeans and an unlabeled T-shirt with no sleeves (I believe that's called racist casual). I assume he was a racist. He could have been an intern or a freelance racist of some sort.

Who gets to see the KKK these days? I mean, I heard the stories when I was a kid, but over the years they've just kind of drifted away and you only see them in town every once in a while, like locusts and Rolling Stones farewell tours.

The most entertaining part of the day, though, were the stereotypes that even the Nazis couldn't escape.

My personal favorite was the master of ceremonies. I realize he probably doesn't actually refer to himself as an MC, but he was an MC just the same. He came out, slouched over the podium like an MC and made really horrible opener jokes.

Another guy was clearly the A/V guy for the group. (I guess it makes sense that a few dozen racists would need some support services.) He's got to have it the worst. He's not only a Nazi - he's a Nazi dork.

Whenever the other racists can't figure out how to light the cross on fire, they have to call this guy to come over and speak dismissively to them about how they should be treating their equipment. In the end, he has to light the thing himself. You have to feel bad for the guy. And then you remember he's a Nazi.

Then there was the Nazi dress code.

Look, dressing in all black: That's totally cool. Very intimidating. But can your outfits be as consistent? For every one of them out there looking like a barely restrained psychopath on the verge of a genocidal murder spree, there was another looking as if he had just rolled out of bed and could only find second-hand fat clothes once worn by a goth kid.

My suggestion: For your next hate rally, get everyone in your group together a few days beforehand and agree on what the attire will be and what you're going to do and say. You can't have Goofus & Gallant when you're neo-Nazis. You're the master race. Everyone has to be Gallant.

It bears mentioning that there were female neo-Nazis, too. (I suppose this is the one situation in which that old Rush Limbaugh adage "femiNazi" would be appropriate.) The women fell into two categories: 1) those who looked like the third-shift waitress at an out-of-the-way truck stop on a day when all of the scheduled third-shift waitresses called in sick and so one of them had to call a friend, who was substantively less attractive and personable than her, and 2) those who looked like The Baroness from GI Joe.

I am curious if anyone is upset by me being shallow and critiquing them based on their physical appearance. Will any feminists step forward and say "NO, SIR! Let us not judge these women by their bodies but instead by their truly monstrous spirits and abominable personalities?"

In the midst of all my stereotyping there were speeches. I sat through them, and I can say with most certainty that they don't bear repeating.

Then, the Nazis packed up their podium into a container that I pictured as the Arc of the Covenant. I realized I was wrong, but I was struck with one thought: WHY WASN'T THE COUNTER-PROTEST ORGANIZED WITH AN INDIANA JONES THEME? I mean, who defeats Nazis? And with style? Seriously. No clown ever killed a Nazi. (Not fact-checked. Please move on.)

Police escorted the Nazis out as the punks and clowns followed, screaming at them the whole way. Two apparently sexually flexible punks were offering free kisses to one of the Klansmen. To the best of my knowledge, this did not happen, but I would pay good money for the folks at Logo to develop a wacky sitcom based on it.

Block after block, as the police walked the neo-Nazis back to their vehicles, the shouting continued on both sides. The sad thing that everyone (neo-Nazis/punks/clowns) seemed to agree on was that the Charlotte-Mecklenburg Police Department officers on duty were doing a piss-poor job. People in the crowd screamed at the officers to arrest the people behind them. At one point I turned to the nearest police officer and said, "For what it's worth, thanks for the service you're out here providing." Apparently the First Amendment is a bitch no matter which side you're on. 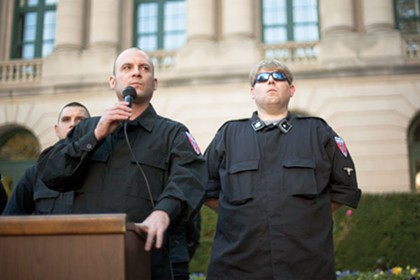 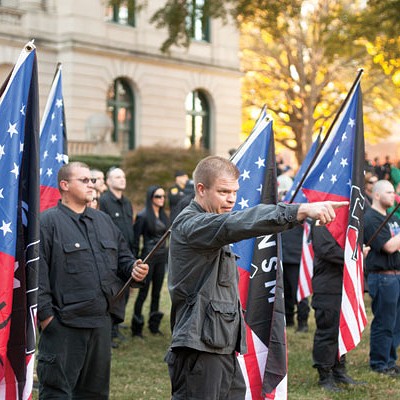 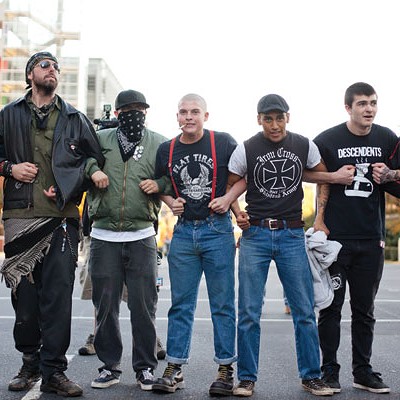 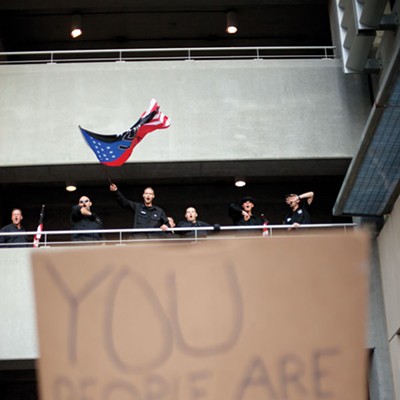