Sex and the Queen City Random.com

Have your pants ever been on fire? ... tell the truth.

I'll be honest: Though my pants have never actually been on fire, I have lied.

I was scheduled to work on a production for a show on USA filming here, starting early this Monday morning. But over the weekend, I was given an opportunity more important to me that would require me to quit this job, while the producer was traveling from L.A. to the East Coast. Not the most professional or polite thing to do, and normally I would have made up a lie to get out of it without looking bad or hindering this contact and connection.

But I figured it would be even more rude to lie, so I wrote him ... 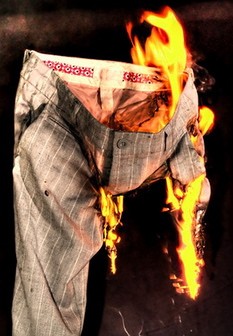 I want to tell you that I got some communicable disease, or that I need to get emergency surgery as that would be the only valid excuse for pulling out of the job last minute ... but that would be lying. Basically, I was offered a career and life-altering opportunity. But in order to actually attain it, I will have to leave town next week and thus not work on your job.

I am so, so sorry to do this to you, and I can only hope you can understand. I am as bummed about it as you are now inconvenienced.

Thanks Brittney, congrats on the opportunity and I do appreciate your honesty. I don’t get enough of that in L.A.

And the truth shall set you free (and not make you feel like such a bad person)!

This got me thinking about how often people use lies to repair the truth in order to avoid disappointing other people. How many excuses have you made up to get yourself out of something? Lying to parents, teachers, employers and the people we date to tell them what they want to hear, trying to paint the truth white with a lie. Sometimes lies have left my mouth before even filtering it, before my eyes could even gaze up to the right side of my brain to process the lie from the truth, making my lies believable, to even me.

That’s because the person I have lied to the most is myself.

I started doing that when I was growing up, to pretend things didn’t really happen. Playing make-believe in my head was the easiest way to deal with the truth of my reality. And as the Law of Attraction states, thoughts become things, so these little alternative realities I manifested in my head really did become my reality in ways. But I got so caught up with editing my realities that I didn’t know the difference between praying and lying to myself anymore. I then validated these lies in my head by saying them out loud and lying to other people.

But by editing my reality, my life became fiction. And ever since I’ve begun accepting and telling the truth, it’s become funny. But more importantly, it’s made me feel more real.

The truth will set you free. And sometimes you will be let free for telling the truth, but it's better than deepening the deception with lies. Lying may be effective and save your face once, but it always blows up in your face. Carrying a lie is as much a burden on your back as it is the person you're lying to.

Just tell your boyfriend or girlfriend the truth even if it hurts them, the truth will protect them more than a lie. Apologize to your employer or friend for the offense rather than make up some story. They'll forgive you, but once you lie to them, they can't trust you and your offense becomes unforgivable.

Even Honest Abe was lied to. Because people don’t spontaneously combust or their nose grow when they lie to us, it’s hard to filter truth from lies. But the least we can do is be honest with ourselves.

Living with a shitty reality is better than living a lie.