I haven't been able to get the coconut cream pie from Capital Grille out of my head since my first bite a few months ago.

Yes, it's been months that I've been dreaming about it. It was just so good. The shortbread-like crust was perfectly flaky and filled with cool, coconutty cream. Topped with mile-high whipped cream, it was a feast for the eyes. I housed most of the dessert before my friend suggested that I stop inhaling the pie and box it up for later. Party pooper.

After searching far and wide on the internet for the recipe, I still haven't been able to get my paws on Capital Grille's version of coconut cream pie.

... But I did find this Dorie Greenspan recipe for Toasted Coconut Custard Tart that comes very close to the coconut cream pie which dreams are made of. 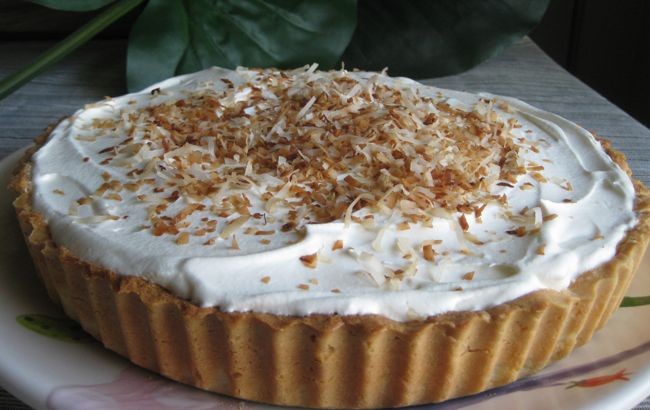 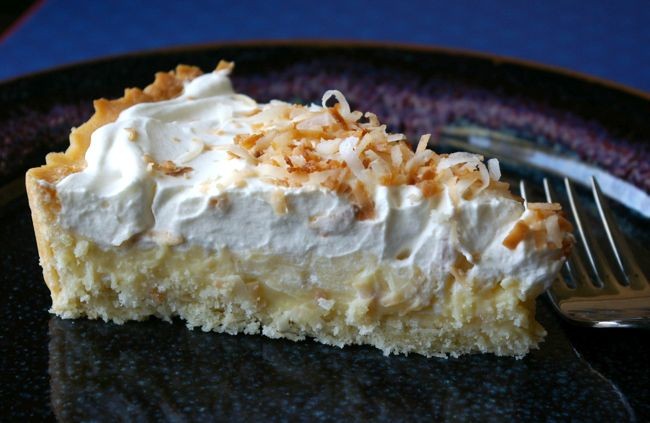 A sweet pastry tart shell is filled with a smooth vanilla rum custard that has toasted coconut flakes swirled in. It's then topped with lots of rum-spiked whipped cream and dressed up with more toasted coconut. Heaven on earth.

It's a three-step process to make, but worth it.

(Prior to tart assembly, reserving and eating some of the custard part with a spoon is highly recommended.)

P.S. Here's a pic of the coconut cream pie from Capital Grille. 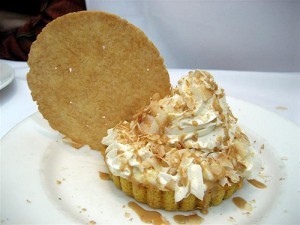 Baking: From My Home to Yours by Dorie Greenspan

shredded sweetened coconut, lightly toasted to top it off

Butter the bottom and sides of a 9-inch tart pan.

Mix the flour, powdered sugar and salt in a large bowl. Add the pieces of butter and pulse the ingredients using an electric mixer fitted with a paddle attachment. The flour should combine with the butter and begin forming small balls. In a bowl break up the egg yolk then add it in increments, mixing in pulses after each addition. Keep pulsing for 10 second each until the ingredients begin to mix. Mix until the ingredients could be formed into a ball of dough. Don’t over mix.

Using a floured surface, carefully knead the dough just enough to get all of the extra dry ingredients combined. Evenly, lightly press the dough into the bottom and sides of the tart pan. Reserve a small amount of the dough to repair cracks in the crust after baking. Freeze the crust for 30 minutes. Refrigerate the extra dough. Preheat the oven to 375 degrees F.

Butter the shiny side of aluminum foil and press the buttered side down against the crust. Bake on a baking sheet for 25 minutes. Remove the foil and press down the crust. Fill any cracks or thin spots with the extra dough. Bake for 8 more minutes until the crust is lightly brown. Let cool. Cover until ready to use.

Bring the milk to a soft boil. In a large saucepan whisk together the sugar, egg yolks, cornstarch and salt until well combined. While constantly whisking, pour 1/3 of the milk into the egg mixture. Continuing to whisk, slowly pour the remaining milk into the eggs. While still whisking, heat the mixture over medium heat until it begins to boil; let boil for up to 2 minutes, until it thickens. Mix in the rum and vanilla. Let it stand for 5 minutes. Then add the bits of butter. This should make the custard very smooth. Stir in the toasted coconut. Cover with plastic wrap pressed against the custard and cool in the refrigerator for at least 20 minutes. You can also store the custard overnight until ready to use.

With a stand mixer using the whisk attachment, whip the cream until it holds medium peaks. Add the powdered sugar and mix until firm peaks are formed, but be careful not to over mix. Fold in the rum and vanilla.

To put it all together, lightly whisk the cooled custard to loosen it and pour it into the crust. Spoon the whipped cream all over the tart and spread evenly to the edges. Sprinkle toasted coconut on top of the whipped cream.