These dinners are secret because seating is limited and the dinners occur under a veil of mystery. Diners aren't told what or where they will be eating, and often have to first pass through riddles or other gateways to get to their final destination.

I, along with twenty lucky Patron enthusiasts from the Charlotte area, took part in a very secret meal last night, Thursday, July 29, when Patron hosted a SDS dinner in Charlotte. By registering on Patron's website, guests were selected though a lottery system this past Tuesday to attend the free dinner. The selected people were contacted by phone Thursday afternoon and told to arrive at the Customshop restaurant at 7:15 pm.

Upon arrival, the only people greeting us were the waitstaff at Customshop. They seemed clueless as to what we were supposed to do next. They handed us a napkin with an address handwritten on it, and a computer-printed map to The Palmer Building.

With napkin and map in hand, we jumped in our cars and searched for our next destination. We arrived at The Palmer Building off of 7th Street and were welcomed into a dark reception area scattered with high-top tables with hazy liquid nitrogen centerpieces. Waiters floated around the room passing out "Sangrita" cocktails and hors d'oeuvres, which included cold cucumber gazpacho, eggplant caponata bruschetta, and grilled proscuitto wrapped figs stuffed with mascarpone.

Finally after 30-40 minutes of slight confusion as to what was to happen next, the Patron representatives introduced Chef Brett Mckee, of Oak Steakhouse and 17 North Roadside Kitchen fame (and who is opening 15 North in Charlotte next month), and mixologist Chip Townsend, from Customshop, who were creating the delightful dishes and cocktails for the night.

At dinner time, black curtains were drawn back and we were ushered into the dining area. Name cards for each guest were set at the candle-lit linen-covered banquet tables. The event looked as elaborate as a wedding banquet. Impressive. The spectacular dinner consisted of four courses and cocktails:

As you can see from the menu, we all ate and drank a lot ... probably too much. But what can you do when the food and drink is so good? Luckily, I didn't need to utilize the "transportation service" that Patron had so considerately arranged for guests.

To get in on future Patron Secret Dining Society events and news, check out patronsocialclub.com. 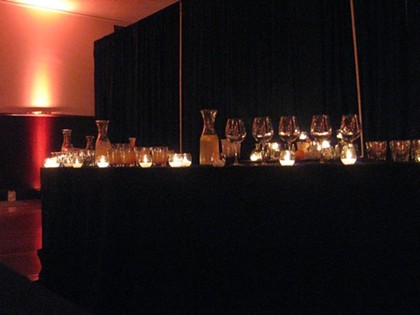 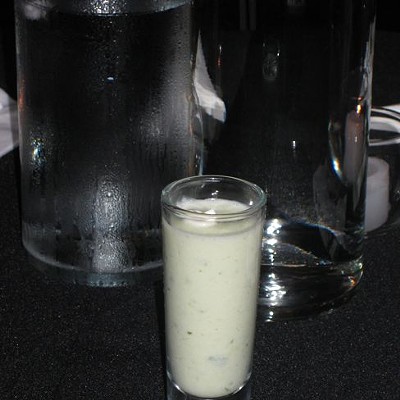