The Charlotte Planning Department utilized group polling technology for the first time during the third of five planned Citizen Advisory Group meetings, held Tuesday night. It was another step in a lengthy process meant to revise zoning ordinances for restaurants and nightclubs.

Department staffers distributed remote key pads to about 35 business owners, concerned citizens and members of the local music industry to help gather "yes" or "no" answers to questions regarding the city's current zoning ordinances. The questions, based on issues raised by the group at a similar meeting in February, covered whether the size of an establishment, zoning districts, and hours of operation should be taken into consideration when branding a venue a "restaurant, "bar" or "nightclub." 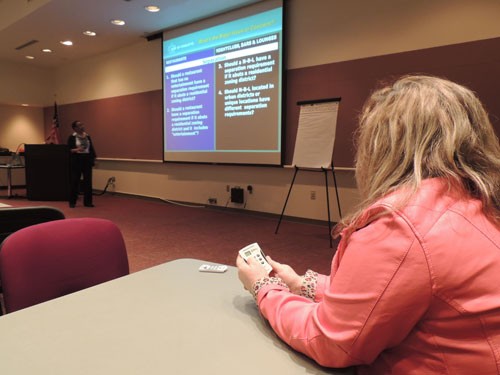 Poll results showed a majority believed that definitions should not be based on an establishment's size, and almost 90 percent agreed that businesses should all be defined the same. Information collected at this and other scheduled meetings will go to City Council in June.

Current zoning ordinances restrict businesses from operating as nightclubs within 400 feet of a residential area. But the definitions of "restaurants" and "nightclubs," written in 1980, have proven problematic, since both often apply to a business. Code-enforcement supervisor Mark Fowler admitted at Tuesday's meeting that most of the 29 violations of the 400-foot separation ordinance in the past decade came down to zoning-enforcement officials entering a restaurant and deciding whether they felt as if they were in a "nightclub atmosphere." The city stopped enforcing the 400-foot ordinance in early 2011 after public concern was raised.

The polling produced concrete results, a rarity at past meetings. But concerned citizens used Tuesday's meeting, as they have others, to address issues they say weren't remedied by the noise ordinances were created in 2011. That year, the city restricted decibel levels of music and other forms of entertainment after a certain time of night. The planning department is only concerned with land usage, i.e., definitions of businesses.

"It's not about the definition of a bar or a club or a lounge or whatever," a NoDa resident who refused to give her name said to the crowd. "It's about how [those establishments] are insulated so that someone living above or around them can live in harmony. If you're going to have a club, take responsibility, respect the people in your community, and insulate."

She went on to describe how she has been struggling with issues in her neighborhood for three years without the city's help.

"NoDa was an arts district when I moved there," she said. "Now it's a bar district ... all about getting drunk and hanging out until 3 in the morning. You can't sleep if you have a normal job."

Others argued that bar owners should not be held responsible for disturbances — that police should do a better job of cracking down on fights or drunkenness.

Andy Kastanas, a local business owner, worries that restricting how restaurants are allowed to entertain their guests could put some of them out of business, since many turn into bars later in the evening.

"People who move into these districts know what they are there for," Kastanas said. "They want to be in a vibrant area where there are restaurants and there are options. People who go to those areas want that, and that's why those areas are growing and developing. Now if you restrict those areas, we are making a bigger mistake by destroying the cultural fiber of those districts."

After Tuesday meeting, Rob Nixon, owner of Jackalope Jack's, presented Campbell with two pages of his suggestions for City Council, based on the idea that any establishment that sells a ratio of 30 percent food, 70 percent alcohol — how North Carolina ABC defines a restaurant — should be given an "entertainment business license," allowing them provide entertainment as long as they adhere to the present city noise ordinance.

These restaurants would be allowed to provide any form of entertainment, including legal gambling machines, live trivia, karaoke, televisions, DJs, jukeboxes and live bands, as long as they follow the noise ordinances already in place. He believes these restaurants should be no less than 50 feet away from a residence.

"Charlotte is a 24-hour city," said Nixon. "We have a huge work force that is out working at all hours. These people, whether it's janitors or hospital workers or whatever, are working 24 hours to provide a service. So should we. We should create a new definition and mix restaurants and bars and nightclubs all together and just make them follow the laws."