No Waffling at Cast Iron

Little attention is given to Belgian cuisine. Americans call fries French, but in truth, they are Belgian. In fact, friteries — restaurants that sell fries, or frites, with a wide selection of sauces — are among the most popular fast-food depots in Belgium. The Swiss are given credit for chocolate, yet the chocolatiers in Belgium are among the best in the world. (My favorite is Pierre Marcolini.) Some Belgian foods are commonly known: lambic, a distinctive type Belgian beer, and carbonade, a beef stew made with beer.

The most misunderstood gastronomic contribution of the Belgians, however, is their waffle. Here in the U.S., we have three varieties of waffles: frozen, nonfrozen, and those served with fried chicken and drowned in maple syrup.

But the waffle started life during the Middle Ages in Belgium as crispy wafers sold by street vendors. In Belgium, two styles of waffles exist: the rectangular Belgian waffle with a yeast-leavened batter that arrived in the U.S. during the 1964 New York World's Fair, and the sweeter Liège waffle, based on brioche dough. The latter is the most common and most popular waffle found in Belgium and throughout Europe.

Now the Liège waffle is here, too.

Krista and Chris Duggan opened Cast Iron Waffles in south Charlotte in October 2010. The native Nebraskans chose to relocate to Charlotte for several reasons, including the better climate, educational opportunities for their five children, and to open this waffle shop. The Duggans had looked into buying a franchise, but decided to create a franchisable idea instead.

"This concept is very popular in Europe. We hope it will be as popular here," Krista says.

Cast Iron is a tiny, bustling café in which the owners have used their backgrounds to bring appealing new flavor to this staid archetype. The coffee drinks run the line from latte to macchiato. The coffee is fair trade. Smoothies share space with teas on the roster. But the draw is the Liège waffles, and these hold universal charm. From kids and soccer moms to couples and retirees, customers come for these certifiably addicting waffles.

The dishes mingle in-season farmers-market fruits with a fancy Continental technique. Liège waffles are not the cloyingly sweet kind you find at pancake houses, although sugar does play a key role. The Duggans import Belgian pearl sugar, a compacted sugar that caramelizes with direct heat, forming a luscious crust.

Cast Iron's toppings include fresh whipped cream, maple butter, Nutella and fresh fruits. One of the more popular waffles features a mix of pureed berries. Another has sliced kiwi, bananas, Nutella and whipped cream. Prices range from $3 to $4.25. 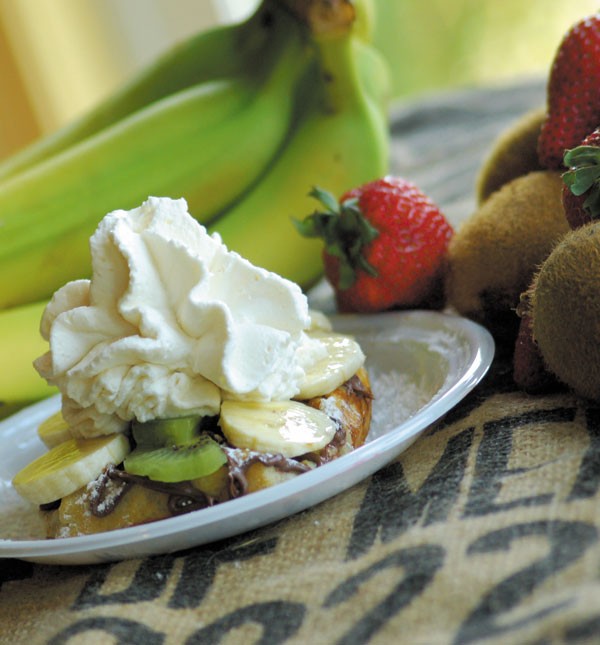 Krista Duggan makes all of the dough in-house. On some baking days, the shop tweets specials. A set of a dozen "naked" waffles individually packaged retails for $28, but on sale is $20. The Duggans offer other specials on Facebook, and text coupons to their customers.

The couple plans to expand their concept by opening other locations in Charlotte and selling waffles wholesale. But for now, just stepping into the Cast Iron can be a heartwarming experience. Krista tells stories of customers discovering her shop. "One woman rushed in, explained how she had been missing Liège waffles — she's European — and bought two waffles to go," she says. "A few minutes later she returned, saying she ate both waffles before she even started her car."

Once you've had a Cast Iron waffle, you'll be back, too.