Local blends hip-hop influences into a style of his own 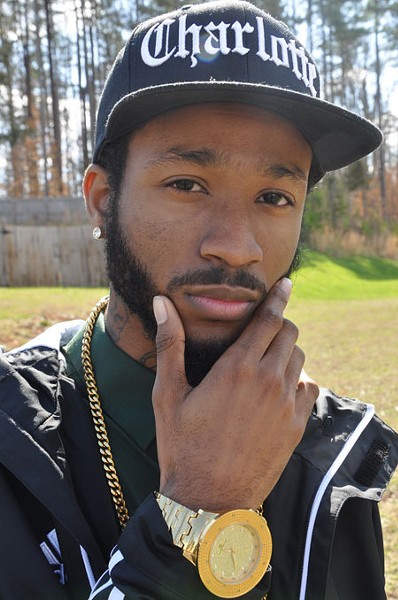 The year 2012 has seen homegrown rapper Lute — born Luther Nicholson — make national noise, but he's not living off his music just yet, and the garden center at a local Walmart beckons. That's where Lute works.

The realization is humbling. Lute's popular mixtape West1996 may not have changed his lot in life overnight, but it put the rapper — who grew up on Southwest Boulevard, deep in Charlotte's west side — well on his way. His name is now a fixture on national music blogs — 2DopeBoyz, Complex Magazine, Sputnik Music — behind music that recalls a bygone era in hip-hop for which the 23-year-old was barely alive.

Lute says he's always walked to a different beat. "I stuck out because I didn't do everything that all my other friends did, and I didn't do anything like my cousins and them did, but I watched everything around me," Lute says. "I watched how things were."

By 13, he'd begun hanging out on the streets of west-side Charlotte; a move to the suburbs near Hornet's Nest Park soon followed. His older brother, Derrick Miller, had just gotten out of the military and the family used the money he had saved to relocate.

Growing up without a dad, Lute's older brothers — Derrick, 42, and Shawn, 35 — were father figures to him. And much like a father would pass down his tastes and worldview, his brothers gave Lute a treasure trove of music from hip-hop's golden era.

"When my brother went to the military, he made me guard all his CDs and keep a lookout for them, so I rambled through them things," Lute says. He began pairing the Bone Thugs 'N Harmony, Three 6 Mafia, Project Pat and Pastor Troy he heard among his peers with the Nas, Kurtis Blow and Afrika Bambaataa CDs in Derrick's collection.

Lute started rapping when he was in eighth grade and met rapper Jimmy Kelso two years after moving to the suburbs. Kelso, too, was a west-side transplant to the suburbs. They formed the group Teen Starz in high school.

After rolling as a crew for a while and doing talent shows, Teen Starz fizzled out, but not before people heard Lute's potential. The rapper points to 2008 as the year he realized he had something going with rap, but as time passed he noticed himself sounding like J. Cole. So he went back to the lab to avoid anyone saying he was piggybacking off the North Carolina-born MC's flow and success.

"I was like 'Hey bruh, where those old CDs at?'" Lute says. Digging through the music that first inspired him, Lute released his first solo project, The Road to Southwest Boulevard, on Facebook. "I dropped it and it flopped," he says. "After that I was just like, 'Fuck it, I'm not gon' drop nothing.'"

In hindsight, the rapper admits the project wasn't ready. "I knew I had something to say that people could relate to," Lute says. "Maybe we just gotta rethink this; let's just do something a little more real."

West1996 was take two. The mixtape thrust Lute and his ForeverFC camp — him and Kelso along with fellow rappers Schyler Chaise and Ry — into the national hip-hop conversation and overseas music libraries quicker than any of them could have imagined. The collective's path to underground fame bucked the usual blueprint; they were known online before many in Charlotte had heard their music, and before they'd ever performed any of it live.

Balancing a blossoming music and business career with his day job hasn't spun Lute out of control yet, but his ForeverFC crew definitely has an eye on touring more in the next year. "We're just taking it a day at a time, just seeing where it goes," Lute says. "By this time next year, I want to be able to perform at [Atlanta-based hip-hop festival] A3C or South by Southwest. I want to do bigger shows."

While he gets his stage reps up, Lute's still punching the clock, with the assurance that he's on his way. "I know my city's behind me now, so it's time to go at it," he says. "It's time to get our recognition and I'ma go for it. I'ma go for it all."