Facing off for Iron Fork

On March 19, five of Charlotte's top chefs will compete in Creative Loafing's second annual culinary competition Iron Fork. Our readers voted for their favorite local chefs during a nomination period, and the five with the most votes made the cut to participate in the fight for the prestigious Golden Fork.

Guests of the event will not only see a sizzling competition, but will enjoy cocktails and samples from local restaurants. For more info on the event, visit www.clclt.com/events.

Now, let's meet the chefs whose culinary prowess earned them a spot in the foodie fray.

His edge: "I am bringing Brent Martin; he's, like, another me, if not better."

Theme song: "I Can't Go for That" by Hall and Oates

To the competition, he says: "Losers buy the first four rounds!"

Her edge: "I have worked as a pastry chef as well as a vegetarian chef; I believe my diverse background gives me an edge."

Theme song: "Baba O'Riley" by the Who

To the competition, she says: "I respect all of you and I'm so excited to compete. Let's put on a great show!" 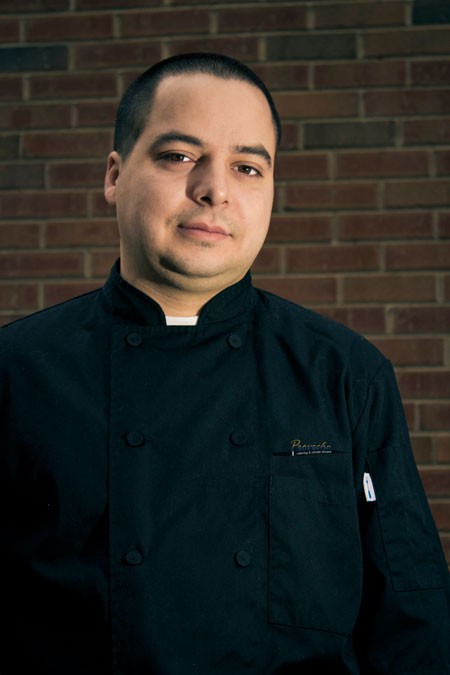 Aaron Rivera of The Chrome Toaster

His edge: "The only for certain thing I can say I am bringing that no one else is would be my sous chef Jordan Anthony Nelson."

Battle cry: "Battle cries should be left to the heroes, soldiers that protect and defend our country."

To the competition, he says: "Good luck, let's have fun, show what Charlotte chefs are made of, and let's have drinks afterwards!"

His edge: "We are bringing something outside the box: molecular gastronomy, a new way of cooking."

What he learned from last year: "I believe that some advantages of this being my second year competing are knowing the layout of the pantry, how the competition was set up in regards to timing and how close my competitors were to me while cooking."

The Sopranos theme song, or maybe the Godfather song, because I'm Italian."

To the competition, he says: "Get ready, we're going to bring something different to this battle."

His edge: "Extra weight and a back-up plan."

What he learned from last year: "Honestly, watching chef Geoff and chef Brent set up and execute the winning dish. They were right next to me on stage last year, and I took notice of how organized they were. I also know that having a few ideas of dishes to prepare will help so we aren't creating something on the spot."

Battle cry: "Born to bleed, fighting to succeed, built to endure what this world throws at me."

To the competition, he says: "Shots after we battle!"