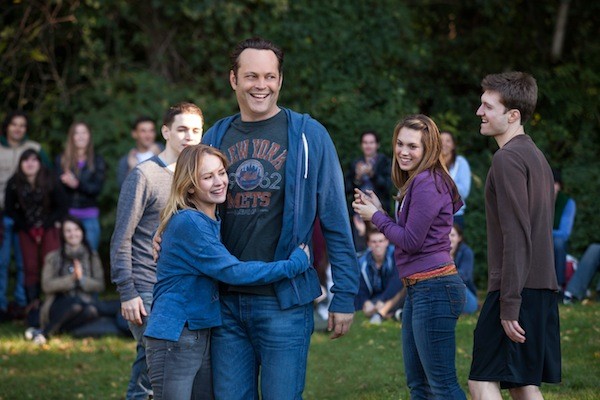 Flaccid as a comedy and even more limp as a heart-warmer, Delivery Man stars Vince Vaughn as David, an irresponsible guy who's a disappointment to both his father (Andrzej Blumenfeld) and his pregnant girlfriend (Cobie Smulders). Working as the delivery truck driver for the family meat business, he's shocked to learn that all those hundreds of anonymous sperm donations he gave back in the 1990s have resulted in 533 children — and 142 of them have filed a lawsuit against the clinic in an attempt to learn the identity of their father. Brett (Chris Pratt), David's lawyer and best friend, urges his client to lay low until he can file a countersuit, but finally sensing an opportunity to add meaning to his life, David instead assigns himself the role of guardian angel, injecting himself into the lives of these now-grown kids while keeping his identity hidden. This leads to countless vignettes of wavering mediocrity, including David helping one son (Jack Reynor) become an actor (the corniness of this sequence recalls the line from 1933's 42nd Street, "You're going out a youngster but you've got to come back a star!") and persuading one daughter (Charlotte-born Britt Robertson) to kick her heroin addiction (which she does in less time than it takes to brush one's teeth; wow, who knew it was so easy?).

Delivery Man is a remake of 2011's Starbuck, with that film's writer-director, Ken Scott, assuming the same positions here; I haven't seen that picture, but surely it must contain more humor and heart than the synthetic slop presented here. Pratt scores the only laughs as the perpetually fatigued father of four, but stripped of the wise-guy patter and confident swagger that have been his strong suits in comedies as diverse as Swingers and The Internship, Vaughn proves to be a dull leading man, shooting blanks in a feeble attempt to arouse audience sympathy.