The Internship / This Is the End: Hip to be square | Reviews | Creative Loafing Charlotte

The Internship / This Is the End: Hip to be square 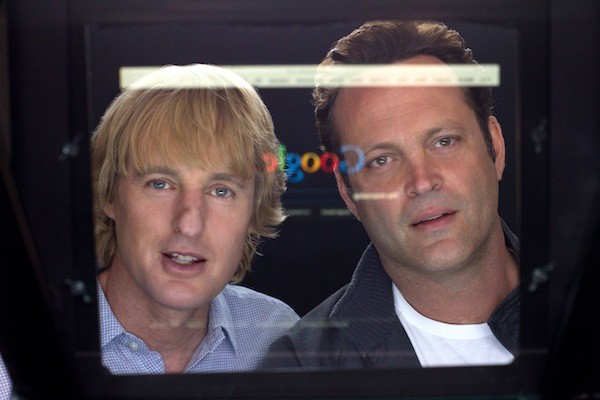 Just this past week, my wife forwarded me a pair of hilarious cartoon strips titled Patriarchal Action Movie and Patriarchal Action Movie 2. In the first, the hunky male spends every panel declaring (with either girl or gun in hand), "I Am Heterosexual!"; in the second, he busts the same moves while shouting, "I Have A Penis!" During the summer of 2013, this m.o. won't be confined to action flicks: With the exception of the Sandra Bullock-Melissa McCarthy vehicle The Heat, all of the season's mainstream comedies will be working from this same template, with two or more guys commanding the screen, the salaries and the above-the-title billing. 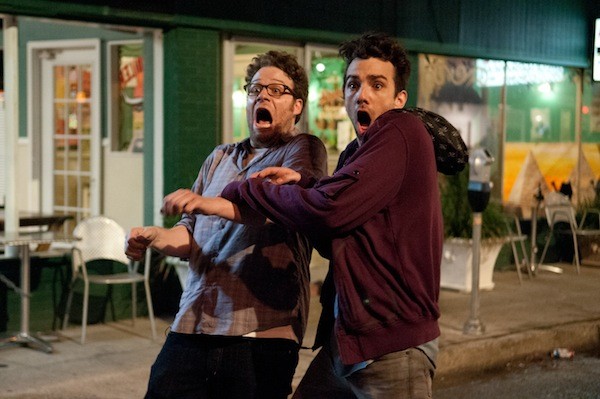 Two such examples hit theaters within days of each other: The Internship, reuniting Wedding Crashers stars Vince Vaughn and Owen Wilson, and This Is the End, featuring same-circle friends James Franco, Seth Rogen, Jonah Hill and many more. Clearly, This Is the End is the film with all the cool street cred: It's rated R, it's fearless in dishing out its bawdy humor, it cleverly finds its actors playing fictionalized versions of themselves, and it's from the makers of such youth faves as Superbad and Pineapple Express. By comparison, The Internship feels a little too conservative, a little too old-school — it's the Matlock to This Is the End's Breaking Bad. Unlike the raunchy Wedding Crashers, it's rated PG-13 instead of R, it avoids the strain of mean-spiritedness that's in vogue in modern comedy, and its leads are now more comfortable making jokes about 1953's Stalag 17 and 1983's Flashdance than anything from the brave new world of 2013. This Is the End is probably the safer blanket recommendation to make — as the final punctuation mark, it even contains more big laughs — and yet I was ultimately more satisfied with The Internship. 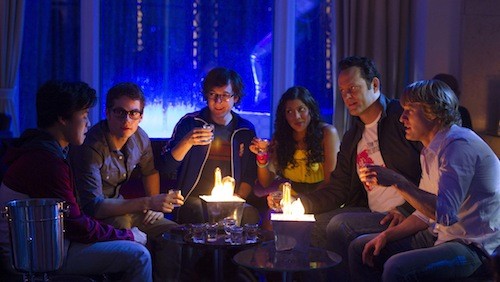 Certainly, a lot of that has to do with the chemistry between Vince Vaughn and Owen Wilson. Here, they're respectively cast as Billy and Nick, two watch salesmen who unexpectedly find themselves out of work after their boss (John Goodman) shuts down his business (reasoning that everyone now checks for the time on their iPhones and such). Nick briefly finds employment at a mattress store (cue yet another tiresome cameo by Will Ferrell), but he's quickly talked by Billy into dropping that gig and joining him in an attempt to land internships at Google headquarters (aka The Googleplex) in California. They manage to get their feet through the door, but they now find themselves competing with numerous other interns for permanent positions — and unlike them, the other recruits are college kids who eat, drink and breathe computers.

The Internship is conventional in the ways one would expect: A longtime Google employer (Rose Byrne) initially resists Nick's flirtations but eventually falls for him; one intern (Max Minghella) mentally bullies everyone around him, especially the "old guys"; and Billy and Nick find themselves hanging out with the youthful rejects. Yet the script by Vaughn and Jared Stern smartly addresses the generation gap without making fun of either side: There's something to be said for the work ethic of these students who acknowledge the harsh realities of contemporary career-building, but there's also much to learn from the easygoing attitudes of people who grew up in a time before every baby is automatically handed an iPod the minute it pops out of the womb. What's more, Vaughn as both writer and co-star generously gives the younger performers in the cast room to maneuver, and even with sketched-in characters, this allows all of them to make positive impressions. Of course, the two stars still get the lion's share of the choice quips, but that's OK: They're both on their game, and it's their ingratiating ways with a line that keeps the humor percolating. Aside from an uproarious scene involving Professor Charles Xavier (yes, that Professor X), the laughs are mostly low-key — but at least they're there, which automatically places this above many guffaw-free films of its genre. 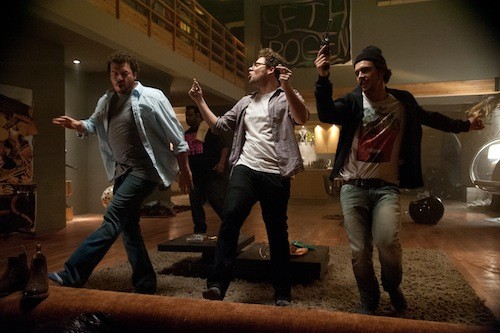 While the PG-13 The Internship traffics in gentle humor, This Is the End repeatedly hits for the outskirts of the R-rated fence — and it scores an awful lot of the time. It starts with Jay Baruchel (playing Jay Baruchel) visiting Seth Rogen (playing Seth Rogen; see the pattern?) in LA in the hopes of spending some quality one-on-one time getting high and playing video games with his friend. Instead, Seth drags Jay to a party at James Franco's house, a loud and boisterous event where the guests include Michael Cera (revealed as a sex fiend), Jason Segel, Paul Rudd and other Apatow-endorsed comics. But what starts off as a typical Hollywood evening turns both cryptic and apocalyptic when the earth opens up and begins swallowing some people while others are whisked into the sky. Is it End of Days? The few remaining survivors — among them James, Jay, Seth, Jonah Hill and Craig Robinson — aren't sure, but they do know that they need to board up the house and ration the supplies if they hope to hang around long enough to find out.

The moments of comic gold are sometimes diluted by considerable stretches of tedium, generally occurring when writer-directors Evan Goldberg and Rogen (adapting Jason Stone's short film Jay and Seth vs. the Apocalypse) and their improvising actors refuse to end scenes and instead carry them past the point of comedic no-return. Clearly, these are all performers who are in love with themselves, which is fine except that it makes the movie a rather insular experience. At one point, it seems that Emma Watson will rack up considerable screen time, and we eagerly anticipate seeing the Harry Potter franchise player bring a dash of girl power to this boys' club. But no, her appearance is more limited than expected, as if these guys were completely unequipped to write female characters (even with Ms. Watson's presumed assistance). Instead, it's Danny McBride who's late to the party (in both senses of the phrase) and then allowed to hang around. Look, I'll come clean and admit that, for me, a little McBride goes a loooong way, so if you think he's a modern equivalent to Chaplin or even Belushi, then raise my rating a full star. But aside from a few moments, his presence harms the picture, particularly in an interminable sequence in which his discussion of how he likes to shoot his wad all over the place seemingly runs as long as two Super Bowls aired back to back.

If there's one area in which This Is the End handily trumps The Internship, it's in the cameos. As noted, The Internship offers only Ferrell. I won't reveal the ones from This Is the End, but they're a treat — and only a little less unexpected than if Barack Obama and John Boehner had elected to grace the shoot.