To quote a character in Poltergeist II: The Other Side, "They're baaaaaack!" Not that we ever doubted their return at any point.

When Eben McGarr and Joe Moe brought the inaugural Mad Monster Party to Charlotte in March 2012, the pair insisted that this wasn't just a one-off deal; rather, they had diligently researched the city, the market and the horror-hungry demographic before deciding that the Queen City could effectively be turned into the Scream Queen City. And their instincts proved sound.

"At last year's shindig, there were just over 4,000 shindiggers in attendance," says Moe, who, along with McGarr, not only created this event but also the Mad Monster magazine from which it sprang. "Locals seemed hungry for a horror convention — ravenous, in fact. And our die-hard horror community of fans flew in from all over the world to support the show, too. They had a great time and promise to be back this month. We're well on our way to making Charlotte our second tomb."

It's safe to say it exceeded the expectations of most attendants as well. As if the celebrities and vendors weren't enough to keep patrons occupied, there were also movie screenings, panel discussions and such unique creations as "Scaraoke!" (a frightful take on karaoke) and the Miss Horrorlina Pageant. If there were any gaps in the entertainment, nobody noticed.

"Eben always shoots high," states Moe. "We plan so much programming that nobody would ever know there was anything missing. And anything that doesn't make it gives us time to refine and present it in the next show. Hey, that means this show!"

Eben is only too happy to reveal some of the new attractions on tap this year. "After seeing how fans loved last year's live Spook Show and Crypt Critters exhibit, we decided to go big this year," he states. "We're bringing Rob Zabrecky, the Academy of Magical Arts' Magician of the Year, all the way from the Hollywood Magic Castle. Rob is considered among the best of the best. The Silver Scream Spook Show will also be doing a special kaiju-themed act [featuring giant monsters], where they will resurrect the ghost of King Kong live on stage. The Crypt Critters exhibit will feature even more aggressive arachnids, intense insects and slithering serpents sponsored by Cold Blooded Encounters. And thanks to Charlotte's own Back Alley Film Series, Mad Monster Party will present the regional premiere of IFC Midnight's new film Maniac, starring Elijah Wood.

"The main attraction, in my opinion, is the exhibitor room," Eben continues. "We have the best horror artists and monster memorabilia merchants with stuff you really can't buy anywhere else. This year, vendors and artists are preparing limited edition Mad Monster Party merchandise only available at our show, on a first-come, first-served basis. Any fan attending should budget for all the cool items they're going to see in the dealer room because you'll never see some of these things for sale again."

If there's one event that personally has me the most excited, it would be the one focusing exclusively on the classic film Jaws.

"Our Jaws presentation is going to be pretty spectacular," enthuses McGarr. "Carl Gottlieb [who co-wrote the script and played the role of Meadows], Jeffrey Kramer [who portrayed Deputy Hendricks] and Joe Alves [the film's production designer] have prepared a show that will premiere in Charlotte; I can't even call it a 'panel.' They're considering taking it on tour, so you'll see it at Mad Monster first! We'll also have the world's largest collection of screen-used Jaws props and memorabilia on exhibit, including the original shark cage, Richard Dreyfuss' dive suit, the corpse of Ben Gardner and much more."

AS ANY WELL-SCHOOLED horror fan knows, the late Forrest J Ackerman was the long-time editor of Famous Monsters of Filmland, the magazine that counted among its disciples such luminaries as Steven Spielberg, Stephen King and Peter Jackson (as well as mere mortals like a certain Creative Loafing film editor). Moe, who was Ackerman's best friend and caretaker during the last years of his life (he passed away in 2008, at the age of 92), made sure to include an "Uncle Forry Tribute" in the first Mad Monster Party, and he plans to offer another such panel discussion this year. Moderated by writer-director-producer Terry Pace (another close friend of Ackerman's), the panel will include Moe, Metallica guitarist (and horror aficionado) Kirk Hammett, Skinny Puppy vocalist Nivek Ogre (ditto) and me. 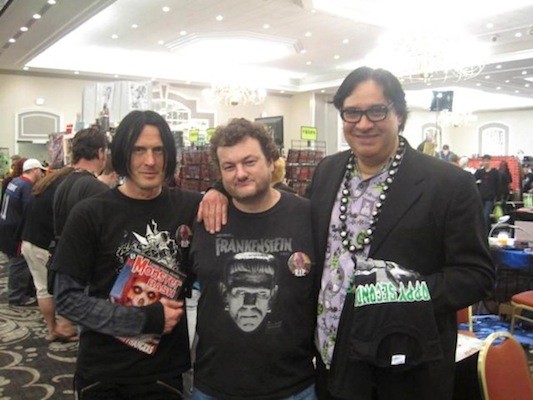 "As you know, Matt, Forry Ackerman is our common mentor, and we try to instill his spirit in the whole effort," says Moe. "The Forrest J Ackerman tribute panel is one that I'm really looking forward to. Without Forry, none of us would know each other."

Even with all of these attractions that will threaten to bust out from the confines of the Blake Hotel, the main selling point for many attendees will be the opportunity to snag photos and autographs of their favorite celebrities. (Keep in mind that the celebrities do charge per autograph/photo, in the general range of $20-$30.) Bruce Campbell, the star of The Evil Dead and its sequels, is arguably the biggest draw, although some might argue that the honor belongs to someone known less as himself and more for the famous monster he played in 12 movies.

"Haruo Nakajima, the original Godzilla, is making an incredibly rare U.S. appearance," notes McGarr. "He's coming all the way from Japan to meet his fans at Mad Monster Party. Haruo is 84 years old and this is his only currently scheduled U.S. appearance." (For a list of some of the other notable celebrities on hand, see below.)

McGarr and Moe expect attendance at this year's Mad Monster Party to surpass even the heady numbers from last year ("The more, the scarier!" quips Moe). Regardless, we can probably go ahead and mentally prepare for another monster mash in 2014, especially since the pair have become accustomed to Charlotte.

"Last year, our primary goal was putting on a good show," says Moe. "This year, our goal will have to include visiting all the incredible friends we've made here."

And In This Cobwebbed Corner ...

Over 40 celebrities are currently scheduled to appear during the three-day run of Mad Monster Party. You can go to the website at www.themadmonsterparty.com to see the complete list; in the meantime, here are 10 noteworthy figures in attendance.

Wendy Leech — Stuntwoman (and wife of Vic Armstrong, above); Star Wars (as C-3PO!), The Omen, Total Recall, Krull, Legend, many more. (UPDATE: It's been reported that Wendy Leech will unfortunately not be able to attend the event.)

Linnea Quigley — Actress; Night of the Demons, The Return of the Living Dead, Sorority Babes in the Slimeball Bowl-O-Rama, Hollywood Chainsaw Hookers.

Lea Thompson — Actress; the Back to the Future trilogy; Jaws 3-D, Howard the Duck, SpaceCamp.