Paper or plastic are not the only choices confronting grocery shoppers each day in Charlotte. Where to shop is also a choice. 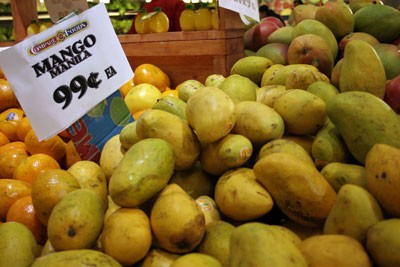 Most people are territorial and finicky when it comes to food. They tend to shop at the local market -- the store closest to their neighborhood -- and the primary decision is made due to either price or quality. When "that" store is found, shoppers tend to return to it again and again ... only adding a monthly or bimonthly run out of their neighborhood to stock up on specific items exclusively found elsewhere.

Over the years Charlotte has seen a parade of grocers. When Hannaford Supermarkets, headquartered in Maine, showed up briefly, I stocked up on their pickled fiddleneck ferns and imported Italian arborio rice. Other regional and local grocers have departed or quit the game: A&P, Winn Dixie, Kroger, Colonial, Big Star, Piggly Wiggly, Pender's, Dixie Home, and Funderburks. (Bi Lo's parent company Lone Star recently announced the sale of Bi Lo, which owns 230 stores in the Carolina, Tennessee, and Georgia.) Even taking these disappearing stores into account, however, a ton of markets are still open for business in and around the area.

Recently, I visited a number local grocery stores stretching from Ballantyne to downtown -- from flagship stores to smaller specialty markets; I was on a mission to find out what was good about -- or lacking in -- Charlotte's grocery stores.

Now, until this close examination (fortunately no one thought it odd I scribbled in a notebook as I scoured the stores), I thought of grocery stores as formulaic, almost stagnant. But that perception was deceiving; like looking at a calm sea not realizing the vibrancy beneath the surface.

What makes a store good? What I found was food quality and variety are not enhanced by ambient lighting or music or even a knowledgeable staff. If a fish tastes of the ocean and that specialty dressing resonates with love-it-in-an-instant flavor, then the store buyers and warehouses are doing a good job. Do I wish Harrods Food Hall could be plunked somewhere in Charlotte (preferably walking distance from me)? Sure I do. But frankly those complaints are tiresome. OK, so Charlotte doesn't exactly have any markets like those on Rue Cler in Paris' 7th arrondissement. If you want that, then catch a flight to France.

That said, this is my take on what a handful of Charlotte's grocery stores have to offer:

When the Morrocroft Harris Teeter, also known by locals as the "Taj MaTeeter," opened, it clearly set a new standard for Charlotte grocery stores. The company, which is headquartered in Matthews, had consolidated two SouthPark locations to build this state-of-the-art market.

But, the Taj MaTeeter is more than a supermarket: Not surprisingly, given the neighborhood, this Teeter is a meeting place. Customers push carts to the side to chat and catch up. The prepared food area takes a sizeable amount of total floor space and has both La Brea and HT baked breads finished on site, a ready-made dessert area, a sushi station, rotisserie chicken, a sub station, salad bar and a hot food buffet offering breakfast, lunch and dinner. The Taj also features a large, staffed wine department. On the other side of the store are the meats -- HT Rancher brand, Smart chickens -- and a seafood department that carries mussels, clams, lobsters, shrimp (farm and wild) and a decent selection of fins.

With more than 100 stores in the Carolinas and Virginia, Lowes Foods has garnered a reputation for carrying some of the best produce in the area. A large portion of this produce is organic, and the selection is deep. The pear section, for example, has varieties like comice, Asian, forell, bosc, red, barlette and d'Anjou. Also in produce are Glory's bags of pre-washed and de-stemmed collards and turnips. 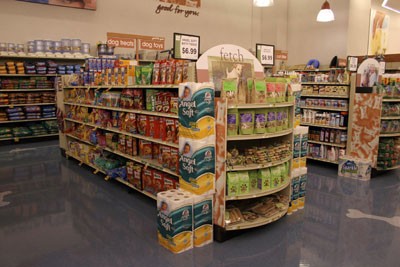 The pet section alone is worthy of a go; not only do they carry food, but they also stock toys, treats and sanitary equipment. Driving a cart through Lowes' wide aisles is a pleasure, and the products are attractively displayed. The organic cereals are located on the same aisle as the regular cereals, and the freezer section sports a labeled "Kosher" area.