Burn it all down

Local singer and producer Matt Hylom went to work this Labor Day weekend, dropping a moody visual for his song "Headspace," the first single since the release of his 2017 EP, Uncommon.

The Long Island native is seen in the dark video going through a time of reflection, sending emotional texts in someone's direction before lighting a fire and watching it burn. Hylom smokes a cigarette while singing about his insecurities: “I’m neck deep trying to stay afloat, ‘cause I’m making failed decisions left and right ... ‘cause I’ve been in and out of jobs like confessionals. Unprofessional. Late to work again from sipping on the ethanol." 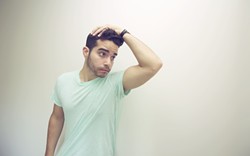 Hylom said the song is about finding the strength to get back up after experiencing defeat or failure.

"'Headspace' is a song about making mistakes, and getting into the mental state of being willing to try again, despite the odds," Hylom stated in a press release announcing the video. "The art is a target, which harkens back to the line ‘I missed the mark trying to find my place.' ... When you realize you’ve made missteps or missed the mark, you can either sit around and complain about it, or try to learn from your mistakes, and take another shot."