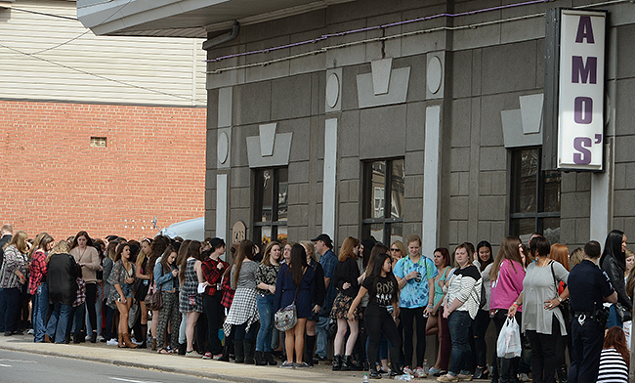 Charlotte music fans who have been missing all those great metal bands and tribute acts that Amos' Southend once brought over to South Tryon Street are in for a treat.

Amos' Southend will return to a smaller section of its old haunt, most likely by early January, according to owner John Ellison.

Last May, Ellison closed Amos', and earlier this year moved his Gin Mill bar and restaurant from next door into the old Amos' building, expanding it with a rooftop patio and other bells and whistles.

Ellison closed the popular music venue due to limited parking after the Railyard offices, shops and apartment building took over Amos' old parking area across the street. But when members of Beacon Partners, the developers of the Railyard project, held a get-together at the Gin Mill recently, they told Ellison of their plans to make a paid parking deck available to the public.

"I was talking to one of the guys and he said, 'We're putting a parking deck in there and it's going to be paid parking for the public after 5 p.m.," Ellison said. "I was like, 'Damn, I wish I'd known that before.' But actually, I couldn't have kept Amos' empty for a year and half without parking anyway."

The new Amos' will be smaller — a capacity of 750 as opposed to the 1,300 capacity in the old room — and it will occupy a back area of the current Gin Mill.

"The landlord was having a hard time finding a suitable tenant to go back in the back, and people kept saying to me, 'Why don't you put a smaller version of Amos' back there," Ellison said. "So I thought, hell, why not? [laughs] I don't have enough headaches in my life right now anyway."

Ellison said he's already talked with AEG Presents, a booking agency Amos' worked with over the years, and will be reaching out again to tribute bands, up-and-coming national acts, local artists and oddball shows like midget wrestling.

"Obviously I won't be able to get in some of the bigger acts that I got, but we'll still be doing a lot of the stuff we did before, just on a smaller scale."

One promoter who is thrilled to see the return of Amos’ Southend is Nickel & Dime Entertainment's Brad Brady, who called the closing of the venue last year "a huge blow to the community."

"Amos’ Southend was the center of the music scene in Charlotte for 27 years," Brady said. "Now that it’s been announced that it’s coming back, we are already starting to feel that sense of community coming back. I’m so glad to be a part of the past and future of Amos’. I can’t wait to start booking shows for when it reopens."

Ellison opened Amos' in 1990 in the Park Road Shopping Center. It closed for two years early on, then reopened at its Sound End location.

Demolition begins on the new mini-Amos' this week and construction should be underway by August, Ellison said. "We haven't submitted plans to the city yet. The engineer and architects are drawing them up now,' he said.

Until then, break out your old Michael Jackson and Sublime records and prepare for the return of acts like Who's Bad and Badfish, as well as package shows by local metal bands, and lots of other old favorites.