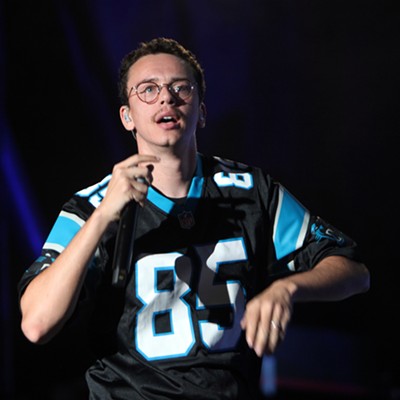 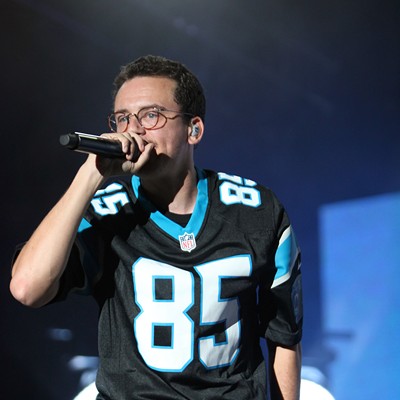 "Peace. Love. Positivity. But also, no fuckboys allowed." Those hard and fast rules were set by Logic the moment he came onstage Tuesday night at the Charlotte Metro Credit Union Amphitheater. It was a beautiful and odd sentiment. Beautiful, because there was such a nice vibe to the crowd. Odd, because most of his crowd consisted of underage white guys. Several times throughout the set, Logic would ask the crowd if they were ready to go home — and, in a call-and- response facilitated by Logic himself, they would scream back “Fuck no!” Interesting considering 80 percent of the audience appeared to be there with their parents.

Logic’s two-hour set consisted of a variety of songs from his mixtapes, Under Pressure and The Incredible True Story and his latest release, Everybody. Sir Robert Bryson Hall II, otherwise known as Logic, has created a rap legacy at just 27 years old. He released his first mixtape in 2009 before signing with Visionary Music Group, eventually landing a contract with Def Jam Recordings.

Known for his compelling lyrics and impressive flow, Logic managed to do a lot more than just engage with the audience. At one point, he asked if there was a birthday in the house, encouraging a 14-yeard old girl to pass her wallet to the front of the stage to prove it to him before rousing the crowd in a chorus of "Happy Birthday." He took a break from the show to bring a 16-year old onstage to play a round of Mario Kart before Super Mario World. He later had a '90s dance off with one of his keyboardists.

Fans were treated to the fast-rapping whiz kid that they’ve come to know and love, yet still got a glimpse at a more vulnerable side of Logic as he conquered his fears and sat down at a piano. “I used to be so scared of this,” he said, launching into a beautiful ballad and showing off his recently earned piano chops. Logic immediately ramped the show back up after finishing, thanking the crowd for allowing him to keep growing as an artist, not just a rapper.