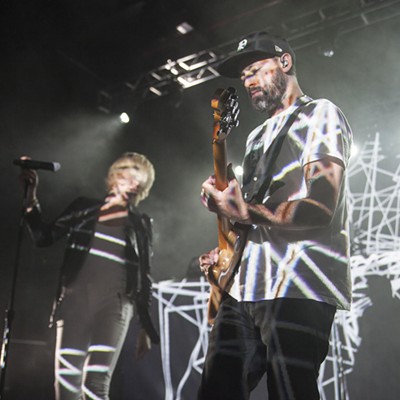 Phantogram, The Fillmore 7/22/2017
By Jeff Hahne
Click to View 12 slides
It hasn't even been a year since Phantogram last rocked The Fillmore in October of 2016, but the electro-rock duo brought a new level of energy to the Charlotte venue on Saturday night. While past tours have focused on creating more of a visual atmosphere, this time around it was high-intensity. From the opening notes of "You're Mine," the band created excitement against a black-and-white backdrop. Focused lighting, occasional strobes and a band sitting on a 6-foot riser at the back created all the visual stimulation the audience needed. Phantogram brings it every time, but this might have been their best Charlotte appearance to date. The night opened with a 70-minute set from the instrumental outfit, Tycho. While the band had its moments, more than an hour was a bit much for getting the crowd warmed up.

Encore
Destroyer
Cruel World
You Don't Get Me High Anymore