It took a few songs to get warmed up, but soon enough, new Charlotte indie-rock trio Chosovi hit its stride.The band might have been making its official debut, but the seasoned vets of the local music scene are no strangers to the stage — just their instruments. Singer Deirdre Kroener (ex-Grown Up Avenger Stuff) is also playing guitar here. Hayley Moran (The Waves and Shot Silk guitarist) is behind the drum kit for Chosovi, and Alicia Driver (Elonzo Wesley, Grievous Angels) is playing stand-up bass. As their comfort on stage grew, so did the songs' complexity, giving insight into the band's bright future.

The show opened with an enthusiastic set from J and the 9s, a hard-rocking Brooklyn, N.Y. glam-punk quartet. A fusion of Iggy Pop and the Runaways, the band is fronted by the effervescent J9, who rarely stops moving once the music starts. Moss made full use of the entire NoDa venue throughout the set. 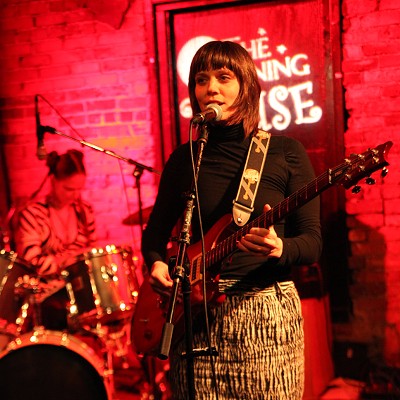