As the calendar creeps closer to Christmas, Charlotteans prepare themselves by participating in a variety of local holiday events. That includes the annual Kissmas Concert hosted by Kiss 95.1 FM. This year’s set of stars was bigger and better than ever, as reflected in the event venue moving to the Spectrum Center (formerly Time Warner Cable Arena). The showcase featured six pop artists: JoJo, Charli XCX, Hailee Steinfeld, Alessia Cara, DNCE and headliner Shawn Mendes.

Unfortunately, though there was plenty of talent and star power in the house, it was overshadowed by poor scheduling, very little production value and sets that felt rushed.

This time around, it was clear that the hosts were trying to cram all of the acts into the four hours allotted for the event (likely in order to comply with the city ordinance stating that amplified noise must not go on past 11 p.m., or perhaps because a good portion of the show’s attendees had to get up for school in the morning). The artists were forced to rush through their allotted time slot, with no time for the banter that audiences live for before rushing offstage to set up for the next act. In fact, the intermissions were often longer than the actual sets—the crowd waited upwards of 20 minutes for a 10 minute set by DNCE.

Despite some apparent difficulties with the planning of the overall show, the featured musical acts managed to show off their musical chops in their small window of time.

JoJo
JoJo, who famously became one of the youngest artists to score a number one hit on the Billboard chart, kicked off the show with some of her long-anticipated new material. Despite being fresh off of winning a number of battles with her old label to get to a place where she could debut her edgy, R&B sound, JoJo put on a great show that was full of energy. Her beautiful voice has only gotten better with time, and she was able to hit notes without even trying that most artists spend years attempting to reach. The crowd loved how she strutted onstage with confidence, belting high notes with ease and playing off of her small band. They especially loved when she brought out Alessia Cara, slated to appear later in the night, out for their duet “I Can Only.” JoJo made the most out of her small set and showed the half-full arena why she’s still a major name in the industry after all this time.

Charli XCX
Charli XCX was next up, playing a 20-minute set that hit on all of her most popular songs. The British pop singer took the stage in a sparkly hat, jean jacket and mini skirt reminiscent of the film Clueless, starting out with a remix of Fancy and filling in for Iggy Azalea flawlessly. She then moved on to her newer material from the recently released After the Afterparty.” Charli XCX had a simple setup, just her, a DJ and three giant inflatable letters. She made good use of all of the room on stage and danced from side to side for every single song, bringing the crowd to their feet to dance alongside her when hits like “Boom Clap” and “I Don’t Care” were played. 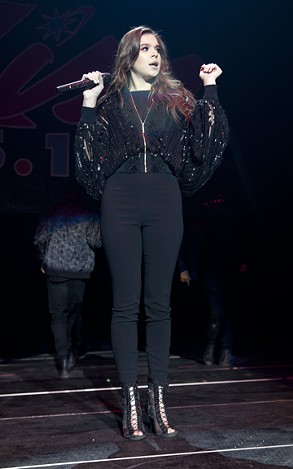 Hailee Steinfeld
Hailee Steinfeld first made a name for herself with an Oscar nod for her performance in True Grit, but it’s her voice that’s been making waves since she appeared in Pitch Perfect 2 (at least until the night before Kissmas, when she learned she was nominated for a Golden Globe for her performance in The Edge of Seventeen). Steinfeld released her debut album this year, featuring songs like “Starving,” which is in constant rotation on Kiss 95.1 and has been certified platinum many times over. She’s just as good live as you’d hope she would be, and quite an endearing presence on the stage. Dressed in head-to-toe black and sparkles, she pranced around showcasing her flawless pipes as her male backup dancers acted out each and every song. Steinfeld is definitely a triple threat and has some major musical chops. 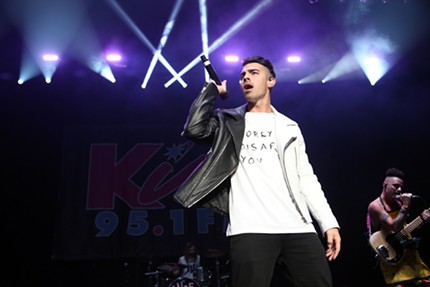 DNCE
DNCE, headed by former Jonas Brothers band member Joe Jonas, were up next after a lengthy intermission. DNCE have been touring nonstop since releasing their first EP, and made a name for their unique, upbeat pop-electro sound. The foursome just released their first full-length album this past month and put on an electric performance fitting of their reputation. Even though they definitely had the shortest set of the night, they at least made everyone in the arena jump to their feet and dance—it was clear they wanted the crowd to feel like they were partying alongside them, and they succeeded. They even managed to squeeze in a medley of '90s hits ("Wannabe" by the Spice Girls and
Oops…I Did It Again" by Britney Spears) before launching into a brief rendition of Kanye West’s “Fade” and their megahit “Cake by the Ocean.” 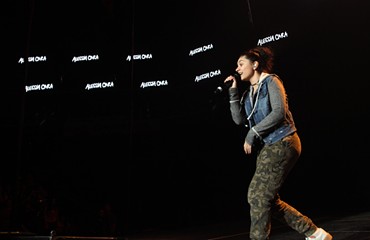 Alessia Cara
Alessia Cara was the penultimate performer for this year’s Kissmas concert. Cara, who was last in Charlotte to perform a small acoustic set at the opening of the Red Eye Diner in the Epicentre, put on a soulful performance and ran through a number of her R&B hits from the album “Know It All.” Cara has made a name for herself by being a pure voice in a crowd of auto-tuned hits. Seeing her live on stage is like getting a peek behind the curtain—the production from her cd is gone, but she proves that she doesn’t need it. She’s got a powerhouse voice that’s impressive for anyone, especially when it’s emerging from the body of a petite 20-year old. 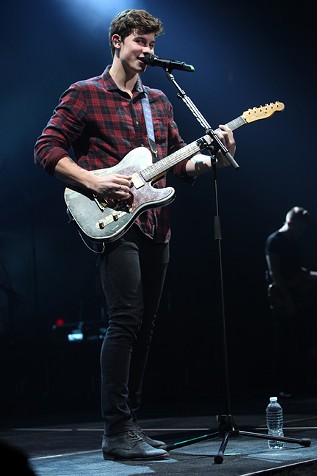 Shawn Mendes
Finally, after Alessia Cara wrapped up her 20-minute set, it was time for the evening’s headliner: Shawn Mendes. Made famous for needing “Stitches,” this singer-songwriter gave the night his all with a rousing five-song set that brought the crowd (female fans, in particular) to their knees. He strummed his guitar and sang his heart out for every single song in the short set, definitely making his small amount of time on the stage count. His time onstage seemed far too short for the buildup that accompanied his name as a headliner, but Mendes did everything he could during the time he was allotted.