A small crowd filled the Fillmore on Sunday night for a dose of politics and music. A series of short speeches gave way to a brief acoustic performance by Jon Bon Jovi with a theme, of course, of getting out to vote.

Cal Cunningham, a former N.C. State Senator, military veteran and former candidate for U.S. Senate, opened the night with a quick chat surrounded by other veterans. Gene Karpinski, the president of the League of Conservation Voters spoke next, warning the crowd about Donald Trump's threats to the future of the environment.

Next up was Josh Stein, a former N.C. State Senator running for N.C. Attorney General. He talked about working closely with Roy Cooper, who finished the speech portion of the evening. Cooper discussed the ways Gov. Pat McCrory has hurt the state's economy and standing in the country.

Those in attendance were clearly there to see one person, however, as the room erupted when Bon Jovi's frontman took the stage. Strapping on a guitar, Jon Bon Jovi cruised through a handful of songs while taking a couple of breaks to speak politically about why he was supporting Hillary Clinton, his friend of 20 years, and reading a letter from a conservative military veteran on why he was voting for Clinton, as well.

Bon Jovi's music got quick makeovers for the acoustic setting, but the crowd sang along just as enthusiastically. Before they knew it, he was closing the set with a cover of "Here Comes the Sun" and only an hour had gone by for the night's event.

The most important take away for those in attendance was, if you haven't already, get out and vote today. 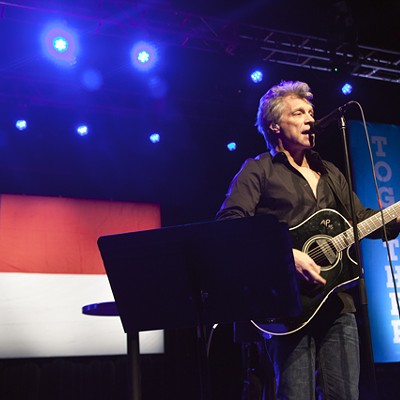